This week marks the 151th anniversary of a great historic coincidence – the opening of the Suez Canal and the launch of the British tea clipper Cutty Sark.

This week marks the 151th anniversary of a great historic coincidence – the opening of the Suez Canal and the launch of the British tea clipper Cutty Sark in the very same week in 1869. When Cutty Sark was launched in Dumbarton, Scotland, on 22 November, it was one of the fastest sailing ships of its day. But the occasion was ‘not altogether happy’, as documented on a P&O-Orient Line menu card in the museum’s collection.

The dinner menu from Oronsay, featuring an illustration of the three-masted tea clipper by David Cobb, notes:

Within seven days of [Cutty Sark’s] completion the China tea trade was radically altered by the opening of the Suez Canal to steamships, a route whose wind systems were no substitute to the clippers for the Trades and the Roaring Forties on which they relied to drive them half across the globe and back. No longer could speed under sail be the yardstick of commercial success. 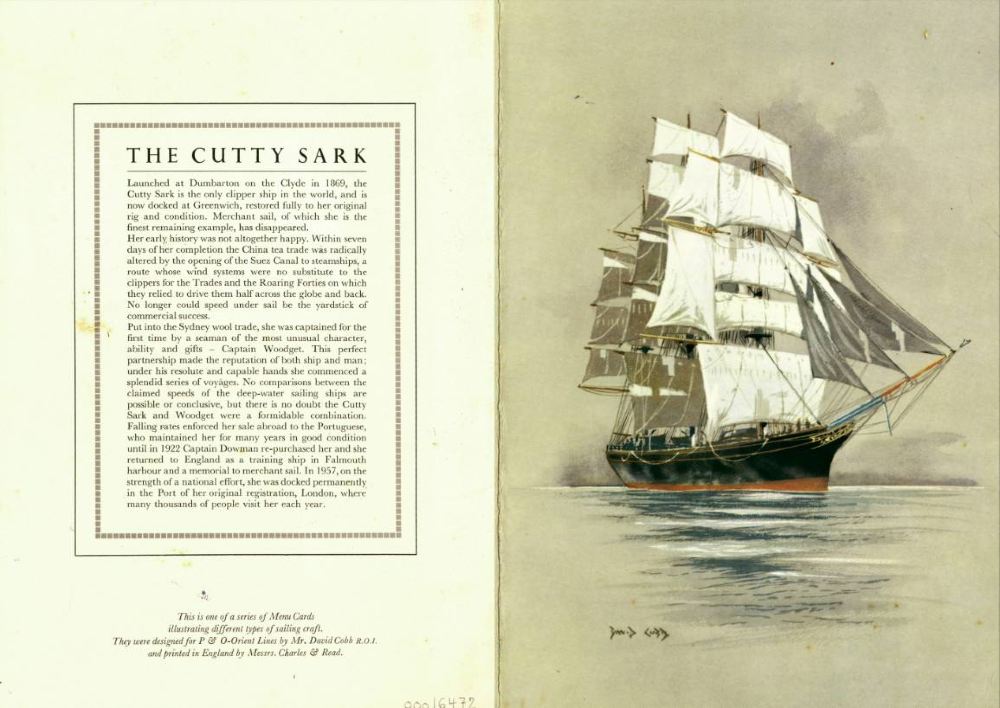 Cutty Sark would make eight return voyages carrying tea from China to England between 1870 and 1877. But it was the opening of the Suez Canal on 17 November 1869 that ultimately marked the beginning of the end for sailing ships like Cutty Sark in the China tea trade. 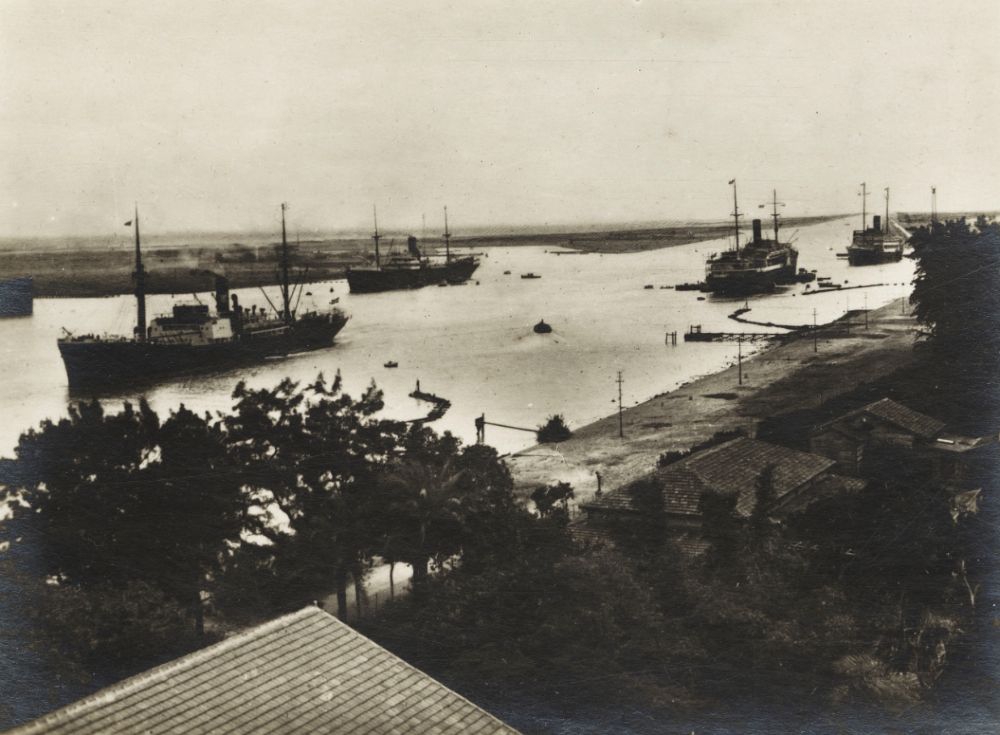 Constructed between 1859 and 1869, the Suez Canal provided steamships with a more direct route from Europe to Asia via the Mediterranean and Red seas, reducing the journey by several thousand miles (compared to sailing around the Cape of Good Hope in Africa). Today, 150 years on, Cutty Sark is displayed as a museum ship in Greenwich, while an expansion of the Suez Canal opened in 2015 to allow vessels to transit in both directions simultaneously over a longer section of the canal. 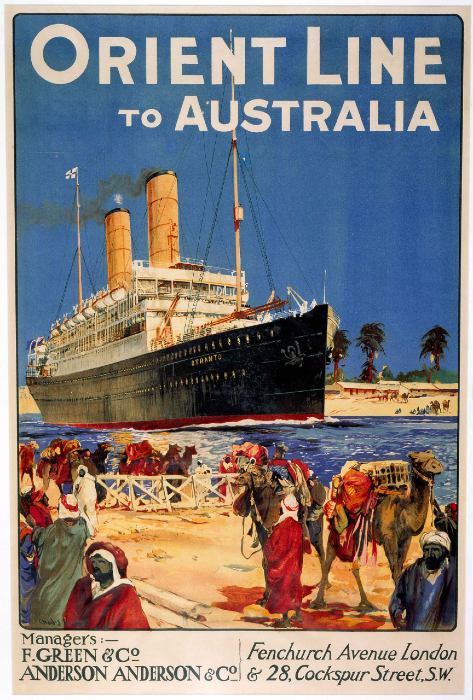 At the museum, we hold a rich collection of objects and diaries recording voyages through the Suez Canal. One of my favourites is a poster advertising the Orient Line service from the UK to Australia, designed by maritime artist Charles Dixon around 1909–1914. The poster portrays Otranto in the canal, with colourfully-robed Arab traders and camels in the foreground. 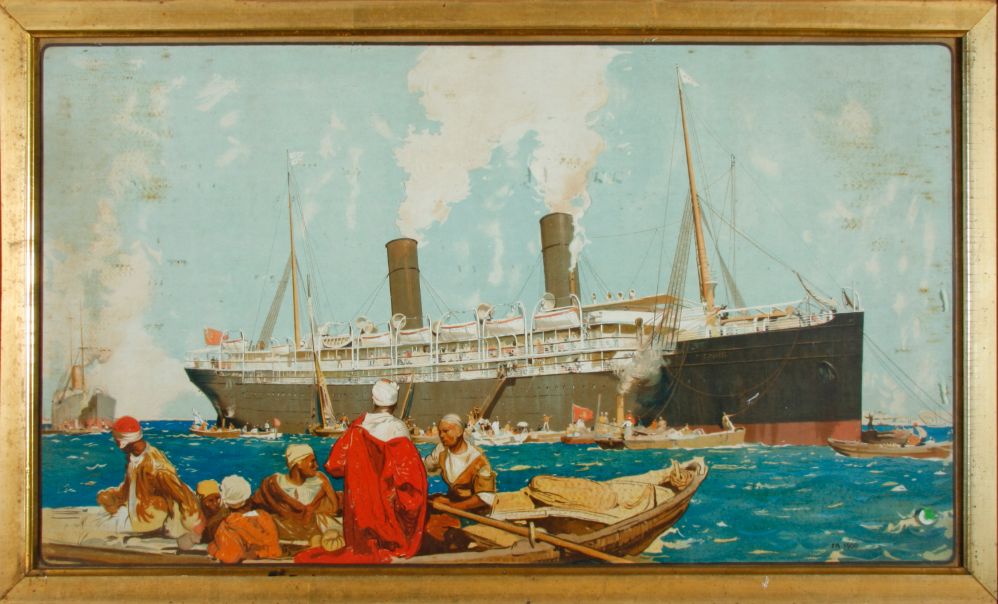 Another similar view appears on a print by Sir Frank Brangwyn and shows the Orient liner Ophir surrounded by traders in bumboats as it travels through the Suez Canal. Brangwyn was a prolific artist, and like many of his European contemporaries, he was strongly influenced by Orientalism and the colours of the Mediterranean and Africa. Both the Brangwyn and Dixon works are not staid ship portraits, but lively depictions of humanity and activity, evoking the daily life of the local traders who are so deeply embedded in the memories of passengers transiting the Suez. 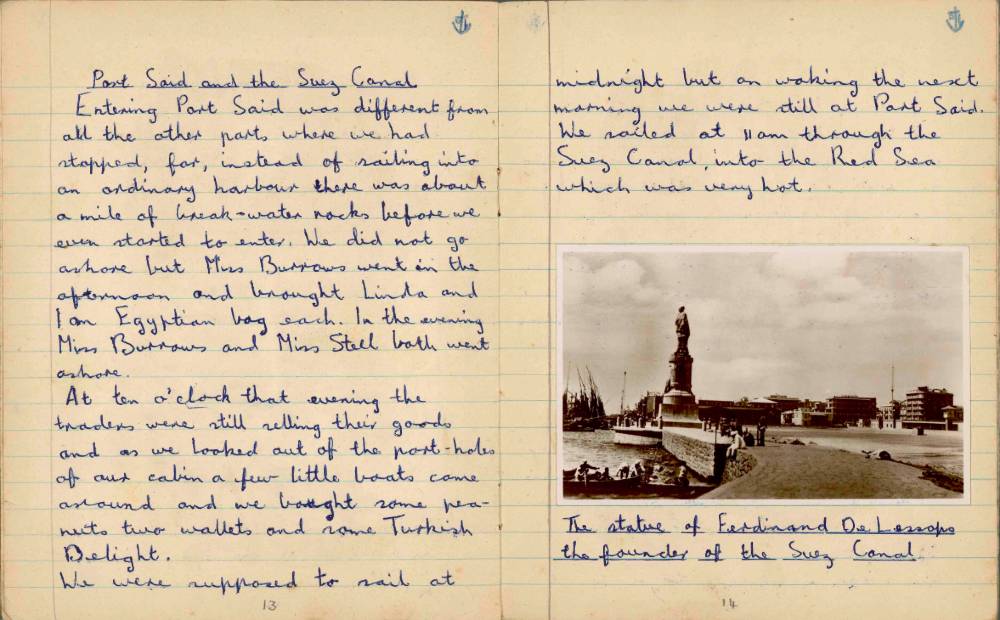 One such passenger was 12-year-old British child migrant Maureen Mullins, who was sent from England to the Fairbridge Farm School in Molong, New South Wales, in 1952. Maureen kept a diary during her voyage on Otranto and writes:

At ten o’clock that evening the traders were still selling their goods and as we looked out of the portholes of our cabin a few little boats came around and we bought some peanuts, two wallets and some Turkish Delight. We were supposed to sail at midnight but on waking the next morning we were still at Port Said [in Egypt]. We sailed at 11am through the Suez Canal into the Red Sea which was very hot.

Another view of the Suez Canal is presented by Croatian artist Gina Sinozich, who arrived in Australia in 1957 with her husband Eugen and children Michael and Jenny. The Sinozich family sailed from the Italian port of Genoa to Melbourne on the Lloyd Triestino liner Neptunia. Gina recalls being captivated by the sight of Arab traders and villages as Neptunia transited the Suez, and she remembers purchasing a souvenir from a vendor selling his wares on the banks of the canal. In its delightfully personal, naïve style, Gina’s painting captures the wonder of seeing new lands and cultures, and evokes the experiences of so many migrants, travellers and traders who have passed through the Suez Canal over the last 150 years.

[Header image: Gina Sinozich, We are sailing the Suez Canal on our way to Australia, 2003. ANMM Collection Gift from Gina Sinozich 00037916]

View all posts by Kim Tao→
Posted in: Migration , From the collection
↑