With plenty of attention focused on the British royal family at the moment, I was delighted to discover a royal connection in a recent addition to the museum’s collection – a framed 1900 print of the Orient liner Ophir in the Suez Canal by British artist Sir Frank Brangwyn. 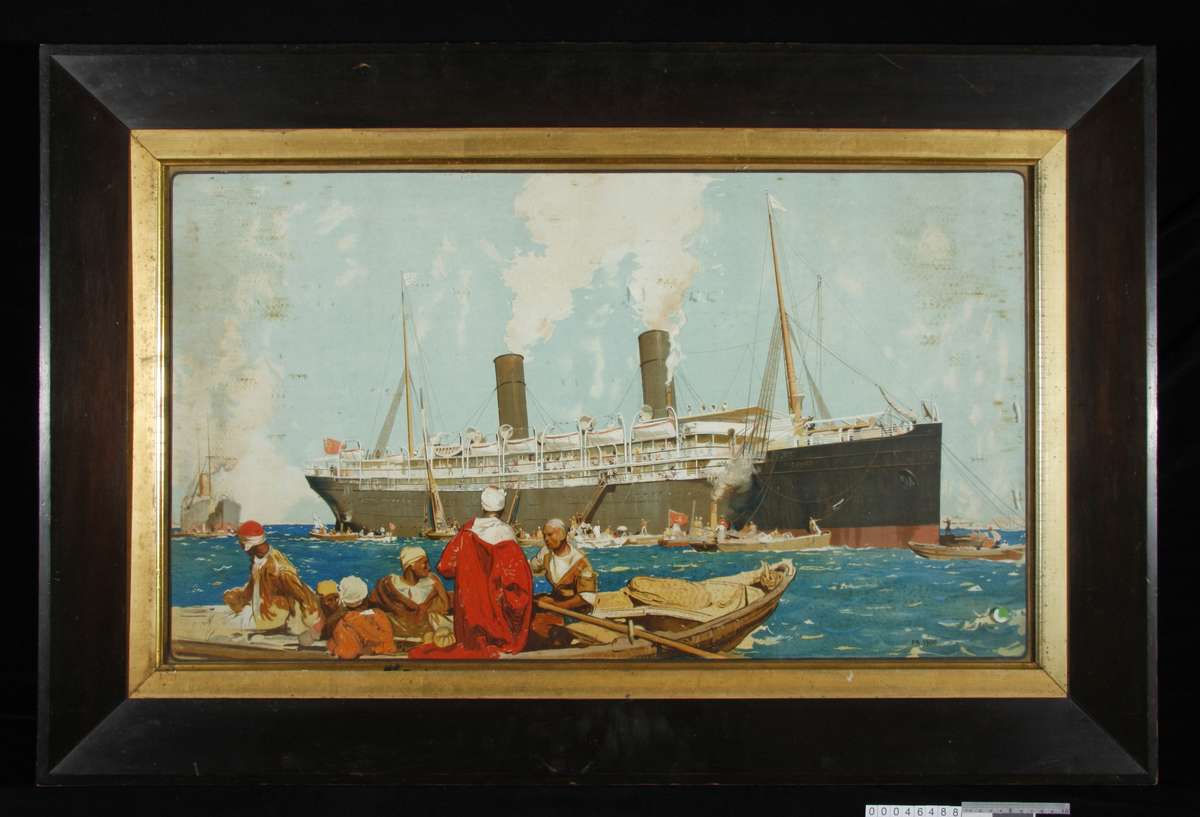 Ophir was built by Robert Napier & Sons in Glasgow in 1891 and was the first twin-screw vessel to operate on the Australian mail service. It was often described as ‘the opulent Ophir’ because of its sumptuously-decorated interiors.

In 1900 it was chartered to the British Admiralty as the royal yacht HMS Ophir for the tour of the British Empire by the Duke and Duchess of Cornwall and York (later King George V and Queen Mary). The main task for the Duke was to open Australia’s new Federal Parliament in Melbourne, but the tour also served to thank the colonies for their assistance during the Boer War. 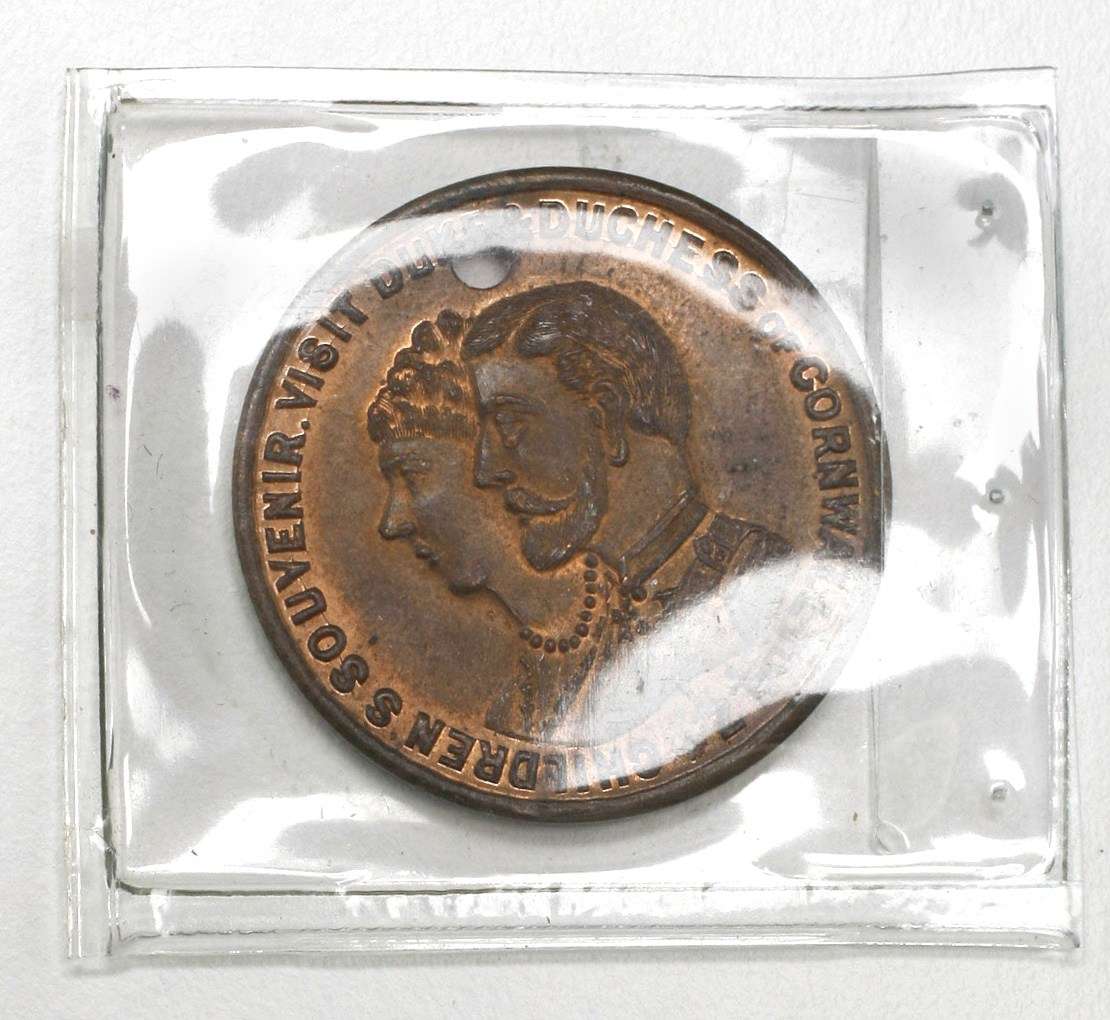 The tour was an outstanding diplomatic success, with thousands of people turning out in each port to welcome the royal couple. The museum holds several mementos from the tour, including a breakfast menu and a souvenir copper medallion issued to school children in New Zealand. 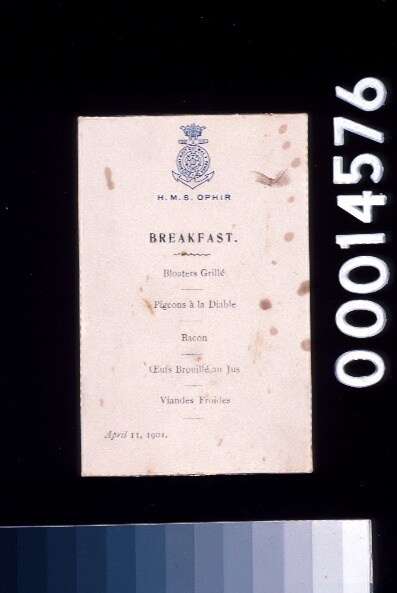 Following the royal tour, Ophir’s popularity soared, helping to sell summer cruises to the Norwegian fjords. However the vessel continued to lose money for the Orient Line because of its high running costs and it started to spend increasing time laid-up. During World War I it was commissioned as an armed merchant cruiser and in 1918 it was purchased by the Admiralty and converted into a hospital ship. Ophir was finally scrapped at Troon, Scotland, in 1922 – a sad end for the former royal yacht.

The museum’s colourful Frank Brangwyn print captures Ophir at the height of its grandeur and popularity, surrounded by Arab traders in bumboats as it travels through the Suez Canal. Brangwyn (1867–1956) was a prolific artist whose favourite subjects included ships and life on the high seas. Like many European artists of the time, he was influenced by Orientalism and the colours of the Mediterranean and Africa.

Art historian Libby Horner writes, ‘[Brangwyn’s] paintings, whatever the title, are usually concerned with the dignity of human labour, and the working man.’ Our print certainly epitomises this – it is not a staid ship portrait but a vibrant picture of how Ophir would have been seen by the inhabitants of Port Said or Suez, when it was a regular visitor on the fortnightly Royal Mail route from London to Sydney.

The long-held belief is that Ophir was named after a gold mining town near Bathurst, NSW. However recent research by the P&O archivist Rob Henderson into the personal papers of the Anderson family (co-founders of the Orient Line) suggests that it was named after the biblical port of Ophir, thought to have been on the coast of Arabia on the Red Sea. A wonderful connection between a vessel, a shipping company and an artist so inextricably linked with the Orient and the exotic sights and delights of travel by sea!

View all posts by Kim Tao→
Posted in: From the collection , Vessels
↑