"Like most children I found the voyage a marvel. My brothers and I had never even seen a big city like London before our proposed emigration. Now we were seeing the world." David Hill 1959

The uncertainty of departure quickly gave way to excitement as children discovered a new world on board ship. With their escorts children explored the decks and found new places to play. They spotted whales and porpoises and called in at exotic ports.

"I awoke very early and sat on the deck waiting for my first glimpse of Australia as we approached Fremantle." Jim Stone

Child migrants sailing to Australia in the 20th century experienced the luxury of passenger liner travel – comfortable cabins, sumptuous cuisine and silver service. They passed the long sea voyage with deck games, hide and seek, swimming, lessons and speculating about their future.

The exhibition includes examples of letters sent back to Quarriers by child migrants en route to Australia in the 1960s. They are addressed to Mr Munro, who was the Superintendent. They describe some of the exotic places the children visited, and experiences that impressed them, during their long voyage to Australia. 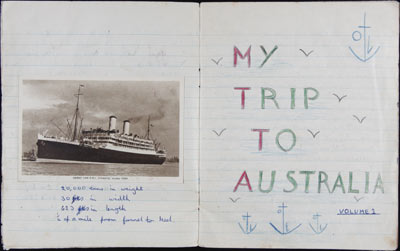 Twelve-year-old Maureen Mullins recorded all the sights and delights of her trip on 'SS Otranto' – the "gigantic" Rock of Gibraltar, a funicular ride and "real Italian spaghetti" in Naples, bathing in the Mediterranean Sea, and sampling sugar bananas and coconuts in Colombo. 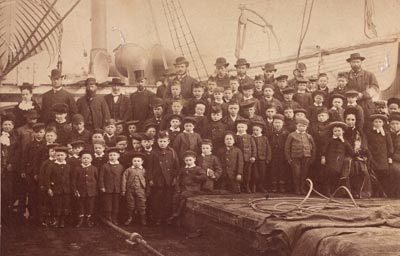 Quarriers boys sailing to Cananda on board 'SS Norwegian' in 1885. Reproduced courtesy Quarriers.