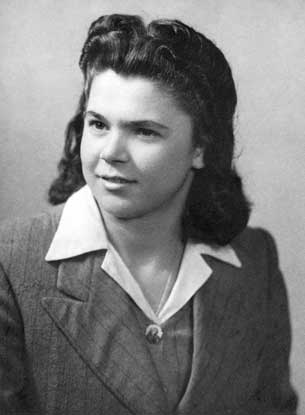 Like many refugees after World War II, artist Gina Sinozich abandoned her homeland for a destination she knew almost nothing about. From 1956–57, she and her family made the voyage from Istria, Croatia, to Australia.

It was Gina who made the decision to leave. After World War II, Croatia was absorbed into the Communist republic of Yugoslavia, governed by Marshall Josip Tito. Life for the Sinozich family was difficult and food was scarce. Gina wanted a more secure future for her children, Michael and Jenny.

In April 1956 Gina and her children slipped across the Italian border on the pretence of visiting her mother in Trieste. Gina’s husband Eugen followed several months later. Gina could not risk telling anyone, even close family, that they were leaving. ‘We left everything’, she says. ‘We didn’t take nothing with us, not even a photo.’

Gina applied for political asylum in Italy and was sent to a migrant hostel in Udine sheltering 3,000 other refugees. It was ‘not a happy place’, Gina recalls. Food was monotonous: ‘every day was macaroni and tomatoes and powdered milk.’ Several families were bundled into the same room, and refugees lived in limbo waiting months, sometimes years, for their papers to be processed.

After 18 months, Gina finally found her family’s name – ‘Sinozich departing Genoa’ – on the hostel notice board. Asked to choose between Australia and Canada, Gina and Eugen chose Australia, ‘a new country’ that they believed offered greater opportunities for their children. Gina treasured her ticket for SS Neptunia. ‘At last we were going somewhere’, she says. ‘Just to go away from the hostel and start something positive.’

In July 1957 Neptunia departed Italy for Australia. ‘The boat was beautiful inside’, Gina remembers. ‘We had a second-class dining room and a bottom-class sleeping quarters. There was always vino at every meal. They would have magic shows, English classes, picture shows. And I saw huge whales – it was the first time I saw whales.’

After a month at sea, travelling the Suez route, Neptunia finally docked in Melbourne. Gina recalls, ‘It was a beautiful day. I was so happy. Finally we put our foot down on the soil that we wanted.’ The family spent several weeks at Bonegilla Migrant Reception Centre near Wodonga, Victoria, before moving to Sydney. Gina remembers that Bonegilla, with its private rooms, ‘smorgasbord’ of food and ‘even a little bit of pocket money’, seemed paradise compared to the trials of Croatia and Italy. ‘I could never forget it. The table was full of meat and there was this big dish of fresh milk. And the people from the kitchen said take as much as you like. Can you imagine giving the kids fresh milk after 18 months?’

In 2000, when Gina was 70 years old, she completed her first painting. In 2003 ANMM commissioned Gina to produce a series of 14 paintings depicting her journey from Croatia to Australia. Naïve in style and playful in tone, they tell an intensely personal and powerful story of hope, loss and courage.