When you visit the Australian National Maritime Museum, be sure to wander along our beautiful waterfront space

Discover our historic lighthouse, landmarks, sculptures and what lies beneath!

The museum is thrilled to announce that TOMRA has provided sponsorship for a permanent Seabin at the museum, that will not only collect rubbish but also help us raise awareness and educate people on the issue of marine pollution. The museum was proud to host the Australian trial of the Seabin on World Oceans Day 2018, which was such a success that the Seabin returned in August for a special two-week installation during National Science Week.

The Seabin is a practical, on-the-ground approach to reducing visible waste in public waterways.  Take a stroll along our waterfront and visit the museum’s Seabin, now on display – and hard at work collecting rubbish.

Find out more about the Seabin in our blog. 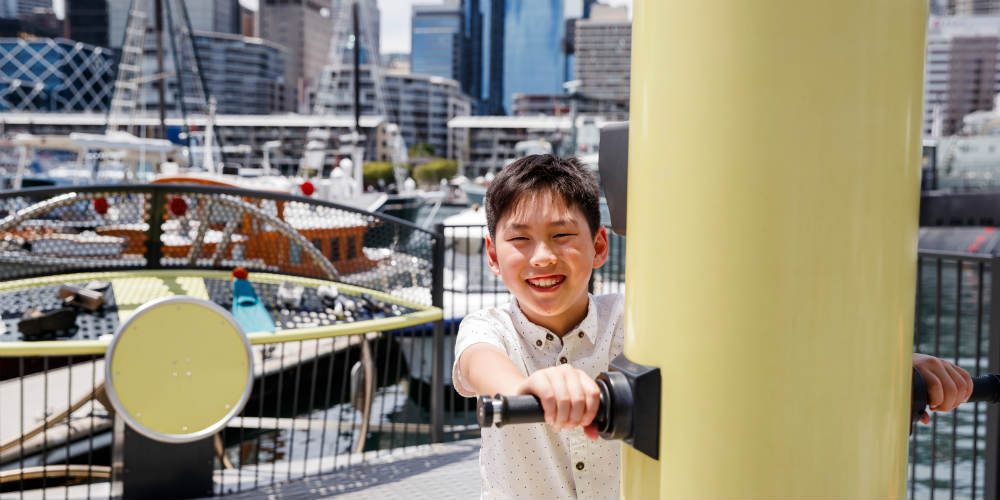 Come aboard our interactive science pontoon to investigate what happens when things end up in the harbour and take a peek beneath the waves. The ’Submerged Stuff’ exhibits reveal what happens to different objects when they're immersed in seawater. Compare sunken objects to identical ones that have stayed out of the water, and to items made from different materials: What copes and what corrodes? The reverse ‘Periscope’ lets you take a 360 degree peek beneath the pontoon, and check out the sea life below.  What makes its home around the maritime museum’s wharves?

Formerly known as the Vernon Anchors, these two long-shank anchors are thought to have been used to moor the Nautical Training Ship Vernon, a floating  and reformatory operated by the Colonial Government in 1867. In the late 1980s the anchors were rescued from a marine depot yard at Birchgrove, Sydney, and later moved to Goat Island. In 1990 they were donated by the Seamen’s Union of Australia (now the Maritime Union of Australia) to the Australian National Maritime Museum for use as a memorial to seafarers. The anchors are the largest known early-19th-century Admiralty anchors in Australia and their long association with the working harbour of Sydney makes them a fitting tribute to merchant seafarers.

More information on the anchors.

During World War I, Australia’s only remaining submarine, HMAS AE2, made a daring and hazardous incursion into the Dardanelles and the Sea of Marmara, playing a game of cat and mouse with the Ottoman torpedo boat Sultanhisar. Entitled Johnnie and Mehmet, the two figures - sailors from AE2 and Sultanhisar respectively, former enemies - meet again today at the museum in the context of the friendship between Australia and Turkey. They perform a visual ceremony of remembering which is kinetic and aural, signalling to each other in semaphore-like movements derived from maritime languages, punctuated by sounds from the maritime world, ceremonial and atmospheric at the same time.

Read more about the AE2 and this artwork here.

This unusual looking boat could have the most important job in our fleet! It is a fully-enclosed survival vessel designed to give tanker crew a safe exit, offering protection from burning oil and dangerous gases. The lifeboat is designed for ships or offshore installations. Its hatches hermetically seal and special features include a compressed-air passenger breathing system and a seawater pump to spray the entire boat for cooling. The lifeboat will even right itself after turning 360 degrees. It is owned and operated by the Sydney Institute of TAFE Marine Technology Centre and is used for training.

NOTE: The Lighthouse's lantern room and balcony are currently off-limits due to safety concerns. These issues will be resolved as soon as possible. By 1874 many ships had run aground at Cape Bowling Green. This low sandy spit south of Townsville, Queensland, was in dire need of a lighthouse to help ships serving North Queensland ports. The lighthouse was built from local hardwood and clad with iron plates imported from Britain. Staffed by a keeper and three assistants, it was moved twice when threatened by the sea. When an automatic acetylene light was installed in 1920 (operated by a sun valve), the lighthouse was de-staffed. In 1987, it was replaced by a modern tower. It was transported to the museum in 1994, re-erected on our North Wharf and fitted with the type of clockwork and kerosene mechanism used in 1913. Free guided tours operate daily - check times at the ticket desk in the museum foyer.

Follow the instructions to create your own model of the Cape Bowling Green lighthouse. 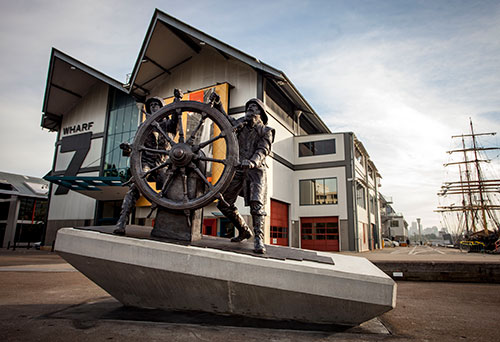 Windjammer Sailors is a stunning bronze sculpture of two sailors at the wheel, wrestling with the helm in heavy weather - a very common moment of peril on any long sea voyage. Executed in a figurative realist style in full life-size scale this waterfront sculpture pays homage to sailors in the 19th and early 20th centuries who often risked their lives in perilous weather to sail wind ships (windjammers) carrying critical cargoes in and out of Australian ports to foreign lands. The work is based on a concept by Australian artist Dennis Adams (1914–2001) which has been modelled by sculptor Brett Garling and was cast at the Australian Bronze foundry at Sydney’s North Head.

You can find out more about the work and its creator Dennis Adams here.

A signal mast is used for hoisting signal flags that send messages to vessels. This 20.7 m (68 ft) signal mast was erected in 1912 at the Royal Australian Navy's Garden Island Dockyard, Sydney. Pennants (flags) were flown from it with messages to naval vessels in the harbour. While it looms large now, the original signal mast was over 70 metres high! In World War II, the middle section was removed because it was a hazard to flying boats taking off from Rose Bay.

In 2015 we unveiled an art installation by leading Australian artist Warren Langley to commemorate the disappearance of submarine HMAS AE1 and the loss of its crew during World War I. The work evokes a large steel wreath which shines in the daylight and is lit from concealed lights underneath during the evening. The concept for the work of art arose from the mysterious circumstances of the submarine's disappearance. The resting place of AE1 finally discovered, more than 100 years after its disappearance, by a team from the museum, the Royal Australian Navy and the Silentworld Foundation in late 2017.

You can read more about HMAS AE1 and its discovery here

In one of history's great migrations, more than ten million people have crossed the world to settle in Australia. Was your family among them? The Welcome Wall stands in honour of all those who have migrated to live in Australia with registered names permanently engraved in bronze.