Our latest exhibition, Fire on Water's Edge, explores the bushfires that devastated huge tracts of coastal Victoria and New South Wales over the summer of 2019–20 through the words and images of navy personnel and surf life savers. The exhibition also examines the immediate response to the events through the artists of the Bushfire Brandalism collective, their works making a strong plea for climate action in the wake of destruction.

14:00 hours: As we punched through the cloud wall we went from daytime to pitch black conditions in about 20 seconds. Lieutenant Commander Jack Wadey, pilot, Fleet Air Arm 808 Squadron

It was like a jet engine, the only way you could really describe it. Chris Parker, Mallacoota resident and Country Fire Authority volunteer

31 December 2019: A catastrophic fire day for coastal communities in Victoria and southern New South Wales. It was a cataclysmic peak to what had already been a gruelling month. The Currowan fire ignited on 26 November, and a month later merged with the Tianjara fire front to create a single mega-fire stretching some 120 kilometres from Batemans Bay to Nowra. The Clyde Mountain and Comberton fires were still burning, leaving three-quarters of the Shoalhaven region ablaze. 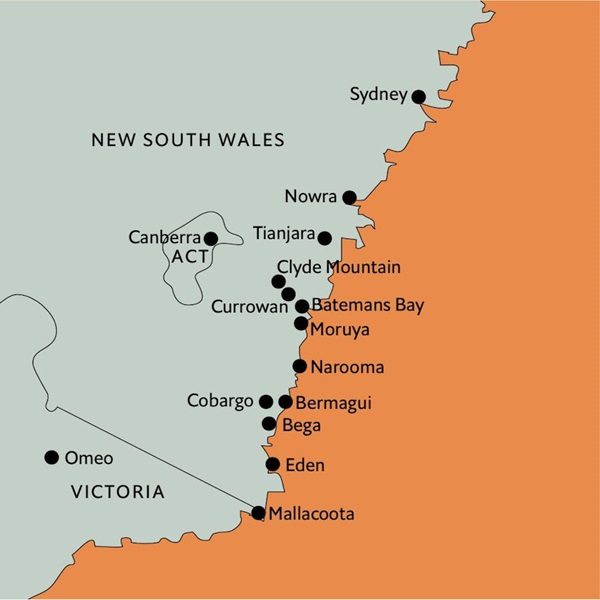 Lieutenant Commander Jack Wadey arrived at Fleet Air Arm (FAA) base HMAS Albatross in Nowra at 6 am on New Year’s Eve. He knew that it would be a difficult day. He did not expect it to be the most challenging flying day of his life.

Jack and the crew of the MRH-90 helicopter were initially tasked for the small inland town of Cobargo, where residents needed medevac support: ‘The entire area was black and nearly all the properties, houses and outstations were destroyed,’ Jack recalls. 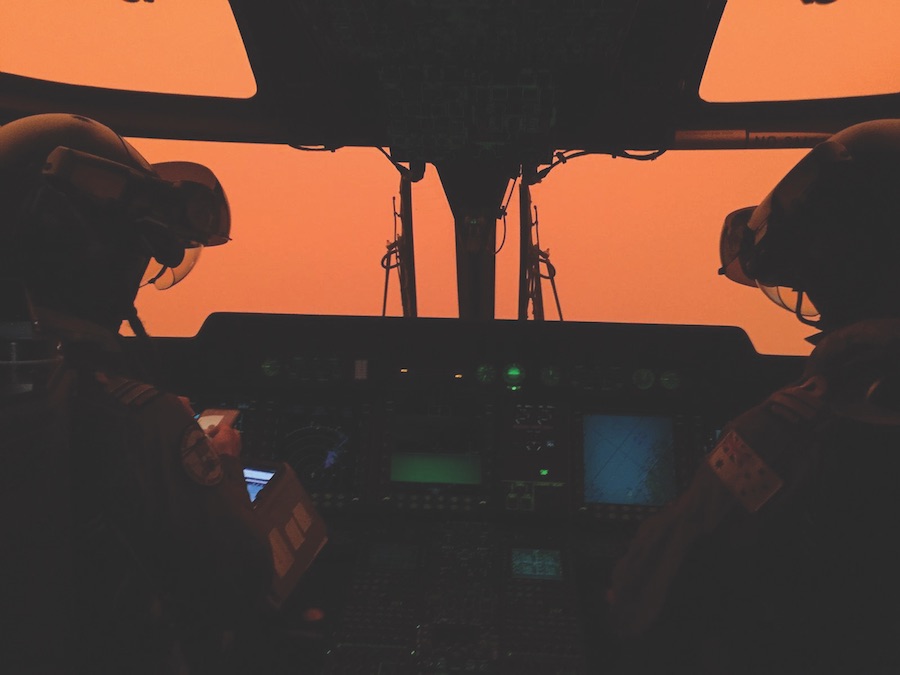 After Cobargo, the crew of the MRH-90 tracked for the Marabrine Fire Trail, where three injured personnel needed assistance. An RFS wireman aboard the helicopter was winched to the location. Visibility was rapidly deteriorating in the area and Jack saw a wall of smoke approaching from the west. This was a harbinger of an unusual and extremely dangerous storm system called a pyro cumulonimbus – a storm created by an intense bushfire coupled with dry clouds and lightning.

As aircrew we practise departing a known area, such as an airfield, and getting ourselves by Instrument Flight Rules to Lowest Safe Altitude [LSALT]. What we don’t practise is getting from an unknown area to LSALT in mountainous unfamiliar terrain using FLIR [night vision] and a moving map in 40 knots [75 km/h] of wind in the middle of a fire storm.

Despite the approaching storm, the MRH-90 helicopter successfully recovered the RFS wireman after he and the people on the ground had determined that it was safe for them to stay. For the next nine hours, Jack and his crew tirelessly responded to calls for support, at one point refuelling their helicopter while under ember attack.

Further down the coast, Chris Briggs was engaged in his own unexpected bushfire relief effort. Just a few days before, Chris and his Pambula Surf Life Saving team were competing in the inaugural George Bass Surf Marathon at Batemans Bay. Conditions were smoky, and there were concerns about air quality. They completed two stages of the race, Batemans to Moruya and Moruya to Tuross Head, before it had to be cancelled. 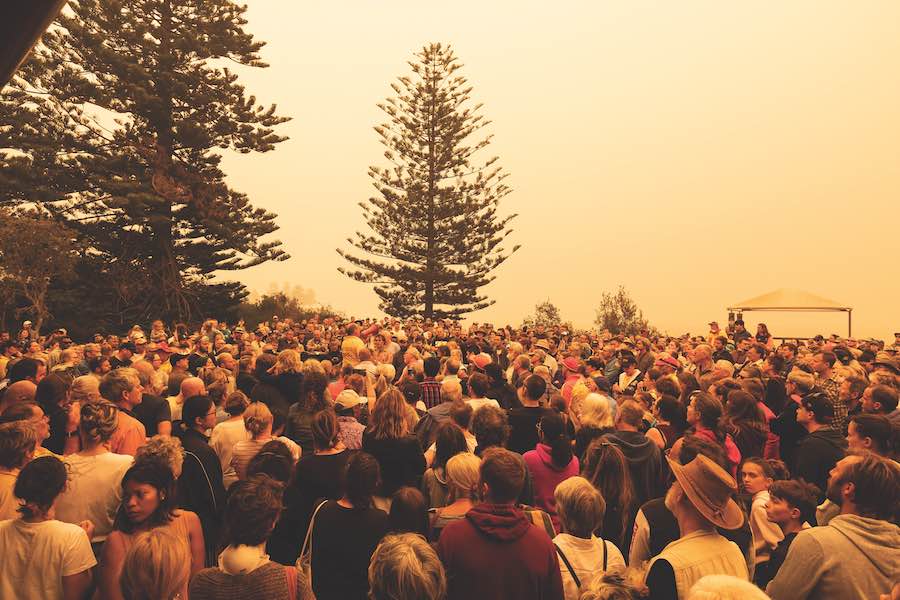 Chris woke at his camping spot at Bermagui on the morning of 31 December to a blood-red sky. Local residents and holidaymakers were fleeing to the beach and local clubhouse to shelter from the encroaching fire front. Chris jumped into action to help the thousands of people stranded on the beach.

I had an empty ute so I ended up doing runs over to the supermarket and picking up pallets of water and toilet paper. The rest of our club started cooking food, the guys cooked thousands of sausage sandwiches for the day. Some people went off to find fuel for generators.

As the day wore on, the situation deteriorated:

At one point we all had our surf club radios spreading the word around. There was nowhere else to go without going to the water. We had all our IRBs [inflatable rubber boats] down at the wharf and our crews ready to go.

Over the Victorian border, in the Gippsland town of Mallacoota, Chris Parker woke to a similar sky. A fire had begun at the Wingan River, south-west of Mallacoota, the day before, and Chris was brought into a local Country Fire Authority (CFA) meeting, where he was part of the small contingent of firefighting resources.

The local sergeant from Canberra, Stuart Johnson, made it extremely clear to us all that we were on our own. We got two fire engines and a slip-on [portable firefighting unit], and [he said] that we needed to go home and prepare whatever we needed to for ourselves and then make our way back to the station when the fire was due to impact us.

Support did arrive for Mallacoota. Later that day, CFA strike teams arrived, and then in less than two days the Royal Australian Navy’s amphibious landing vessel HMAS Choules was moored off the beach. These efforts went to great lengths in aiding the community – HMAS Choules evacuated 1,100 people on its first visit and provided critical support to local CFA and emergency relief organisations. But in these unprecedented conditions, there was only so much even they could do. Chris Parker says, ‘Both my sisters lost their houses in the fires, along with roughly another 100 or 120 other local residents.’

By the end of February 2020, the fires had burnt more than 12 million hectares of land across the Australian continent, killing 34 people and over a billion animals. Three thousand homes were destroyed, more than 500 of them in the Eurobodalla shire alone, on the New South Wales south coast. 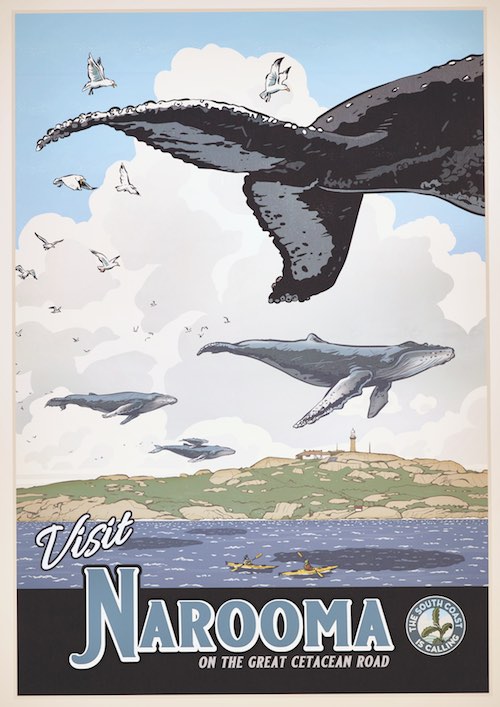 In Fire on Water’s Edge we explore the interconnected narratives of people like Jack Wadey, Chris Briggs and Chris Parker, who experienced the historic bushfires of 2019–20. The exhibition then looks at the public response to the fires through the words and works of contemporary artists from the Bushfire Brandalism Collective, whose posters make a strong plea for action at a time of climate crisis. An understanding of Indigenous knowledge systems is key to battling this crisis, as seen in the exhibit through the words of senior Yuin Elder Uncle Max Dulumunmun Harrison.

Creative forms of aid relief, such as David Pope’s ‘South Coast is Calling’ posters, hope to kick-start economic recovery by drawing visitors back to communities affected by bushfires. Combining the styles of early-20th-century tourist posters and Japanese woodblock prints, these works remind us that, while damaged, the communities of the south coast are still beautiful – and more in need of visitors than ever before.

Central to Fire on Water’s Edge is the process of recovery. Jody White from Eden Killer Whale Museum notes that while the South Coast landscape is beginning to regrow, recovery is far from complete: ‘There’s no escaping it. You can’t just go somewhere and not be reminded of that time.’

Fire on Water's Edge is currently on display outside the museum's Wharf 7 building. Be sure to dive in before November to view this free photographic exhibition.

Promoted charities for the exhibition are Red Cross Disaster Relief and Recovery, Mallacoota Fundraising Group and Social Justice Advocates of the Sapphire Coast, offering visitors the opportunity to give back to affected communities.

View all posts by David O'Sullivan→
Posted in: Arts and Culture
↑