Plastic pollution has become ubiquitous in our oceans and on our shores. Beach Couture is a free exhibition by 'artivist' Marina DeBris who wants to raise our awareness to this growing problem.

Sadly, it is predicted that by 2050 there will be more plastic in the ocean than fish. In Australia, two out of three sea birds are affected by plastic. These figures are alarming enough, but they were estimated before the current global pandemic, which has only exacerbated the problem.

COVID-19 has meant that many reusable items and modern methods of recycling have been abandoned in favour of single-use, non-recyclable items in a desperate attempt to reduce person-to-person contact. These include plastic bags, plastic cutlery and single-use coffee cups – many of which will end up in our oceans. Items of personal protective equipment (PPE), including disposable face masks, latex gloves and hand sanitiser bottles, have already been spotted on our beaches and shores. Following a tragic incident in which 50 shipping containers were lost overboard the APL England in heavy seas, large quantities of various goods, including face masks and take-away containers, were found washed up on Sydney’s south coast.

The Ones That Got Away by Marina DeBris. Photo by Nic Walker, modelled by Laura Wells, hair and makeup by Kerry Jane Bailey. Commissioned by TOMRA

In France, clean-up charity Opération Mer Propre (Operation Clean Sea) has reported an alarming number of face masks and gloves on the sea floor throughout the Mediterranean. Recently, a survey conducted by OceanAsia found that masses of face masks had washed up on the shores of the Soko Islands off Hong Kong. Most disturbing is the fact that latex gloves take decades to break down, while synthetic woven masks have an estimated life span of 450 years.

Contrary to popular belief, when plastics do eventually begin to break down, they do not simply disappear. Instead they become microplastics, which release chemicals that are often ingested by marine life. These can then enter the human food chain. The impact that these microplastics have on marine life and on humans is not yet known.

But just how do we communicate the importance of keeping plastic waste out of our oceans? While much attention has been focused on the impact of COVID-19 on humanity and the economy, little attention has been paid to the impact that the pandemic will have on the environment. Occasionally, overwhelming statistics or heartbreaking images of marine life entangled in plastic waste appear in the media. In a modern world with a declining attention span, however, the impact that such images might have on audiences can be fleeting. 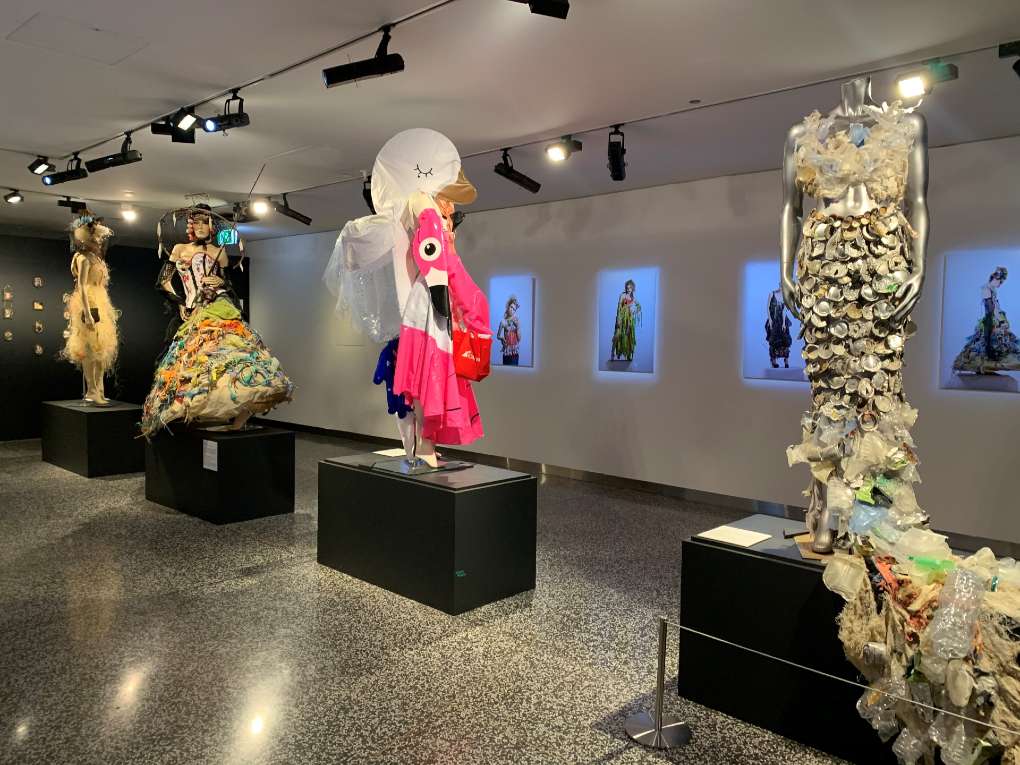 The work of Australian based ‘art-ivist’ (art activist) Marina DeBris provides a unique method and powerful vector for communicating the harm that we are causing our oceans. For Marina, each day starts by cycling to her local beach, Coogee, and collecting rubbish – a daily outing from which she is yet to return empty handed. Her obsession with collecting rubbish began after moving to Los Angeles. Her daily runs along Venice Beach were consistently interrupted by an instinct to stop and collect rubbish to maintain the beach’s beauty. After realising that her efforts were achieving little in the grander picture of ocean pollution, Marina turned to art to raise awareness and demonstrate just how little of what we use is being reused or recycled.

‘Trashion’ is one such method that Marina uses to convey this message. Though from a distance her wearable pieces might look like high-end fashion, closer inspection reveals a far more sinister truth. Marina’s trashion collection, titled Beach Couture, is made entirely of the rubbish that she has collected on and near the beaches of Sydney and Los Angeles. Utilising a fusion of humour and creativity through works such as Do I make myself clear and The ones that got away, Marina visually communicates to audiences that the waste we create will come back to haunt us. Marina’s trashion is featured in museums, galleries, publications and live trashion shows throughout Australia.

The Inconvenience Store that Marina created also represents a unique method for encouraging audiences to question their use of single-use plastics. This installation mimics the content and setup of a typical convenience store, yet is filled with repackaged items that have washed up onto beaches. Here, audiences are confronted with familiar items that they themselves have likely bought and discarded, such as sunglasses, water bottles, thongs and fishing gear, to name a few. The Inconvenience Store has travelled around Australia and was featured at Sculpture by the Sea in 2017, where it won three awards. 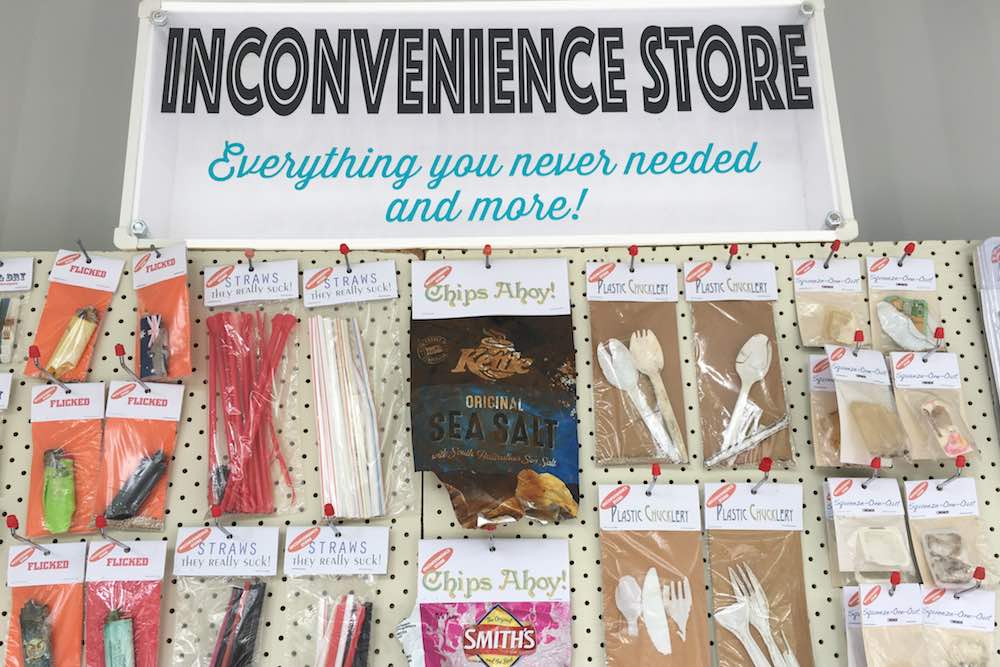 Rather than presenting the issue of ocean pollution through overwhelming statistics, Marina’s art makes this issue personal to the viewer. Marina’s trashion and Inconvenience Store force audiences to come face to face with the single-use items that we use daily and often discard without a second thought. It reminds audiences that we are the problem and that we can also fix it by changing our habits. Her work reminds us that many of the single-use plastics that we use are optional and that the harm that they can cause the environment far outweighs the short-term convenience that they can offer us.

Be sure to dive into the museum to visit Beach Couture, a free exhibition at the museum until 18 April 2021.

About the author: Rachel Hart is a museum and heritage studies postgraduate student from the University of Sydney who is undertaking an internship at the Australian National Maritime Museum.

View all posts by ANMM Guest→
Posted in: Exhibitions , Oceanography
↑