Sydney's sun-spangled waters are central to the city’s national and international reputation. But just how much life lies submerged, hidden away from the above-water pressures of Australia’s biggest city and its ever-sprawling human population, beneath our most iconic landmarks, beaches and headlands?

Geologically, Sydney Harbour is a river valley that was drowned as the sea level rose about 11,000 years ago at the onset of the present interglacial period. But from a marine ecology perspective, it’s one of the world’s most modified estuarine systems. Along with Port Hacking and Botany Bay to the south and Pittwater and the Hawkesbury River to the north, the harbour is one of a series of deep waterways in the Sydney Basin that all drain along a shallow coastal strip between Palm Beach and Cronulla.

Interconnected rocky reefs along this stretch of coast are separated by swathes of mobile sediment that have adapted to withstand large and powerful waves. In the shallows, these reefs are covered in forests of seaweed that shelter common sea dragons feeding on swarms of tiny mysid shrimp. Also living here are giant cuttlefish, which have pigment organs called chromatophores in their skin that change in an instant, both in colour and texture, to transform these behaviourally complex creatures from flamboyant billboards to masters of disguise. Down in deeper waters, the reefs are covered in a living veneer of colour created by gardens of sponges, ascidians and tunicates in all shapes and sizes.

Blue gropers are a recurring and much-loved element of Sydney’s coastal life, famed for their tame behaviour, large size (up to 40 kilograms), blubbery lips and peg-like teeth. Just one or two dominant males usually occur within an area, along with a larger number of females. When a male dies or moves away, the largest female changes sex to become a replacement male. Many of Sydney’s resident gropers – such as ‘Bluey’ off Clovelly Beach – have been affectionately named by adoring locals. 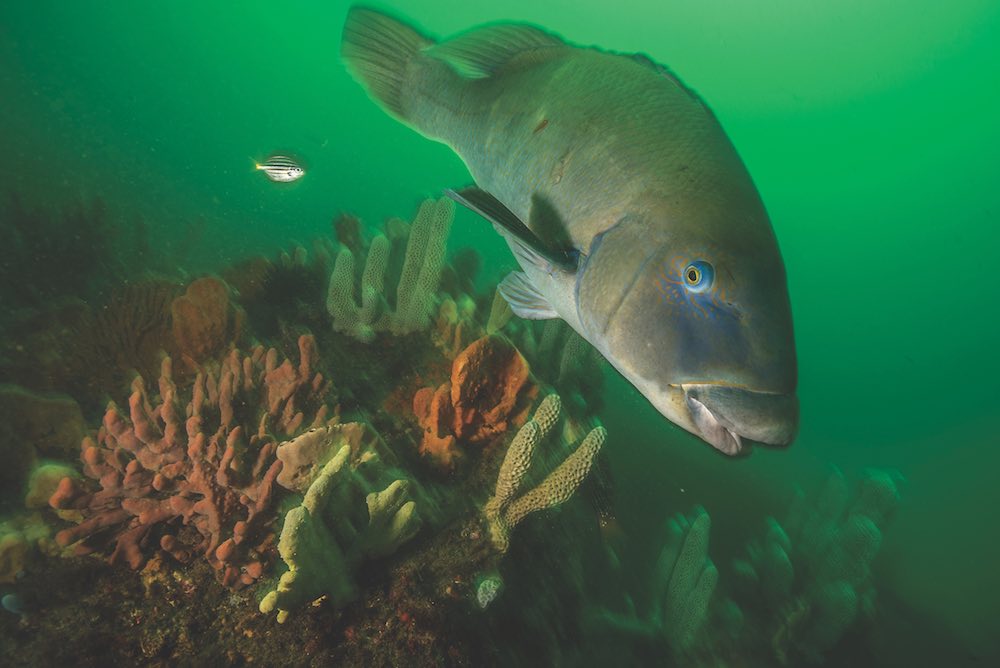 The charismatic eastern blue groper is only found off south-east Australia, and is regularly encountered off Sydney's rocky reefs © Justin Gilligan, all rights reserved

Seven aquatic reserves protect some of Sydney’s most accessible and biologically diverse coastal areas. Cabbage Tree Bay Aquatic Reserve at Manly is one of the most popular, where snorkellers can experience southern eagle rays, dusky whaler sharks and crimson banded wrasse, often swimming around the occasional discarded junk such as an old motorbike.

Stands of marine vegetation – including mangroves, seagrass and saltmarsh – provide isolated oases for wading birds such as stilts and pelicans, and habitat for juvenile fish and marine invertebrates. Seven species of seagrass are known from Sydney Harbour, with most found at shallow depths in outer harbour areas. Knowing that mangroves have been a declining habitat worldwide, it’s reassuring to find that the total mangrove cover in Sydney Harbour has increased since European settlement. In contrast, however, the extent of saltmarsh has declined dramatically due to foreshore development, with only an estimated 37 hectares remaining. 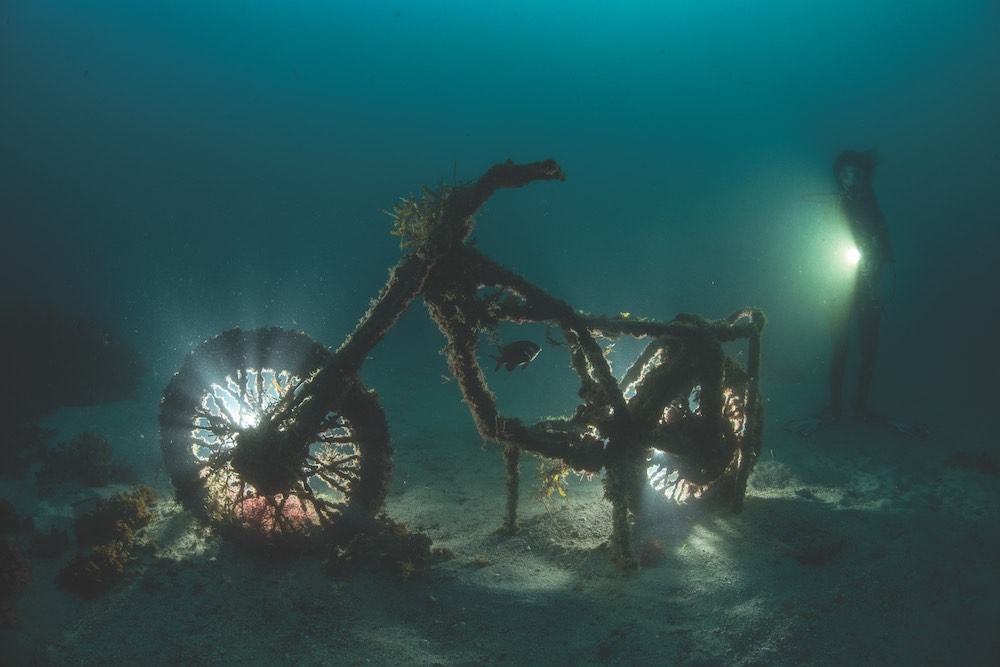 A discarded motorbike transforms from trash to treasure by creating habitat for small fish and invertebrate growth in the Cabbage Tree Bay Aquatic Reserve off Manly © Justin Gilligan, all rights reserved

These days the installation of marine infrastructure requires consideration of the marine environment through the planning and approval process. Developments over marine vegetation, for example, are heavily regulated, with significant penalties for unauthorised harm to plant species.

It’s a dark, shadowy world in Sydney’s swimming enclosures and beneath the city’s jetties. Differences in shade, orientation and water flow are strong drivers of marine plant and animal life around these artificial habitats. Such places have proved beneficial for species such as seahorses, which thrive on swimming enclosure netting as it provides increased food availability and refuge from predation.

Deeper in Sydney Harbour, the waters around Clifton Gardens are home to striate anglerfish. Perfectly adapted to the area’s soft sediment and low-lying sponge habitat, this species has exquisite camouflage and uses its fins like feet to walk along the seafloor. It also has a built-in lure for attracting prey and a large mouth to eat it. Common Sydney octopuses also occur here, their distinctive white pupils and orange-rust-coloured arms emerging from lairs under rock ledges.

Sydney’s marine environment is exposed to most of the threats faced by coastal cities globally, including habitat loss, foreshore development, pollution, stormwater run-off and introduced pests. But some plant and animal inhabitants appear to not only be coping with the shortcomings, but are also finding their own strongholds.

The harbour, for example, is extensively modified, with more than half of the shoreline replaced by artificial structures such as seawalls, jetties and piers. Researchers are now starting to deploy prototype structures in Sydney Harbour to better connect the built environment with the natural environment. An example is designing seawalls with niches and crevices to increase colonisation by marine species such as seaweed, barnacles, limpets and crabs. The design of these environmentally friendly seawalls makes them more like natural rocky intertidal areas, with increased habitat complexity and a gradually sloping face to dissipate wave reflection.

Sydney’s estuarine habitats have historically been polluted by industry, particularly shipping, resulting in a legacy of residual toxins trapped in sediment, notably in low-energy sheltered bays with limited tidal turnover. Some impacts have been so severe they still need to be managed today, such as a fishing enclosure cordoned off in Homebush Bay to prevent people from catching and consuming fish from that area.

There are a number of shipwrecks still visible in Homebush Bay, including the wrecks of colliers Ayrfield and Mortlake Bank, the tug Heroic, the steel boom defence vessel HMAS Karangi and several barges, dredges and lighters. These wrecks are the remnants of Homebush Bay’s former use as a shipbreaking yard, and have become overgrown by thriving mangrove thickets. The wrecks can be viewed from the shore from Bennelong Parkway at Homebush Bay and Bicentennial Park. 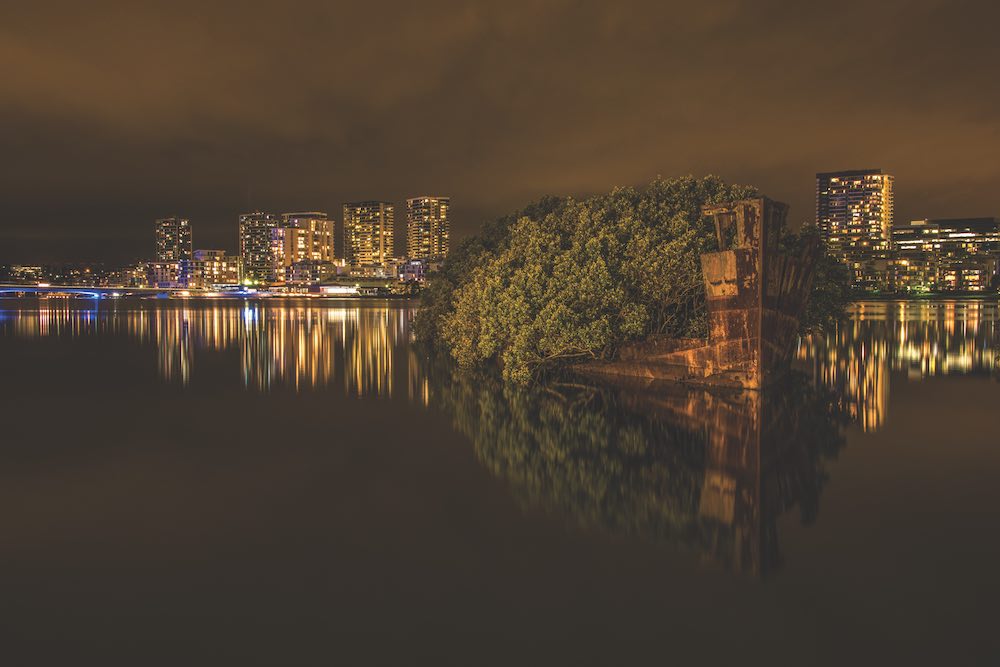 The collier Ayrfield is one of several wrecks still visible in Homebush Bay, which used to be a shipbreaking yard © Justin Gilligan, all rights reserved

The quality of Sydney’s waterways improved significantly in the early 1990s with the relocation of coastal sewage outfalls to deeper offshore water. But it didn’t come soon enough for some species. Researchers blame poorly treated sewage and stormwater for the disappearance of a brown seaweed, known as crayweed, from Sydney’s coastline. The species occurs in shallow water, grows to a height of 2.5 metres and forms dense beds of spindly lime-and-yellow-coloured fronds. Historic photographs, herbarium records and early research observations suggest the species formed underwater forests between Palm Beach and Cronulla during the 1960s and ’70s.

Since 2011, a collaboration of researchers, students and community dive groups, known as ‘Operation Crayweed’, has been working to restore this remarkable underwater habitat to Sydney’s coastal waters. As a first step, Operation Crayweed began investigating the species’ importance as an ecological community. In areas of New South Wales further south, the team documented that up to 10 times more abalone was associated with crayweed, compared with other species of seaweed, and that crayweed also supports a unique community of invertebrates, whose absence is likely to have flow-on effects to other species in the ecosystem. The team’s findings were supported by evidence from Victoria that greater numbers of rock lobster are associated with crayweed than with other seaweeds. Recognising the importance of this marine plant, the team is now working to restore it along Sydney’s coastline. 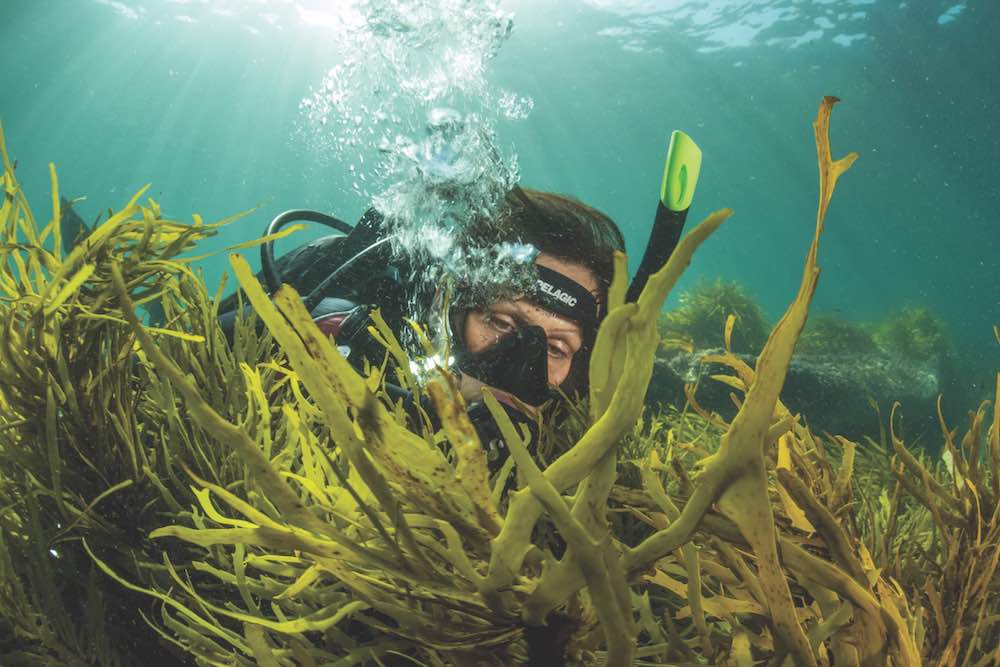 It’s a testament to the health of Sydney’s waterways that they are home to the last mainland colony of little penguins in New South Wales. Its existence, in Sydney’s North Harbour near Manly, was kept a local secret for decades during the 20th century. As many as 70 penguin pairs arrive here between May and February to breed. It is one of more than 10 sites in the state where the species breeds, along with Lion Island in Pittwater.

Yet, according to staff of the Taronga Wildlife Hospital and Pest Control, debris has been identified as a major threat to the marine wildlife that end up in the hospital’s care, which includes penguins. They also regularly receive marine turtles that have swallowed plastics and shorebirds that have swallowed fishing hooks or have them embedded in their body or wings.

The team has documented plastics inside the intestines of turtles, such as plastic shopping bags – both single-use and biodegradable bags – and small plastics such as lids, ring-pulls and bait bags, as well as balloons and balloon string. These days, there are more plastics in the harbour, and with more humans come greater amounts of marine debris. 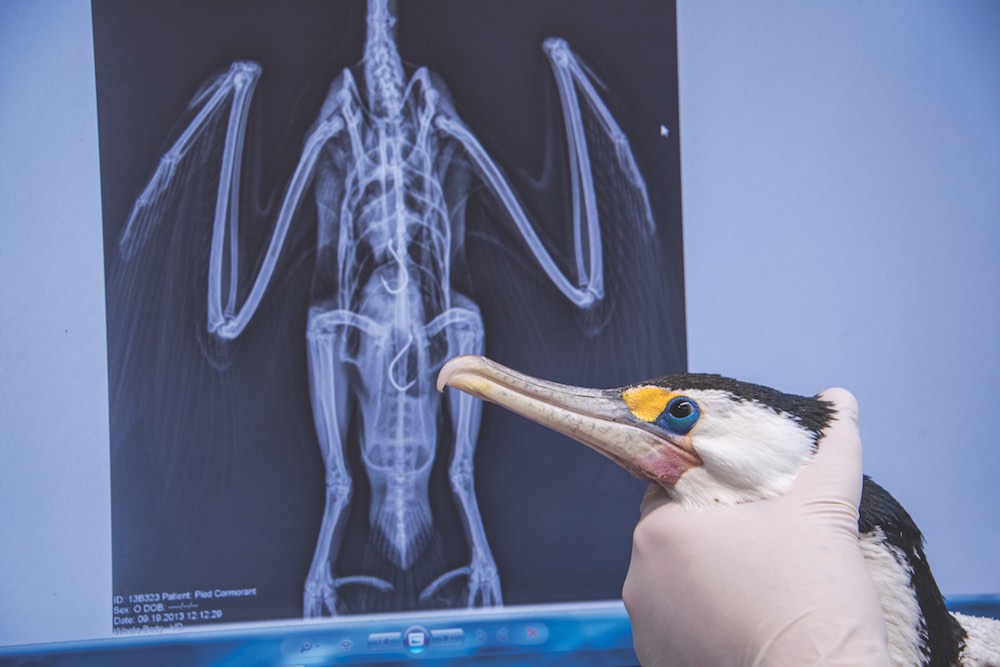 If the marine turtles that come to the wildlife hospital can be rehabilitated to the point of release, they are fitted with a satellite tag to monitor their survival and movement. Specifically, this technology is used to collect information on their migratory paths and determine habitat usage. Marine turtles are considered indicators of marine debris pollution and can be monitored fairly easily. Therefore, the team is working to identify vital feeding grounds and resting areas for these threatened species – information that can later be used to protect important habitats.

Marine turtles don’t return to their nesting beaches in tropical waters until they are more than 30 years old. The hospital’s tagging work has shown where and how these young turtles around Sydney spend their time before reaching maturity. Surprisingly, the turtles head into Pittwater and up the Hawkesbury River, which researchers now know are important feeding and resting areas for these animals.

Community groups around Sydney have recognised the significance of the marine debris issue and have passionately taken action into their own hands. ‘Operation Straw’ is one such volunteer-based citizen science project that collects plastic straws from Manly Cove, a popular dive site and hotspot for marine debris. The initiative was born when Harriet Spark began noticing discarded straws and plastics building up at her local dive site. Harriet finds that straws are the perfect starting point to convey the importance of reducing single-use plastics. She believes we can live without straws and other single-use plastics, and she has a strong belief in a future healthy marine environment for Sydney’s waterways.

In Harriet’s own backyard, the Cabbage Tree Bay Aquatic Reserve shows what can be achieved through protection and community support. Although there are many other places around Sydney that have marine debris issues, we can all play our part by making informed decisions as consumers. As a community we can do more to protect these beautiful areas by ensuring that we respect our often-overlooked underwater neighbours.

About the author: Justin Gilligan is a freelance photojournalist with an honours degree in marine science. He has worked on numerous projects with Australia’s Commonwealth and State Fisheries Agencies. Several of Justin’s images have also received international acclaim in prestigious international photography competitions; he is a finalist in Wildlife Photographer of the Year 55.

This article originally appeared in Signals 131. 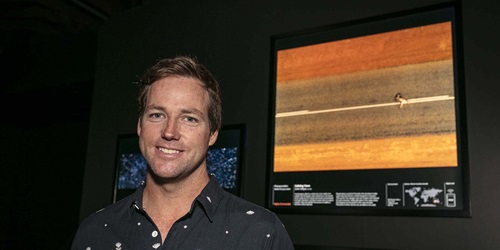 View all posts by Guest→
Posted in: Oceanography