As a photojournalist and marine scientist, Justin Gilligan has a passion for all things nature-related. Combining his creativity and scientific background, Justin's impressive photographs draw our attention to the beauty of the natural world, but also the issues that lie within it.

As a finalist in the 55th Wildlife Photographer of the Year competition, we caught up with Justin to find out where his love for the ocean and photography began, and what it means to have his work selected and displayed in one of the world's most prestigious photography competitions.

When did your love for photography and the ocean start?

So I think my love for the ocean started from quite an early age, maybe around the age of 12 or so reading magazines such as National Geographic and Australian Geographic. And then when I was 14, I pestered my parents enough to shout me an open water dive ticket, and from there everything changed, I got a camera shortly after that and then that love for photography just really blossomed, along with the love of the ocean.

So they just went hand-in-hand and that's just part of my everyday life now, which I'm very fortunate to have.

Can you remember what your first photographs were of?

So I learnt to dive in Port Stephens which isn't too far away from Sydney, the water's quite murky, so it wasn't like a crystal clear coral reef that I got to photograph, it was like a murky temperate sea – you could barely see a couple metres.

And I remember just being totally intrigued by an amazing living veneer of invertebrate growth, and so I learnt to dive in fairly average conditions taking photos of small creatures. And just trying to take photographs that represented those creatures, not just record shots, it was more about documenting the personality, the behaviour and the habitat of those species.

As a marine scientist and photojournalist that specialises in underwater photography, what changes have you observed in our oceans, particularly around Australia?

I've been fortunate to dive in much of Australia's waters, and I've seen a lot of changes – both good and bad. In Tasmania I was lucky enough to dive in some thriving giant kelp forests, which are huge forests – they're like 30 metres from the sea floor up to the surface and they form a canopy – and it's just like swimming through this amazing forest of swaying beanstalks.

So five years later I returned to that site and there was barely any to be found. So we've lost 90 per cent of our giant kelp forests which is a crazy thing to think about.

On the flip side here in Sydney, sewerage used to get released right along the coast and that had a number of impacts, again on the kelp and the invertebrates and marine species. Now that sewerage is being treated more appropriately and released further offshore, the coastal waters here in Sydney have actually improved in health so it's great to see that.

It's also really good to see the work of lots of different NGOs, marine scientists and even local councils doing their bit to try and improve different threats on the waterways around the coast as well. So while there are a lot of negatives, there are also positive stories to be told as well. 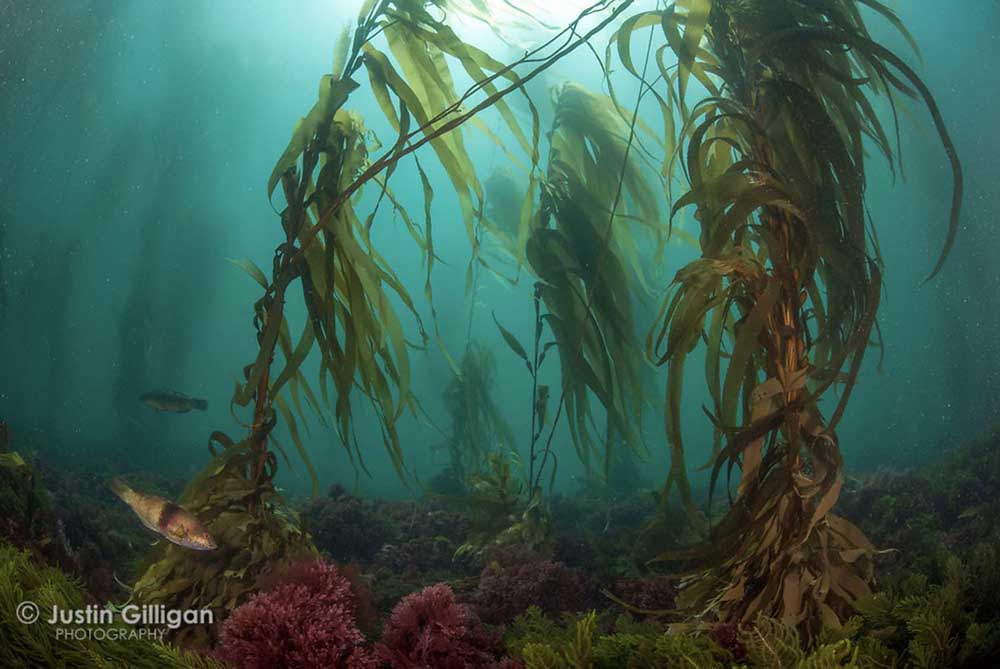 What has been your career highlight so far?

Being recognised four times in the Wildlife Photographer of the Year competition. It's the most prestigious competition in the world and the best way to get your images and your stories out there to a broad audience.

Are you inspired by other nature photographers?

I think I would have to say Thomas Peschak who works for the National Geographic magazine full time. I've been fortunate enough to assist him on a couple of assignments, and getting feedback from him and having him as a peer, really means a lot. I find his work really inspiring and just the level of time and passion he puts into it is something I can aspire to.

What's the funnest thing about your job?

As an underwater photographer, it's just great fun to be able to get in the water and have a look around and see things that people don't normally see – I'm really fortunate to have that opportunity.

What role do you think nature photographers have in raising environmental awareness?

I think as nature photographers, we really have an important role in raising awareness. Quite often we're in places that people don't usually get to see, so we're really photojournalists. As amateur photographers we're not aware of it, but we're in places taking photos that might have the potential to tell a story.

We could be documenting a beautiful natural ecosystem that could potentially one day be affected by fires, or be logged or it could change due to climate change. So even though as nature photographers we might not be aware that we're journalists, we are documenting the natural world and we have the ability to tell the story of a place and of creatures that a lot of people don't know about.

Do you have any advice for young or aspiring nature photographers?

The main thing is to just choose a subject in your own backyard. There's just so many things out there, so choose a field that interests you near your house so you can just really get into that subject and try and photograph it during the day and in the evening so you can learn and hone your photography skills, and also learn about the behaviour of the creatures and the environment that you're photographing. So just having that easy access near where you live is critical to improving your skills as a nature photographer.

Encounter the stunning diversity of life on Earth in our Wildlife Photographer of the Year online exhibition. Take a curator-led tour of the exhibition highlights, go wild with kids activities and craft and shop the exhibition through our store.

View all posts by Laura Signorelli→
Posted in: Wildlife Photographer of the Year , Arts and Culture