The PS Herald shipwreck site lies a short distance off North Head at the entrance to Sydney Harbour. Remnants of the small side-wheel paddle steamer, which sank in April 1884, are located at a depth of 26 metres, and comprise one of the oldest surviving vessels of this kind in Australia.

Herald’s wreck site has been the subject of maritime archaeological surveys conducted by a collaborative team of researchers from the Australian National Maritime Museum and non-profit Silentworld Foundation. Photogrammetric 3D reconstruction surveys performed in conjunction with the overall archaeological project has enabled the team to develop 3D digital models of Herald. While these models are incredibly useful from an archaeological perspective, the team also wondered whether they could be adapted in such a way that Herald’s wreck site and history could be shared with a much larger audience. An opportunity to do just that arose when Dr James Hunter, the museum’s Curator of RAN Maritime Archaeology, was introduced to our teacher, Professor Holger Deuter, an expert in virtual design at Germany’s University of Applied Sciences Kaiserslautern.

Prof Deuter and Dr Hunter both wished to create an exciting and educational virtual reality platform that would tell Herald’s story while also enabling the user to participate in a virtual ‘dive’ on the shipwreck. Under Prof Deuter’s direction, seven masters students – Niklas Blume, Lisa Lauer, Philipp Ledulé, Manuel Peris, Dimitri Saenko, Oliver Stock and Alina Wingert – were tasked with creating a virtual reality (VR) experience for Herald as a semester research project. All of us had undertaken Virtual Design studies at the university while pursuing our bachelor’s degree, and this provided us with a strong knowledge of digital design and technical aspects that greatly benefited this project. It also provided us an opportunity to share our respective skills and create something truly unique that crossed categories and disciplines. One particularly special characteristic of the project is that it permits practically anyone to virtually see and experience the same as the archaeological team when they dive Herald.

Background research is the critical first step of any history- and archaeology-based project. In the case of the Herald VR Experience, the student team liaised as much as possible with our Australian colleagues and spent considerable time learning about the paddle steamer’s history, and details of its wreck site. Early on, we faced challenges with the overall concept: How would we develop something visually appealing that was also exciting and conveyed all relevant information about Herald in a short span of time? Through an exchange of emails and phone calls, as well as several online meetings, we exchanged information and ideas with the Australian team, which kindly supplied digital still and video imagery of the wreck site, as well as 3D photogrammetric models, and archival information that detailed Herald’s unique history. Many of these elements –such as photos of a lifesaving medal awarded to the paddle steamer’s owner, George Hall, Sr., for rescuing people from Sydney Harbour – were converted into digital assets and integrated into the VR experience.

Although we made a concerted effort to maintain contact with our Australian colleagues as much as possible, distance and differences in time often led to delays and correction rounds as the project progressed. Many of the VR experience’s digital assets were built first in a simplified version and then continuously improved. In some cases, assets were discarded entirely and ‘reinvented’ until everyone was happy with the final result. 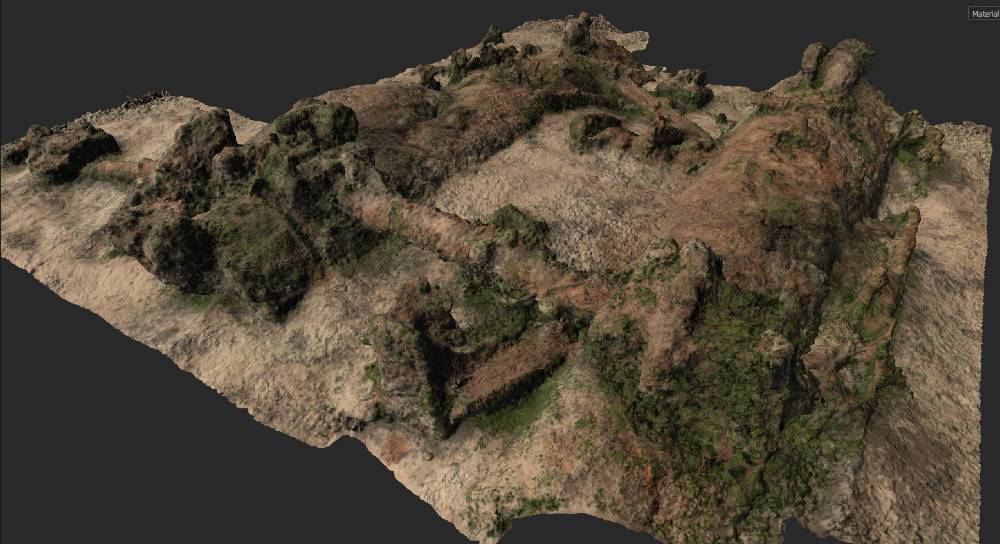 Screen capture of the Herald wreck site 3D model that forms the basis of the VR Experience. The 3D model was adapted from a photogrammetric 3D model of Herald produced by a team of maritime archaeologists from the museum and Silentworld Foundation. Image: Holger Deuter/University of Applied Sciences, Kaiserslautern.

... but well worth the time and effort!

We used images, underwater footage, and photogrammetric data collected from Herald to generate a 3D model of the wreck site in virtual space. The Australian team also supplied information about the wreck’s flora and fauna, and details of its surrounding seabed. Different digital programs enabled us to recreate seafloor terrain, plants, sea life, and other objects and special items relevant to Herald to tell its story. Based on one surviving archival photograph (no plans or other historical images of the vessel are known to exist) and historical information about other mid-nineteenth century side-wheel paddle steamers, we reconstructed Herald as a wireframe 3D model. This can be viewed within the VR experience and provides a visual reference to which the wreck site and its visible features (such as the boilers and engine) can be compared and placed in context. By putting all the different objects together in a virtual world, we gradually created a comprehensive VR environment with many captivating facets.

The wireframe model of PS Herald that is used in the VR Experience. Image: Holger Deuter/University of Applied Sciences, Kaiserslautern

The journey starts on the water’s surface, with a panoramic view of the entrance to Sydney Harbour and nearby shorelines of North and South Head. The ‘diver’ begins the experience by descending a buoy line into the depths. On the way down, Herald’s story is presented through brief narration and 3D models of relevant historical objects. Eventually, the ‘diver’ reaches the seabed and can explore the wreck site and wireframe model of the original vessel. Specific features on the wreck site turn blue when illuminated with a virtual flashlight, and are simultaneously highlighted on the wireframe model (to show their original context within the paddle steamer’s hull). Brief audio clips can also be selected that explain specific wreck features and what they tell us about Herald’s loss and formation as an archaeological site.

In the end, our hard work paid off. All of the digital components were assembled, the application tested, and the final product viewed it in its entirety in a 360-degree virtual environment. During a visit to Australia in February of this year, Prof Deuter presented the completed VR experience to the Australian team. All who used it were astounded with the results, and Dr Hunter expressed his desire that it be incorporated into a future exhibition at the Australian National Maritime Museum. We were extremely happy to hear the positive feedback, and excited at the prospect that our student project will be showcased on another continent!

Who can enjoy the experience?

The Herald VR Experience provides a unique opportunity for people to enjoy and appreciate one of Australia’s earliest paddle steamer shipwrecks in an engaging and exciting way. It is ideal for non-divers, children, and others who may not be able to access the actual wreck site. Currently, efforts are underway to develop a maritime archaeology exhibition space at the Australian National Maritime Museum, and this is a logical venue for the Herald VR. It could also be integrated into future museum exhibition and interpretive spaces related to the history of Sydney Harbour.

Given the current COVID-19 crisis, questions regarding museum visitation are particularly relevant, and the development of exhibition and interpretive platforms that can be experienced remotely is timely. Many museums have been offering virtual heritage tours for quite some time, and the Herald VR Experience could be adapted for this use. Currently, our project excludes people who do not possess VR glasses, but emerging technologies will no doubt create a scenario in the not-too-distant future in which Herald can be visited and appreciated from the comfort of one’s own home.

A German language version of this blog by the same authors can be viewed on the website of the University of Applied Sciences, Kaiserlautern.

Header image caption: Screenshot from the Herald VR Experience, showing a wireframe of the vessel as it likely appeared when still afloat. Image: Holger Deuter/University of Applied Sciences, Kaiserslautern

View all posts by ANMM Guest→
Posted in: Maritime Archaeology
↑