Since colonial times, pilots have guided vessels safely into and out of ports throughout New South Wales. Curator of Ocean Science and Technology Emily Jateff looks into the work of the Port Authority of New South Wales and its highly trained pilots.

From the earliest days of the Port Jackson settlement, Watson’s Bay, just inside Sydney Heads, was the home of Sydney’s marine pilots. By 1809, Robert Watson, the ex-quartermaster of First Fleet flagship HMS Sirius, assisted vessels with harbour navigation. Watson’s role was formalised by 1811. Pilotage was initially a private enterprise between local marine pilots and incoming vessels, but by 1833, pilots were required for safe harbour entry and exit on all ships.

On 20 August 1857, 121 people died when the Dunbar went aground just outside Sydney Heads in heavy rain. The public outcry over the horrific event led to the establishment of Sydney’s first permanent pilot station. Early pilot boats were whatever was at hand; whaling boats were the most common. Thetis (built 1868) became the colony’s first dedicated pilot steamer in 1875, when the government took full control of the service. 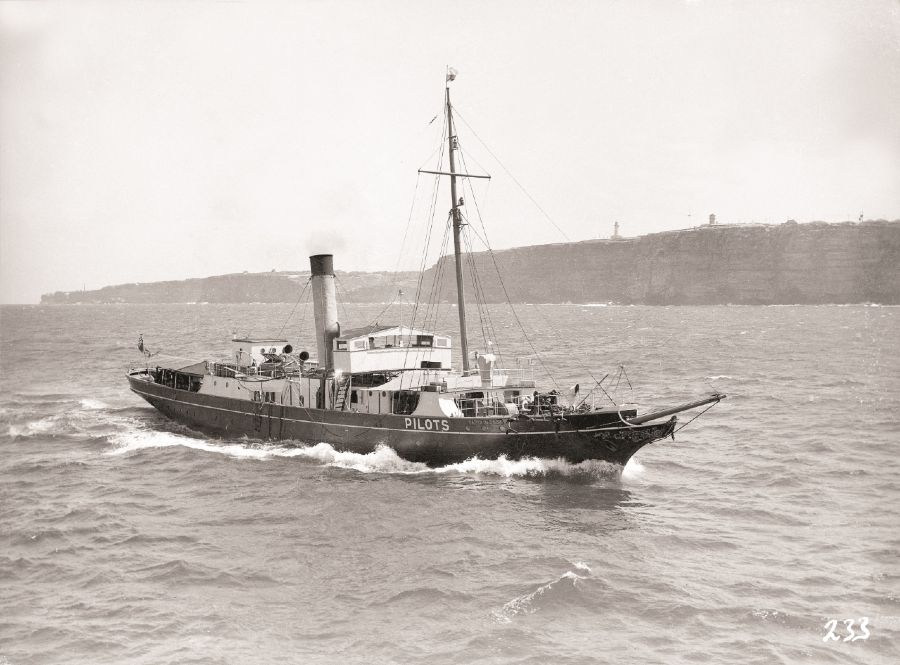 The second pilot steamer Captain Cook (II) was designed by W D Cruikshank and built at Mort’s Dock & Engineering Company in 1892. Used as a naval training ship during World War II, it was scuttled off Sydney in October 1947. Photographed c 1920 by William James Hall. ANMM Collection ANMS1092[015], gift from Mr and Mrs Glassford

In 1898, the first of three pilot vessels christened Captain Cook (built 1875) guided just 47 vessels into port in the month of February. More than 100 years later, Sydney marine pilots guide an average of 12 vessels to safe harbour per day.

Modern marine pilots ensure safe navigation into Sydney Harbour via either the Eastern Channel or Western Channel. Commercial vessels can be both hard to manoeuvre and slow to stop, so safe navigation is paramount to preserve life, port infrastructure and the environment.

Pilots oversee container ships going to Port Botany in Sydney’s south, which specialises in bulk liquid imports like petroleum; commercial ships to Port Kembla near Wollongong, which handles increasing motor vehicle imports and grain exports; and bulk carriers to Newcastle Harbour for coal export. Pilots also bring in cruise ships to the Overseas Passenger Terminal at Circular Quay and the White Bay Cruise Terminal at Rozelle, and to Newcastle, Port Kembla and Eden, on the New South Wales south coast.

Marine pilots use detailed local knowledge of depths, currents and tides to guide shipping through the channels of ports and harbours. After boarding from a cutter four nautical miles from port, they advise the captain of their approach plan and take navigational control until the vessel is safely berthed, although the captain maintains overall command.

Boarding at sea is usually via a ladder thrown over the side – which tests the pilot’s physical endurance in windy and wet conditions. In The Pilot Service of Port Jackson (1902), by John Arthur Barry (available via Project Gutenberg Australia), the author takes a day trip on pilot steamer Captain Cook. One of the passengers remarks on the beautiful day and easy sailing, to which the skipper responds:

But what about the pitch-dark nights, with a SE gale, blowing big guns, rain driving in thick squalls, and a scared foreigner burning blue lights and sending up rockets for a pilot off Botany, and not knowing where he is any more than the man in the moon. You should come out with us at a time like that to see what piloting really is! ... No, it’s not all beer and skittles!

Sometimes the weather is fresh enough that pilotage is suspended. At Newcastle it is a different story, however, as most ships entering the harbour are coal and grain ships that have enough deck space to allow pilots to board by helicopter.

Marine pilots are skilled and experienced Master Mariners. Training to be a marine pilot includes successfully completing a series of simulations in a training facility on a replica ship’s bridge complete with control panels and communication equipment. After completion of training, pilots are usually required to have two or more years of piloting experience before taking navigational control of the larger bulk container and cruise ships.

The museum will open its new glass-fronted Harbourside Observatory and Ben Lexcen Terrace waterfront venue later this year. There visitors will be able to sit and relax while surrounded by the sights, sounds and stories of Sydney’s busy working life above and below the harbour’s waters.

Details on modern marine harbour pilots were provided by The Port Authority of New South Wales, which is generously supporting the Harbourside Observatory.

A pilot steamer for the collection, by Michelle Linder (2015)

View all posts by Emily Jateff→
Posted in: Vessels
↑