Last Friday Sydney’s VIVID festival of light, music and ideas was supposed to enjoy a spectacular launch. The 2020 festival would have been the twelfth since Brian Eno first lit up the Sydney Opera House in 2009. Last year it attracted over two million visitors and injected over $140m into the NSW cultural economy. The Australian National Maritime Museum first participated in 2013, and every year our roof has featured a commissioned video projection.

This year the Maritime Museum was due to feature Ample Projects’ the strange big canoe to mark 250 years since Cook’s charting of the east coast of Australia. This can now be viewed online instead of on our roof. Both the Maritime Museum and Museum of Contemporary Art (MCA) have been regular VIVID exhibitors and I believe that our participation has not only increased audiences for both institutions as a consequence, but has also significantly amplified our relevance and in turn our importance to the city’s cultural fabric. 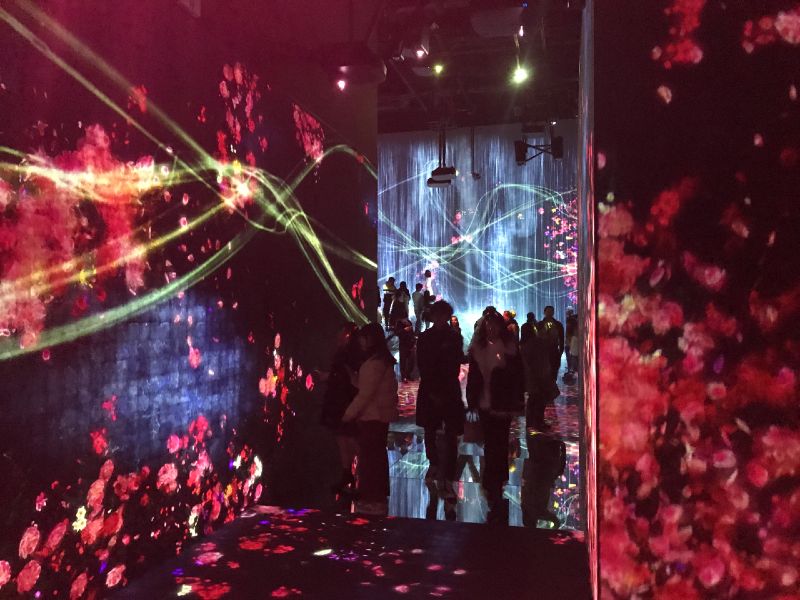 Endless (by teamLab) - If you remain perfectly still, an infinite number of blossoms and flowers gently settle on your body. Any abrupt movement of you torso or arms and the flowers immediately begin to wither and decay

The cancellation of this year’s VIVID festival illustrates the enormous impact the pandemic has had on the city’s festival calendar, and also highlights the loss of public artwork opportunities, especially for digital artists. Each winter Sydney’s skyline and streets have been transformed into bustling promenades by projections, interactive installations and multimedia events produced by both Australian and international digital artists. Not surprisingly, some of the most compelling works have come from East Asia and in particular Japan. Indeed, my favourite VIVID installation is Masakazu Shirane’s origami light kaleidoscope from 2015. This Japanese influence is no accident; while VIVID is just over a decade old, its Japanese precursors are hundreds of years old. The very first light festivals appeared in the mid-14th century in Yamaguchi prefecture in southwestern Japan. Here lanterns (chochin) are still used to illuminate homes and streets in the summer celebration known as Obon, in which ancestral spirits are ceremonially welcomed home. Such festivals are still found across Japan and this passion for light and ceremony has energised Japanese artists for generations. 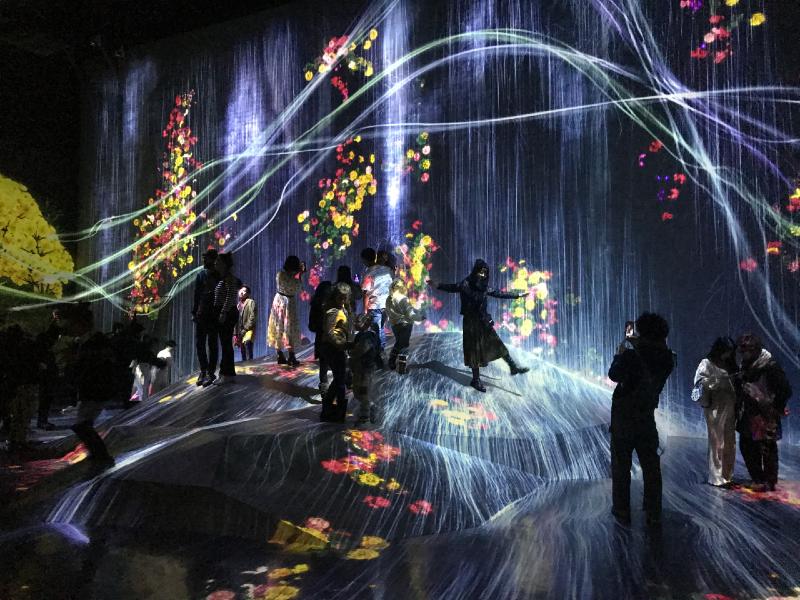 Transcending Boundaries (by teamLab) - Electric waterfalls pour down the walls and over artificial boulders; then as they encounter individual visitors they deviate and meander, creating the illusion that the “flow” has been trapped and redirected to create beautiful eddies all around you

Back in February I visited Japan to see some of the most influential emerging digital artists at the new Digital Art Museum (DAM) created by the ground-breaking art technology co-operative teamLab. For someone deeply interested in museums, the opportunity to visit teamLab’s Mori building, situated on an artificial island in the middle of Tokyo Bay, was a rare opportunity. And here I was given a fascinating glimpse not only into the future of digital art, but also a possible future for museums.

teamLab was founded in 2001 and is an interdisciplinary creative group that brings together professionals from various fields, including artists, programmers, engineers, CG animators, mathematicians and architects. They collaborate to create unique artworks that strive to blend art, science and technology. Based in Tokyo, teamLab has exhibited major digital artworks in cities all around the world, from Singapore and Shanghai through to Macau, Paris and Sydney, where their flowers and people installation was exhibited at the Art Gallery of New South Wales. But teamLab’s most recent experiment, opened in 2018, is known as the Digital Art Museum, or DAM. With the support of a scholarship from the Japanese Ministry of Foreign Affairs, I visited DAM on a chilly February morning in 2020, just three weeks before it, too, was temporarily closed as Tokyo locked down. 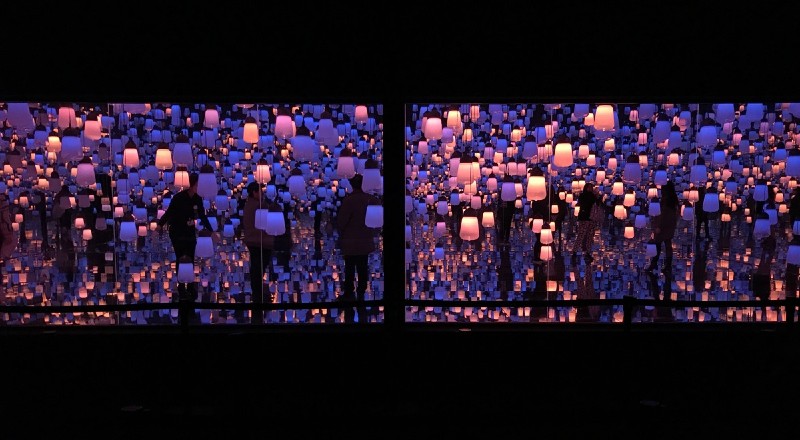 Forest of resonating lamps (by teamLab) - The close-up interactivity of a one on one interaction with a Cochin (lantern) contrasts with the crowd experience created when you stand back and witness the mass of colour, vibrancy and pulsating crowds

DAM is a 10,000-square-metre son et lumiere powered by over 500 computers, projecting floor-to-ceiling imagery via 470 high-definition projectors. To visit DAM is to bathe in the light and creativity of 50 borderless artworks that both mesmerise and delight. The teamLab collective of ultra-technologists has carefully curated this suite of artworks to meld one room into another, forming a blended set of experiences that bonds visitor, artwork and building into a seamless single journey. In one work, Endless, you enter a darkened room where your presence triggers a series of blossoms and petals to sweep over then settle on your torso. If you remain still, more flowers settle, before finally decaying and fading away. In another work, Forest of resonating lamps, a forest of suspended cochin react to your presence. When you enter the dimly lit, cavernous room and stand beneath one of these cochin, it begins to emit a pulse of light that intensifies the closer you get. Slowly this radiates out to surrounding cochin and a rhythmic pulse of light emanates from every visitor’s locale. For museums, the visitor awareness technology of Forest opens up exciting possibilities of customisable galleries, with sound and light effects that could both sense and react to the presence and concentration of individuals and groups. If carefully choreographed, this technology could ultimately better reward the curiosity and tenacity of our visitors by unmasking little ‘Easter eggs’ of hidden artefacts and storylines. 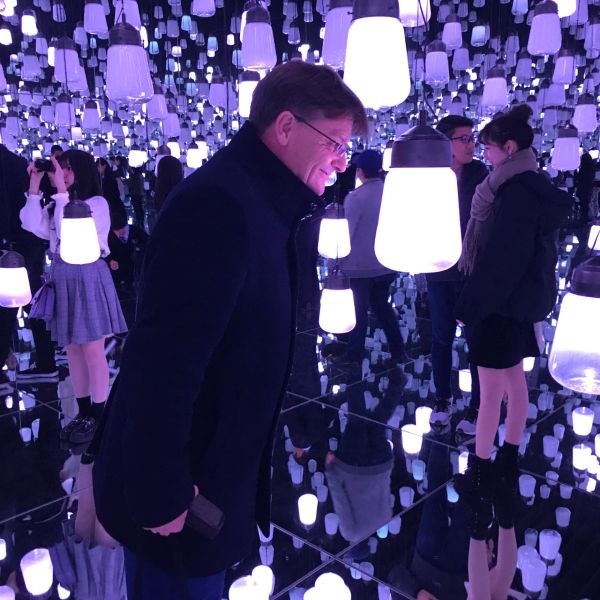 Forest of resonating lamps (by teamLab) - As I close in on a Cochin (lantern) they glow brighter and radiate out to light up adjoining Cochin. As these types of spatial objects are programmed to be 'aware' of your physical presence, I could see this type of technology put to work in museums like ours to help focus museum visitor’s attention and guide them off on other pathways through our galleries

Ultimately, this visit to DAM stood out from the countless museums and galleries I have enjoyed in my 25-year career, as it was a sneaky peak and, I have to admit, a rude awakening of what a new museology might look like for generation Z. Museology is the study of the way museums and their collections are organised and managed. Typically these have been physical collections arranged by curators in specially designed galleries all focused to support the informal learning of our visitors. What teamLab have achieved in their Mori building is to both further challenge the primacy of physical collections and the necessity for regimented and partitioned galleries and architecture. However, I believe teamLab’s most salient artworks – those that pointed to the real revolution for museums – were those they had designed especially for young children. In the artwork Sketch Town, children were encouraged to use crayons to draw familiar objects from a city – cars, planes, homes, streets, pedestrians. With a scanner, children then set about digitising their drawings and releasing them into a digital cityscape. Within this cityscape children interacted with their own work through touch screens and motion sensors. Finally, when they grew bored of all this interaction, they were encouraged to print out their original sketches – but this time they emerged from the printer with instructions to transform their digitised 2D sketch into a 3D sculpture!

In Sketch Town we can see the future for museums as experience emporiums, purposefully fusing the physical and virtual to produce an enthralling mix of media, memory and multi-dimensionality. In this way DAM is truly a borderless museum, as it challenges the primacy of three-dimensional objects. Ultimately, it is the first museum I have encountered that truly delivers on William Gibson’s promise to conjure for generation Z a powerful and truly consensual hallucination of Cyberspace.

View all posts by Kevin Sumption PSM→
Posted in: Arts and Culture
↑