The museum’s ground-breaking five-year War and Peace in the Pacific 75 international learning program commemorates the 75th anniversary of World War II and promotes peace and reconciliation across the Pacific.

I was born on the 6th of August 2001, exactly 56 years after the first atomic bomb was dropped by an aircraft flying at 9,470 metres directly above us at 8.15 in the morning. I was born at exactly 11.28 am in the morning. I always have thought about what it was like here at 11.28 am that day, what would we see if we were here that fateful morning, what would we be feeling, what could we do?

When this unique opportunity came to me ... and I do think that it personally came to me for a reason ... I have to say that I had mixed emotions. First I am so thankful for the support of the Australian National Maritime Museum and this wonderful program that allows us to heal old wounds, all the while gently guiding us down the path of reconciliation between then and now, the young, the elder, the aware and the unaware.

These words are from a speech by Japanese high school student Rio Wada, at a Youth Friendship Ceremony in Hiroshima on 13 December 2019. Rio was the 2019 Japanese Youth Ambassador in the museum’s War and Peace in the Pacific 75 International Learning Program. Joining Rio on stage were her fellow Youth Ambassadors: Zack Lynch, representing Australia, and Charlie Conrad-Montgomery, representing the USA. They each made heartfelt speeches on their understanding of past conflicts, yet also established a profound connection to a hopeful and peaceful future. That is why they were there.

Students from local high schools, a cohort of visiting American students, an Australian teacher, a deputy director of the Hiroshima Peace Memorial Museum and a former Japanese Youth Ambassador rounded out the presentations. Students then swapped hand-written messages of hope with people they didn’t know. The talks covered serious ground, but the overriding sentiment of this informal conclusion to a formal ceremony was one of friendship and a non-scripted enthusiasm to share culture and discover more about each other. Language proved no barrier to fervour and the energetic engagement of youth gave the friendship ceremony a tangible context. Mission accomplished.

2019 was the third iteration of this spirited five-year program, which brings together high school students from Australia, the USA and Japan to research different aspects of World War II’s Pacific conflict. They conduct first-hand research and uncover little-known stories to create free educational resources. One Youth Ambassador from each country attends a week of diplomatic and cultural engagements, visiting historical sites, meeting survivors and working with local schools in a different country each year. The qualities we look for in our Youth Ambassadors are leadership, having something to say, cultural interest and a sense of adventure – a spark that will grow and illuminate as the program unfolds. Destination 2019 was Japan. 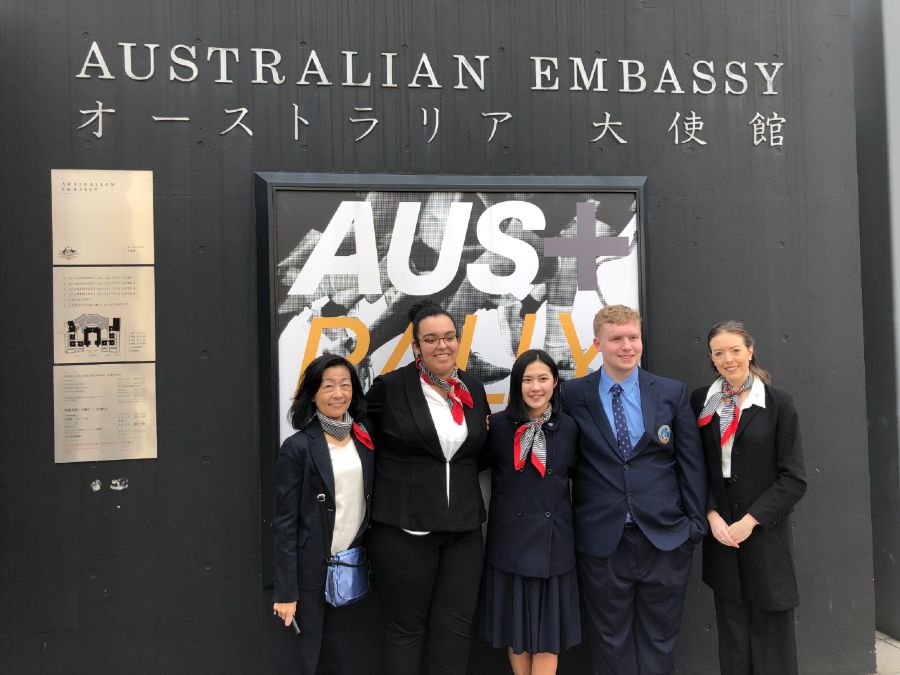 The project encourages active investigation, empathy and contestability to push the boundaries of current perspectives and it is, importantly, student-led. Consequently, they develop quite a personal connection to the stories and are understandably proud of their products. That is where learning starts. ‘Throughout this research project we will be able to gain valuable new insights on topics we never thought of pondering about before,’ noted a group from Amaroo School, Canberra, on their blog.

From there, making a connection to World War II that is relevant to their own lives surprises them, and they tend to embrace it. Two schools from the USA investigated a former ‘secret city’ in Tennessee called Oak Ridge. One team visited the nuclear reactor there and asked about its role in World War II, as Oak Ridge was instrumental in developing the atomic bombs dropped on Japan in 1945. Going back to Rio’s words, different perspectives on those events raise discussion and thought, relating both to the people involved and to current issues such as nuclear disarmament. 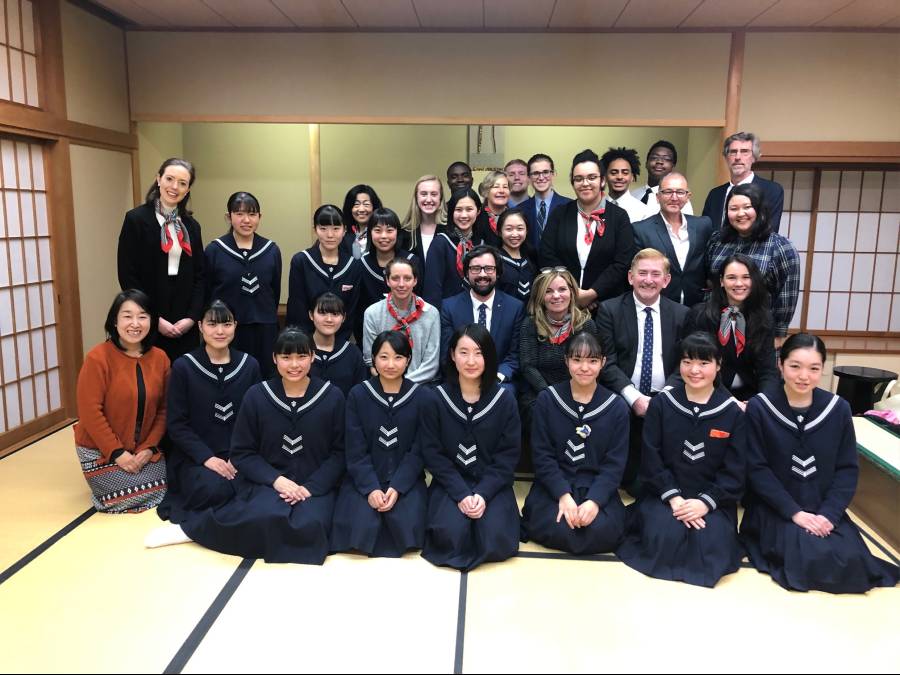 Jump forward several months and the same students are in Sendai, Japan, talking to an 85-year-old survivor of the American air raids of 1945. Just quietly, she announces to our teenagers that, although she has spoken of her experiences before, this is the first time she has talked to an American about the war, and how healing that was for her, even now. A few days later, they met a woman who, in August 1945, was eight years old and living in Hiroshima. The emphasis was on peace and how we can move forward, and she told the students they weren’t leaders of tomorrow, they were leaders of today. ‘You have leaders’ faces,’ she said, ‘and we are passing the baton of peace to your generation … Knowing is the first step in preventing a war.’ The significance of both moments was palpable.

In a Voice of America radio broadcast on 11 November 1951, Eleanor Roosevelt said, ‘It isn’t enough to talk about peace. One must believe in it. And it isn’t enough to believe in it. One must work at it.’ That is exactly what we all did during our time in Japan – sometimes consciously, sometimes organically and occasionally serendipitously. Of course, there were challenges, but there was a pervading sense of continual learning that made it a very happy and supportive time.

We visited four cities – Tokyo and Sendai, which were bombed in 1945; Hiroshima, the site of the first atomic bomb; and Kure, where Australian occupying forces set up headquarters in 1946. Joining the team were a special student film envoy, teacher chaperones, a group of enterprising students from Tennessee who paid their own way, translators, a Japanese student exchange representative plus staff from the museum and Education NSW.

Working with local high schools provided many special moments and encouraged the sharing of different outlooks. In Tokyo, we visited Jumonji High School, which was bombed in 1945, and examined material from their archives, before sharing lunch with present-day students. In Hiroshima, students from Jogakuin High School guided us through the Peace Park, explaining the city’s commitment to fostering peace. They gave informed and challenging presentations at the Youth Friendship Ceremony, as did the students from the Hiroshima International School, who ran a special workshop to make origami cranes as peace symbols. Hanging paper cranes in the Peace Park and ringing the United Nations Peace Bell together were significant experiences. At Sendai Shirayuri High School, we took part in a traditional tea ceremony and a Japanese calligraphy class. In a special Q&A forum, Ms Ikuko Nozawa, a 93-year-old former student and air-raid survivor, held us spellbound with her eloquence and passion for youth to understand the importance of peace. And, in something of a culture shock for the Australians and Americans, they discovered that in many Japanese schools, students and staff clean the entire school each afternoon!

In Kure, the effervescent students from the National College of Technology used their English skills to put together an amazing tour program that included a World War II bunker, history and maritime museums, a meeting with the mayor and their favourite places to eat. A lovely moment was recreating a photo from 1946 showing Australian occupying forces and Japanese communications operators on the steps of the naval base. There is a poignant sense of rebuilding evident in that photo, which captured the essence of why we were there so many years later. 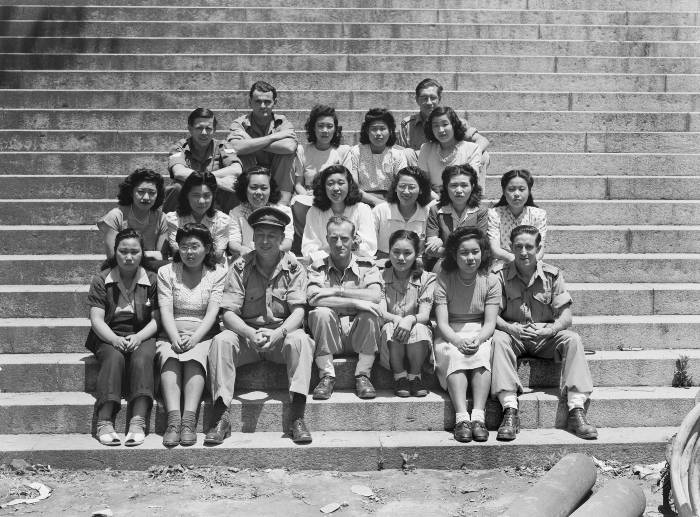 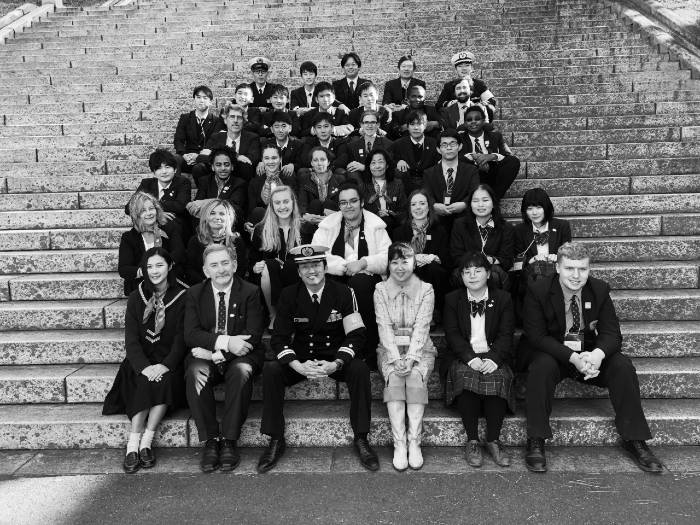 A 1946 photo showing Australian occupying forces and Japanese communication operators on the steps of the naval base at Kure (left) and the 2019 re-creation. 1946 image Australian War Memorial; 2019 image David Foley

A key component of this program is to promote youth advocacy and give students a chance to develop and refine their leadership skills. We gave them key responsibilities at formal events and created opportunities to meet with high-ranking officials. These included members of the Japanese Maritime Self Defence Force (JMSDF) in Kure, who kindly worked with the Kure students on the visit to the naval base then gave us an exciting tour of their vessel Osumi, including lunch in the mess hall.

Morning tea at the Australian Embassy in Tokyo was an exciting event and reminded the students that those already working internationally are interested in what they have to say. The Australian Ambassador to Japan, His Excellency the Hon Richard Court AC, and Embassy staff talked enthusiastically with the students on their participation in the program, future plans and how their three nations work cooperatively on many levels in today’s world.

At the Commonwealth War Graves Cemetery in Yokahama, the Youth Ambassadors held a wreath-laying ceremony with the Australian Defence Attaché to Japan, Col Simon Monterola. Australian Youth Ambassador Zach Lynch’s speech covered the relationship between honouring those who fell and the world we have today:

The soldiers who lost their lives continue to protect us in their own way, even from beyond the grave, because remembering the fallen allows us to honour them and use lessons that their sacrifice has taught us to help keep those who are alive safe from the threats that caused us to lose those soldiers in the first place.

At the United Nations Institute for Training and Research (UNITAR), just across from the Hiroshima Peace Park, we attended an inspiring session on the agency’s role in peace-building and training, and learned about the ‘Hiroshima Peace Trees’, which flowered again even after the devastation caused by the atomic bomb. People around the world plant seeds from the trees in their own countries as symbols of peace. We intend for our schools to participate in this program in 2020.

At the Youth Friendship Ceremony, Mr Katsunobu Hamaoka, the Deputy Director of the Hiroshima Peace Memorial Museum, challenged us to make the most of opportunities and keep learning once we return home: ‘In this museum we have prepared a menu that will enable everybody to return to their home towns and countries and continue to learn, so please take advantage of it.’ The Youth Ambassadors presented a quilt, which students from our project decorated with symbols of harmony and their nation to symbolise coming together in friendship. A second, similar quilt sits in the museum’s Education Collection. 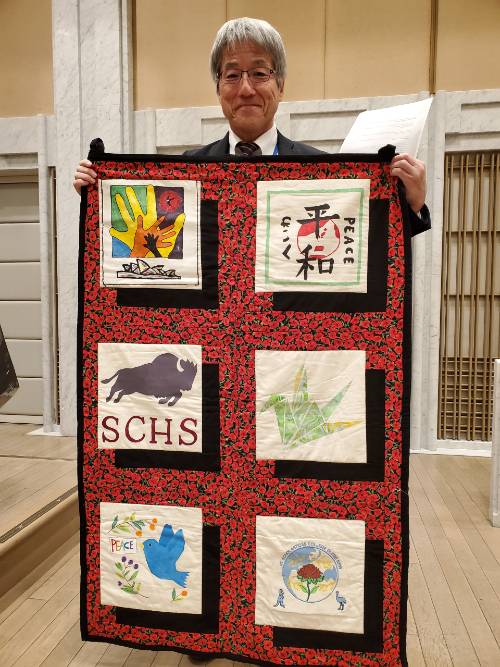 Deputy Director of the Hiroshima Peace Memorial Museum, Katsunobu Hamaoka, with a quilt made and donated by the students participating in the education program. Image David Foley

I have often wondered how this program seems to open doors to difficult and indeed painful territory in a way that supports and motivates people to share their experiences. I think the answer is twofold: firstly, it is about discussing past conflicts in the context of the preciousness of peace, and secondly, youth are at the forefront, which gives hope for the future.

Education officers work on a fascinating range of projects. Just a few times in a career, if you are lucky, a program comes along that changes everything. This is one of those moments.

* also took part in the programs in Japan
In 2020 students will explore ‘Peace, Revelation and Reconciliation’, produce works of art and meet in San Francisco. For more information on the War and Peace in the Pacific 75 program, visit our webpage.

Jeffrey is a Senior Education Officer at the Australian National Maritime Museum.

View all posts by Jeffrey Fletcher→
Posted in: Education
↑