Yesterday the museum hosted a small, private event to mark the first anniversary of the shootings in Christchurch, New Zealand, that killed 51 people at Al Noor Mosque and Linwood Islamic Centre.

On 15 March 2019, two consecutive terrorist shooting attacks targeting Muslims occurred during Friday prayer. The attacks killed 51 people and injured 49. The deceased (47 men and four women), were born in 18 different countries, including Afghanistan, Bangladesh, Egypt, Fiji, India, Indonesia, Jordan, New Zealand and Pakistan. Ranging from 3 to 70 years old, many of the victims had migrated to New Zealand to study or work, to build a better life for themselves and their families. 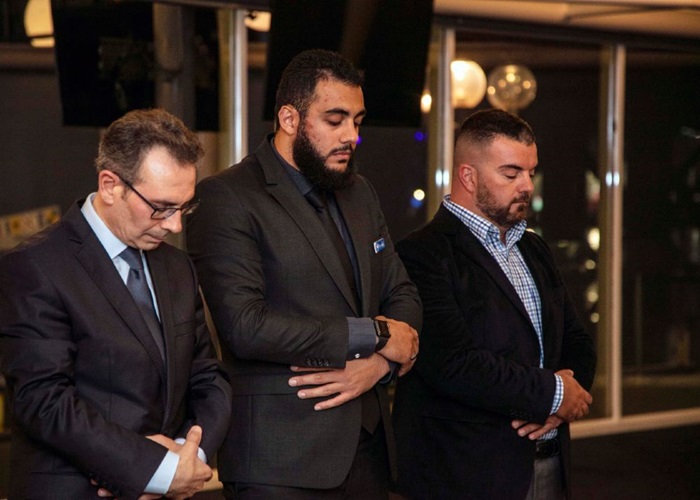 The purpose of the event was to:

The event was organised with the support of the Australian National Imams Council (ANIC) and the New Zealand Consul General in Sydney, and attended by representatives of the Muslim community, as well as the NSW Jewish Board of Deputies, SBS, the Race Discrimination Commissioner, the Department of Home Affairs, Multicultural NSW, Settlement Services International and the Affinity Intercultural Foundation. Museum staff of Muslim faith and their families were also invited. Our dear friends from the Islamic Museum of Australia and the Immigration Museum in Melbourne, as well as the Migration Museum in Adelaide joined us via What's App. 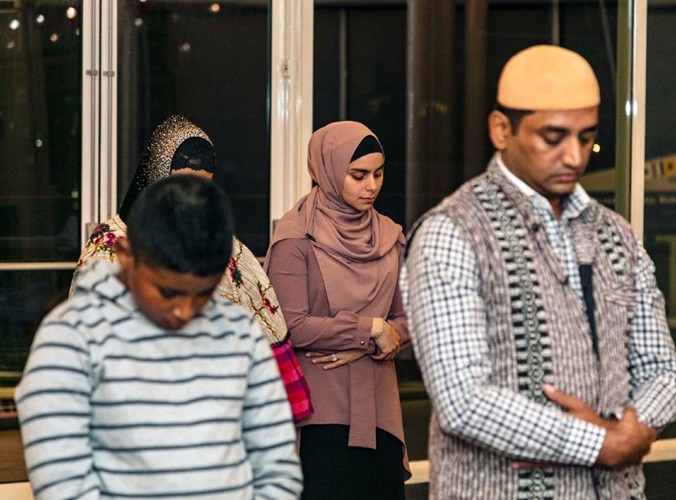 Imam Ibrahim Dadoun performed prayers for the deceased and read their names aloud. Mrs Ramia Abdo Sultan, Community Relations Advisor at ANIC, spoke about the need for sustained action to combat Islamophobia in Australia, while I followed with a few words on behalf of the museum. The New Zealand Consul General, Mr Bill Dobbie, spoke of his country's deep appreciation of Australian support in the aftermath of the attacks. During the prayers, the museum’s rooftop was illuminated with the New Zealand silver fern and an invitation to remember all those who died.

At the event’s conclusion, attendees discussed how their organisations responded to the attacks. The range of responses were diverse, but a stand-out was a powerful message of interfaith solidarity from the NSW Jewish Board of Deputies. Its CEO, Mr Vic Alhadeff, was the Jewish leader who initiated the crowdfunding campaign by the Jewish community for the families affected by the massacre. Mr Alhadeff flew to Christchurch to pay respects at both mosques and then presented a cheque for $70,000 to the mayor of Christchurch for the Christchurch Foundation which managed the funds. 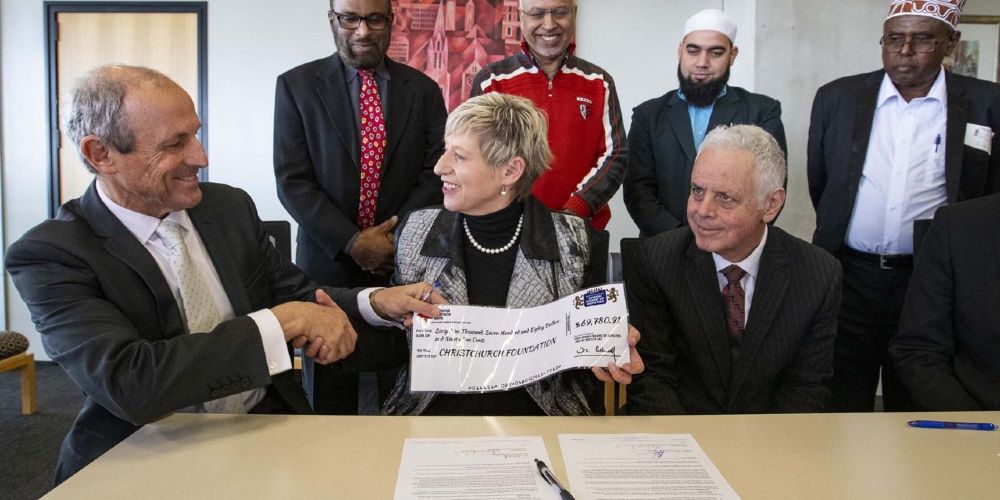 Vic Alhadeff, CEO of the NSW Jewish Board of Deputies presenting a donation to the mayor of Christchurch. A crowdfunding campaign among the Jewish community raised $70,000 for the families impacted by the massacre.

The museum is seeking to demonstrate its support for the Australian-Muslim community and its emphatic rejection of Islamophobia. The attacks in Christchurch have had a major impact on the museum’s work, causing us to reach out to the Muslim community and changing our practices to be more accessible and welcoming. With help, we’ve grown and improved, made many new friends and created opportunities for our visitors to learn about Australian–Muslim history, which predates Captain Cook. Regrettably, this would probably not have happened so quickly without Christchurch.

The museum has a statutory responsibility for collecting and sharing stories of migration to Australia. To do this effectively, we need to collect and share objects and stories which reflect the cultural diversity of our population. Three years ago our governing Council decided that we needed to enhance our efforts in the migration area, including building awareness of our work and strengthening relations with people from migrant backgrounds and diverse cultures and faiths. As a result, we started developing a broad and ambitious program of work, including building relationships with Australia’s migration and multicultural museums, including the Islamic Museum of Australia in Melbourne. 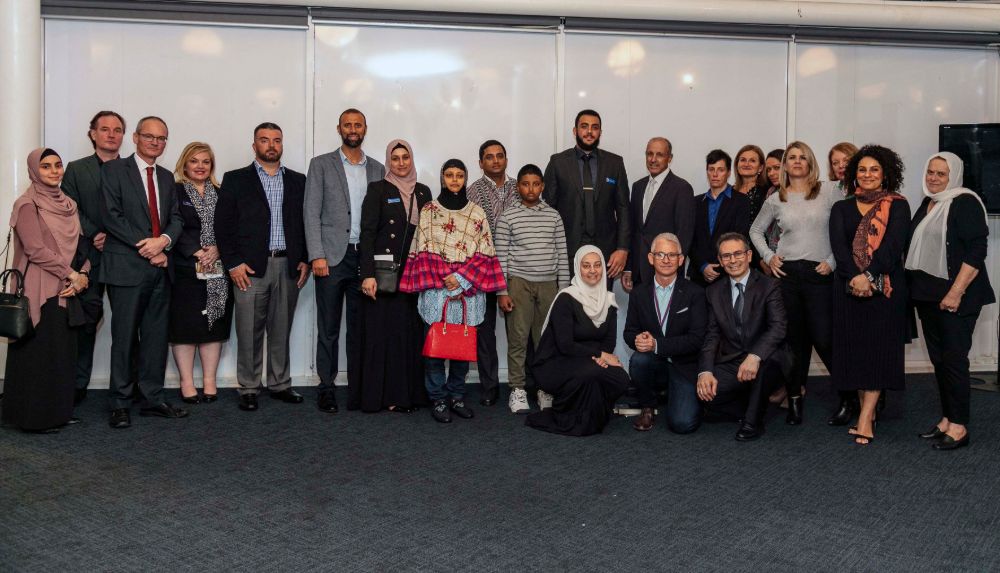 A year ago, I was at the Islamic Museum of Australia to discuss what museums could do – individually and together – to help combat Islamophobia. Two hours after this meeting, the attacks in Christchurch occurred.

The timing was uncanny, and the museum acted very quickly to convene a national meeting of Australia’s migration and multicultural museums. An alliance was formed which resulted in more than 50 actions to support social inclusion and community harmony to help combat Islamophobia.

Given there is good evidence that the public trusts museums, and that museums can contribute to social cohesion and community harmony, we are confident that telling stories about diverse populations not only provides a more rounded view of Australia, it also breaks down barriers and encourages conversation, reflection and understanding.

Some recent initiatives the museum has adopted to help combat Islamophobia include: 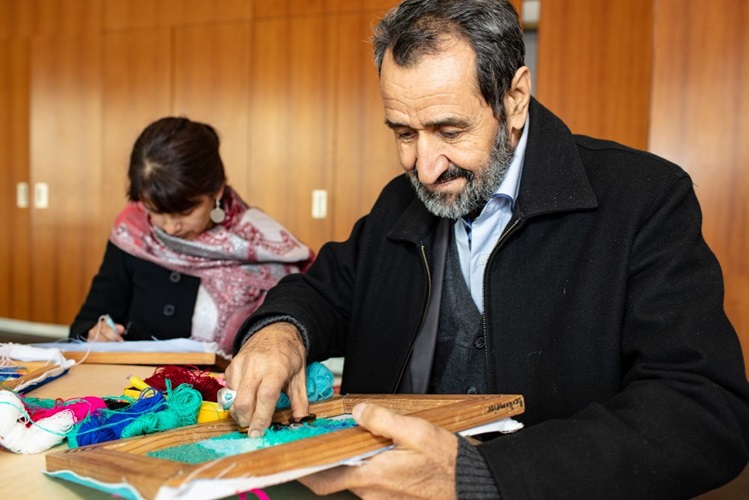 Artists Sayd Abdali (right) and Jane Théau worked to make a tapestry rug at the museum during Refugee Week whose design celebrates the new lives that refugees begin in Australia. Image Andrew Frolows

There is certainly more to do, but we have made a good start.

The museum hopes that through this event, the Australian-Muslim community recognises our museum as a safe place that they would like to visit and enjoy with their families and friends.

View all posts by Paul McCarthy→
Posted in: Events , Migration
↑