A sweet life made with love

Michel Nehme (born 1942) and Marie Nehme (née Ibrahim, born 1954) share a similar background. Both were raised in farming families with seven siblings and both were born in Zahlé, known as Lebanon’s ‘City of Wine and Poetry.’ Zahlé is located about 55 kilometres east of the capital Beirut, in a mountainous district that is renowned for blending the agricultural and the intellectual to produce a significant portion of Lebanon’s grapes, wine, arak and poetry. The area has also been a land of emigration since the 19th century, initially to the South American countries of Brazil, Argentina, Colombia and Venezuela, and then to the United States, Canada and Australia during the Lebanese Civil War (1975–1990).

In the late 1950s, Michel Nehme was working as a mechanic in Zahlé when he heard on the news that Australia was welcoming immigrants. With few job prospects in Lebanon, he regarded Australia as the best opportunity for a better future. Michel asked his sister Nadia, who was already living in Corrimal on the south coast of New South Wales, to sponsor him. In June 1965, the 23-year-old sailed from Beirut to Port Said, Egypt, where he embarked on the Flotta Lauro liner Roma for the four-week voyage to Australia.

Roma docked in Fremantle on 27 June 1965 and then continued to Sydney, arriving on 4 July. Michel headed to Wollongong, in the Illawarra region of New South Wales, where his brother-in-law Joseph helped him to apply for a position at BHP Steelworks in nearby Port Kembla. Michel worked in the steel industry for four years and eventually obtained a permanent residency visa.

In 1969 Michel visited his hometown of Zahlé for a holiday. There, at a party, he met Marie Ibrahim, who was a neighbour of his sister Josephine. Michel and Marie fell in love, married in October 1969 and moved to Australia just two months later. Marie left all of her family behind, while Michel already had two brothers and one sister living in Australia.

Newlyweds Michel and Marie Nehme share a kiss on the rooftop of Michel’s family home in Maalaka, Zahlé, Lebanon, 1969.


In December 1969, Michel and Marie departed from Beirut on a Japan Airlines flight bound for Sydney. The flight took more than 24 hours, with stops in Tehran, New Delhi, Bangkok, Hong Kong and Manila, before landing in Sydney on a hot summer’s morning.

Michel had already purchased a house close to the beach in Corrimal, in the northern suburbs of Wollongong, where he and Marie lived for the next two years. Every second Sunday, the couple would drive to Sydney and sightsee around the south coast towns of Kiama and Nowra. They remember visiting the famed Kiama Blowhole, eating hamburgers and chips on the beach, and having fresh seafood straight off the wharf in Wollongong. Once a month in the summer, Michel and Marie would head to the nearby suburb of Dapto to watch the slot-car races.

They also enjoyed going to the drive-in cinema, and although it was sometimes difficult for them to understand the movies, they regarded it as a great way to learn the English language. Marie had spent much of her time in Australia with her sister-in-law Jamal, with whom Arabic was the main language spoken. 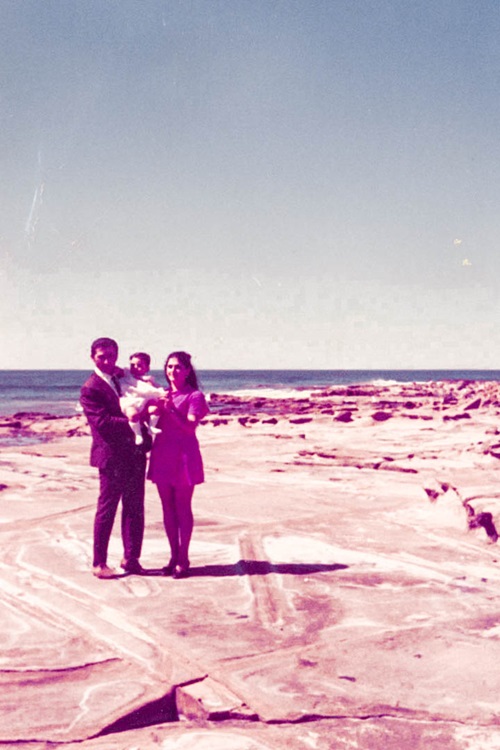 Michel and Marie with their first-born daughter, Saideh, 1971.


Michel and Marie met people of many different cultural backgrounds through Michel’s work at BHP – one of the major employers of post-war immigrants in the Illawarra. Despite some language barriers, the couple recall that people appeared friendly and they felt welcomed. As Michel and Marie became better acquainted with locals and their Australian neighbours, they would invite them over to enjoy home-cooked Lebanese food and barbecues. They immersed themselves in the culture and lifestyle of the lucky country, and became naturalised Australian citizens during a ceremony at Wollongong Town Hall in 1973.

In 1971 Michel and his two brothers purchased six-and-a-half acres (2.6 hectares) of land in the suburb of Albion Park Rail in Shellharbour. They subdivided the land and the local council gave them street naming rights to establish Nehme Avenue. In 1972 Michel and Marie sold their house in Corrimal and rented in Wollongong for the next two years, while they built a new home in Albion Park Rail. They moved into their new home in 1974, by which time they had two daughters, Saideh and Marlene.

In 1974 Michel read an article about the town of Griffith in the Riverina region of south-western New South Wales, which was described as the state’s fruit bowl. He decided to take his two weeks’ leave as a working holiday on a farm in Griffith.

The following year, Michel returned to Griffith with Marie, on the way home from a driving holiday to Melbourne. The couple fell in love with the area and the landscape, which reminded them of Zahlé, and made the decision to move. Although BHP offered Michel a promotion to remain at Port Kembla, his heart was set on starting his own farming business.

In 1976 Michel, Marie and their two young daughters moved to Yenda, about 16 kilometres north-east of Griffith. Marie was expecting her third daughter, Mechlene, at the time. The couple bought a vineyard, which they worked on for the next six years. During this time two more children, Julie and Anthony, were born. 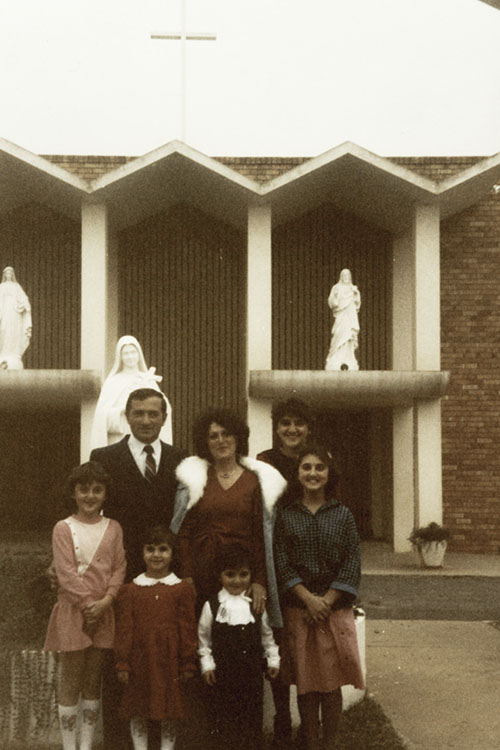 In 1983 Michel and Marie sold the vineyard and purchased a nearby block of vacant land in Yenda to fulfil their dream of establishing their own vineyard. They began by planting a number of varieties of red and white grapes. Michel was known for his meticulous care of the grapes, which he referred to as his children, while Marie was always by his side working in the vineyard. There were plenty of trials, but through sheer determination, dedication and committed hard work, the couple built strong relationships with wineries and the Nehme vineyard flourished.

In the late 1980s, Michel started to leave the golden-skinned Semillon variety of grapes on the vine longer than usual to develop Botrytis Semillon. These are grapes infected by noble rot, the beneficial form of a fungus called Botrytis cinerea, which removes the water from the fruit and concentrates the sugars and flavours within the grape.

Michel became known for producing high-quality berries due to his finesse at cultivating the soil, hand-pruning the vines and handpicking the grapes. As his youngest daughter Julie Nehme explains, ‘It is a tantalising wait to pick the late autumn harvest and suspenseful to watch a fresh crop of Semillon grapes succumb to the ravages of Botrytis. Sugar levels and the Botrytis flavour are monitored daily, to determine the optimum level of ripeness and the desired natural fermentation. The battle of elements is crucial, as humidity, sunlight and a little rain combine to result in the right rot that creates the luscious golden nectar.’ The rotted grapes are used to produce complex sweet wines.

Vines ready for the late harvest to produce the Botrytis Semillon.

Over the following years Michel and Marie replanted their whole vineyard with Botrytis Semillon. They received media attention and accolades from the wine industry for their award-winning Botrytis Semillon grapes. Michel was named the ‘King of Botrytis’ and was even featured on the cover of the leading wine industry magazine, Grapegrower & Winemaker, in 2009. He humbly attributed the success of the Nehme vineyard to his wife Marie and her woman’s touch.

Michel humbly attributed the success of the Nehme vineyard to his wife Marie and her woman’s touch.

Michel and Marie have made a number of return visits to Lebanon but they continue to call Yenda home. The couple recently bottled their own signature boutique wine sourced purely from the Yenda vineyard. A tribute to tradition and true love, it is called ‘Michel Marie’ to symbolise their successful partnership and their love for the land in Australia. At the 2018 Royal Melbourne Wine Awards, Michel Marie 2015 vintage won the trophy for Best Sweet White Wine and received a gold medal, while the 2016 vintage also top-scored and received gold.

Michel and Marie have four daughters and a son. The eldest, Saideh, works in communications; Marlene is a multicultural officer; Mechlene is a vocal teacher; Julie works in the media and is the general manager for Michel Marie wine; and the youngest, Anthony, is an accountant.

Julie Nehme registered her parents’ names on the Welcome Wall to recognise both the life and the journey they made for themselves in Australia, as well as the opportunities they opened up for their five children.

As Michel Nehme says, ‘Life in Australia is like winning the lottery twice for the opportunities to create two amazing lifetimes, firstly in Corrimal and Wollongong, and then in Yenda.’