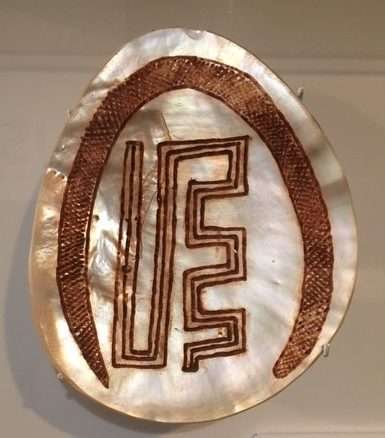 The museum has been fortunate to host a travelling exhibition on the history of pearling and the uses of pearl shell. The award winning exhibition – Lustre: Pearling and Australia – has been very well received by visitors but unfortunately will close soon. If you haven’t seen it yet, do yourself a favour and get along to the National Maritime Museum before August 13. Lustre is full of fascinating objects and interesting stories, particularly the long cultural importance of pearl shell in north western Australian Aboriginal communities.

Some of the first people in the world to appreciate the beauty of pearlshell and to use it in art, ceremonies and as an item of exchange, were the Aboriginal people of the northwest Kimberley coast. Here, shell could be collected in shallow water on the king tides. The undecorated shell is called guwan and riji is the shell that has been engraved.

Guwan and riji were traded vast distances across Australia in gift and ceremonial exchange networks that stretched to southern Western Australia, South Australia and into western New South Wales and Queensland. To the Saltwater people of the northwest, the brilliance and shimmer of the guwan is considered to reflect water and the sea. Carving guwan into riji is regarded as a boost to an individual’s spiritual well-being and expresses connection to country and ancestors. The wearing of riji often marked the transition to adulthood.

Some of the many pearlshell buttons on display in the Lustre exhibition. These are English ‘sporting buttons’ from around 1800. On loan courtesy Robyn Caddy, member of the Victoria Button Collectors club.

When the Europeans arrived in Australia they already had a hankering for the lustrous pearlshell. During the 18th century it had become a desirable fashion item. Not only was it shiny and decorative but it could be finely engraved such as these buttons from around 1800. A lucrative business could be made from gathering pearlshell – as well as pearls, if one was lucky enough to find them occurring naturally.

The desire for pearlshell generated the pearling industry of the northwest from the 1860s, firstly with free-diving and then the introduction of hard hat diving and large fleets of pearling luggers. At times unscrupulous and exploitative, at others an economic opportunity for Aboriginal people, the pearling industry became synonymous with Broome up to the 1950s when plastic finally replaced natural materials for buttons.

Lustre tells the long story of the use of pearlshell by Aboriginal people and the development of the pearling industry in the north and northwest of Australia. It is a unique look at objects from various private and public collections put together by two emerging Indigenous curators – Maya Shioji and Bart Pigram. The award winning exhibition from the Western Australian Museum was commended for its engagement with communities. Lustre is a wonderful, evocative and personal overview of the pearl and pearlshell in Australian culture. When you come and visit before August 13, make sure you drop by our collection of floating vessels and see the John Louis – one of the last pearling luggers built in Broome in 1957.

Lustre: Pearling and Australia is included in our FREE galleries ticket and closes August 13, 2017.

View all posts by Stephen Gapps→
Posted in: Exhibitions , Arts and Culture
↑