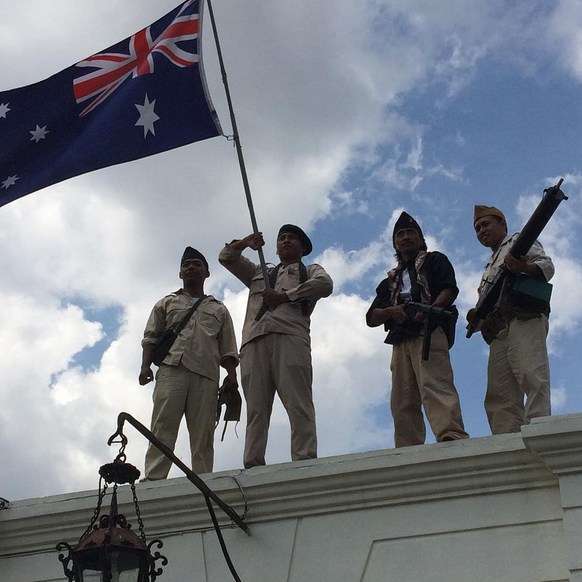 In a spirit of collaboration, historical reenactors wave the Australian flag from the ramparts at the opening of Black Armada (Armada Hitam) at the Museum Benteng Vredeburg, Yogyakarta on 31 August 2015.

Exhibition openings in Indonesia are really something. At the Black Armada (Armada Hitam) opening at the Museum Benteng Vredeburg, Yogyakarta on 31 August there were decorations, traditional dancers, prayers, speeches, a sumptuous feast, and to top it all off, an explosion-packed historical re-enactment of a battle by Indonesian freedom fighters.

I arrived at the Museum Benteng Vredeburg last week to prepare for the opening of the Australian National Maritime Museum’s travelling exhibition Black Armada, which showcases Australian support for Indonesia’s struggle to maintain their independence against Dutch attempts to re-colonise Indonesia between 1945 and 1949.

After a couple of days installing, sourcing materials, working out schedules and getting used to the heat and humidity, it soon became apparent that the opening event was going to be bigger than Ben Hur. 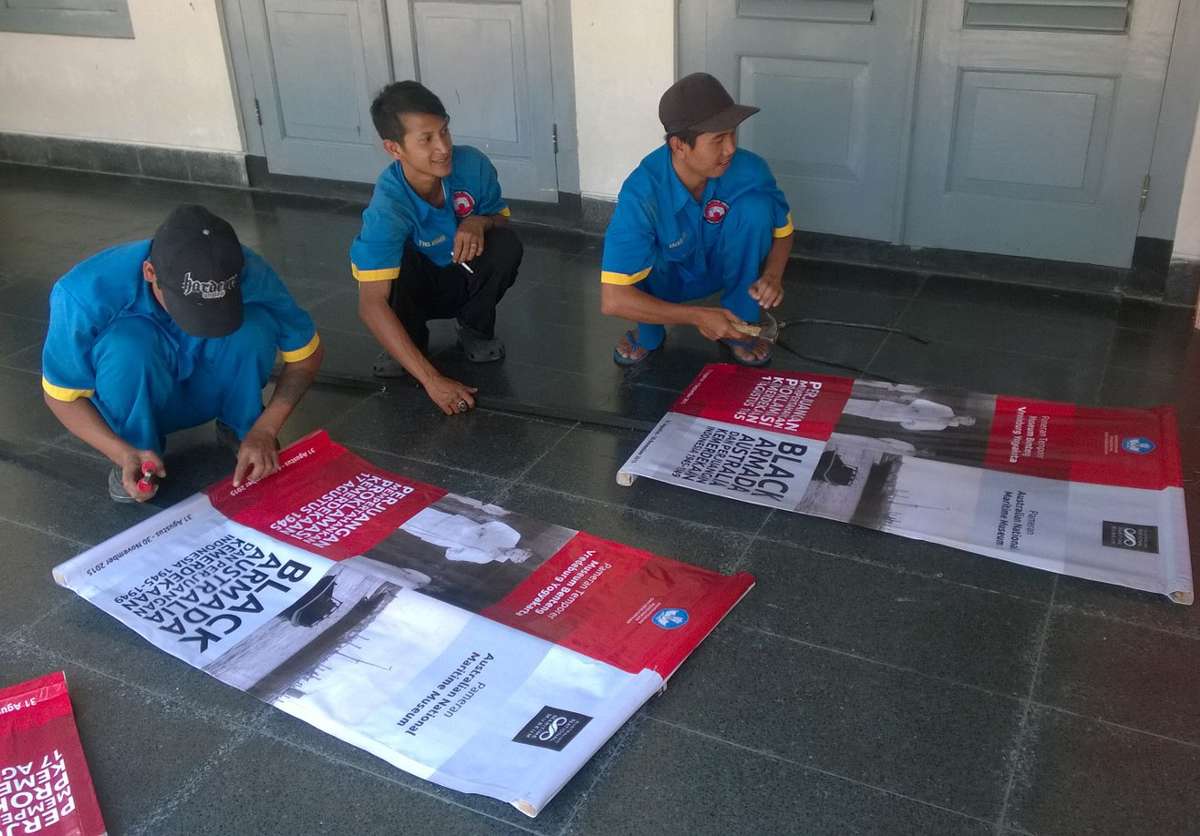 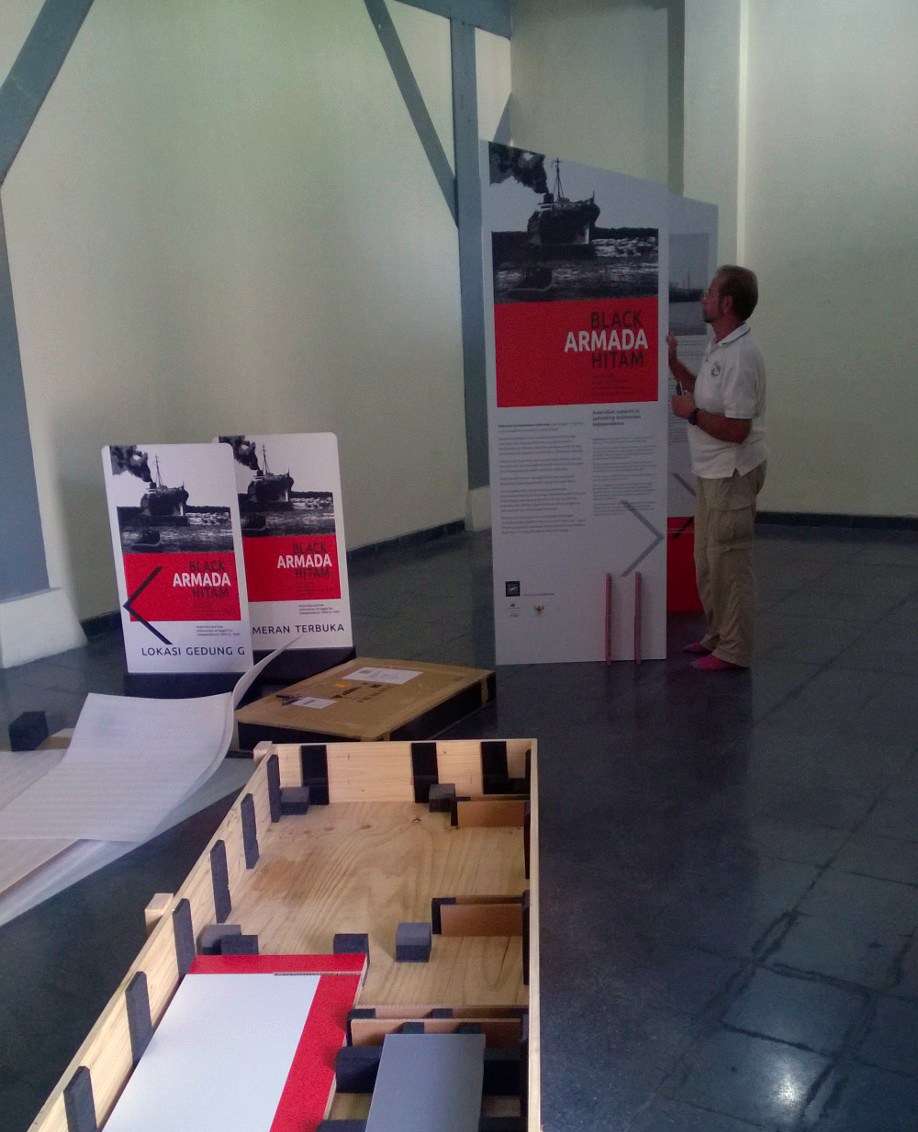 The wonderful staff at the museum were preparing banners and flags, building signs, stages and marquees. The always smiling and energetic Senior Curator Pak Haris was an inspiration. Registrar Pak Ngahidin seemed to be able to put his hand to anything and built the display case for the exhibition video.

Pak Hendi, the museum’s graphic designer, thoughtfully and professionally considered the themes and overall look of the display. Deputy Director Pak Agus and Education and Publicity officer Pak Rosid were most helpful. And all this under the auspices of the charming Museum Director Ibu Azzah.

In fact, the exhibition was two displays. The Museum Benteng Vredeburg took the opportunity of hosting our modest travelling exhibition to create a temporary exhibition of their own. It was created in a complementary style and told the wider story of the Indonesian Independence struggle. Usually in Indonesian depictions of this iconic story of national struggle, Australia doesn’t rate a mention. However this new display includes not just the actions of the Australian maritime workers who ordered black bans against all Dutch ships returning to Indonesia in late 1945, but also the critical actions and support of the Indian and Chinese Seamens Unions based in Australia. 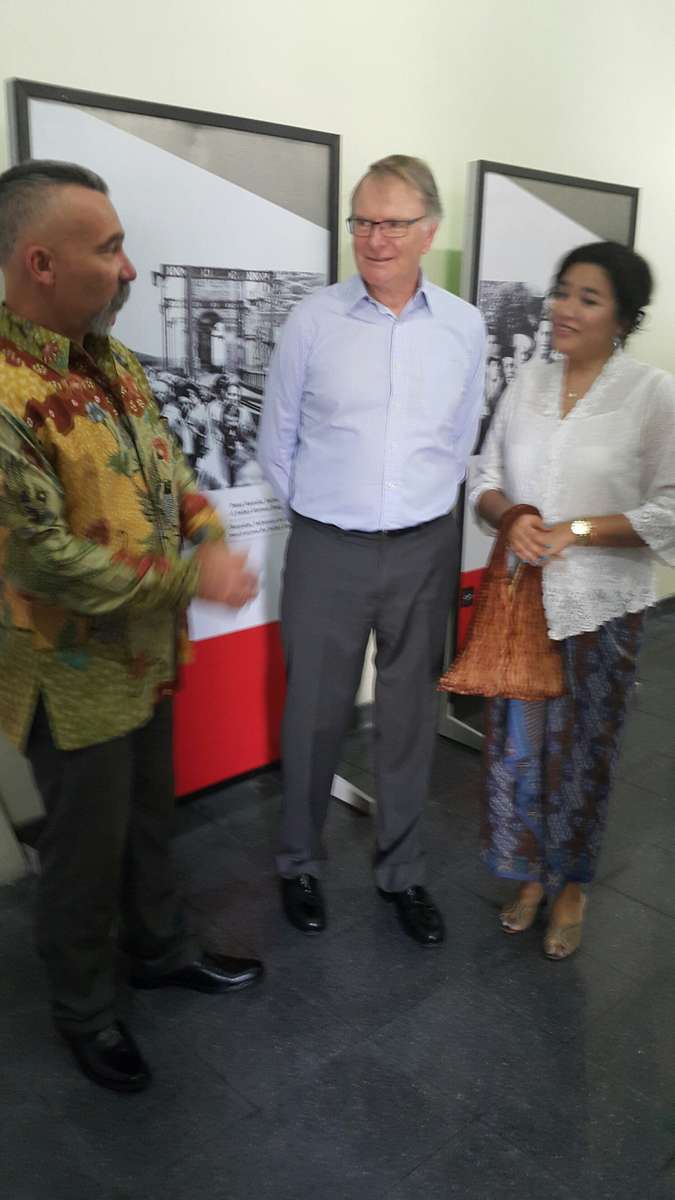 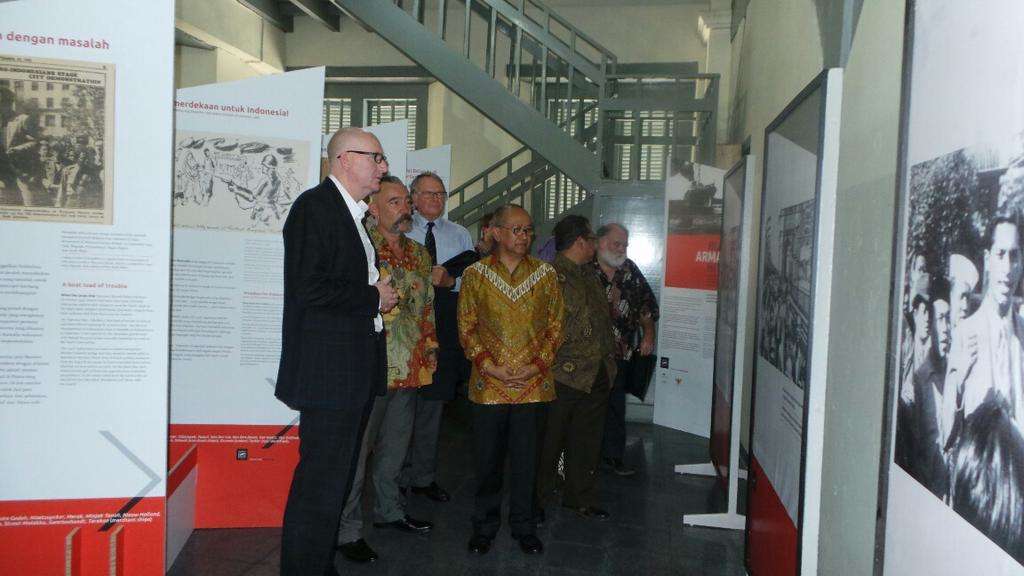 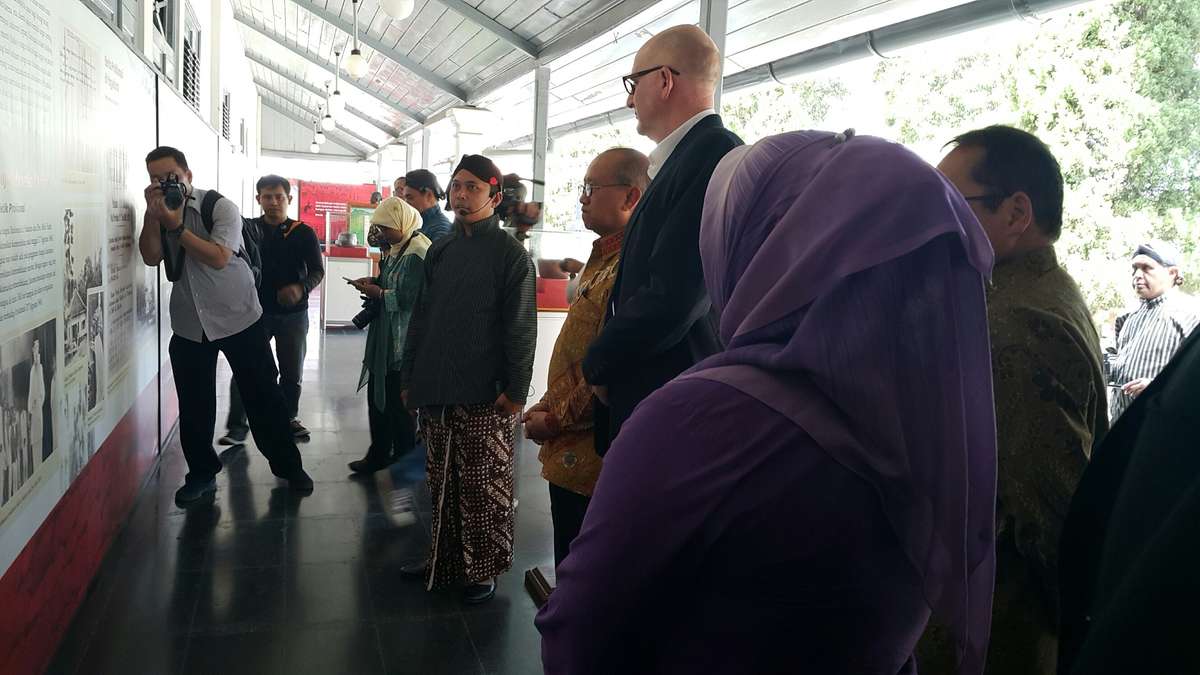 While Australian and Indonesian diplomatic relations have been a bit frosty of late, it was wonderful to see both Pak Dubes Riphat Najib Koesema Indonesian Ambassador to Australia and the Australian Ambassador to Indonesia Paul Grigson attending the opening. In their speeches both Ambassadors were keen to point out that despite some differences along the way, the broader picture of Australian-Indonesian connections over time has often been overlooked. Ambassador Grigson noted the hundreds of years of trade relations between Makassan bech de mer fishers and Indigenous people in northern Australia. Ambassador Koesema noted that the borders of the two countries are closer than Sydney is to Canberra. 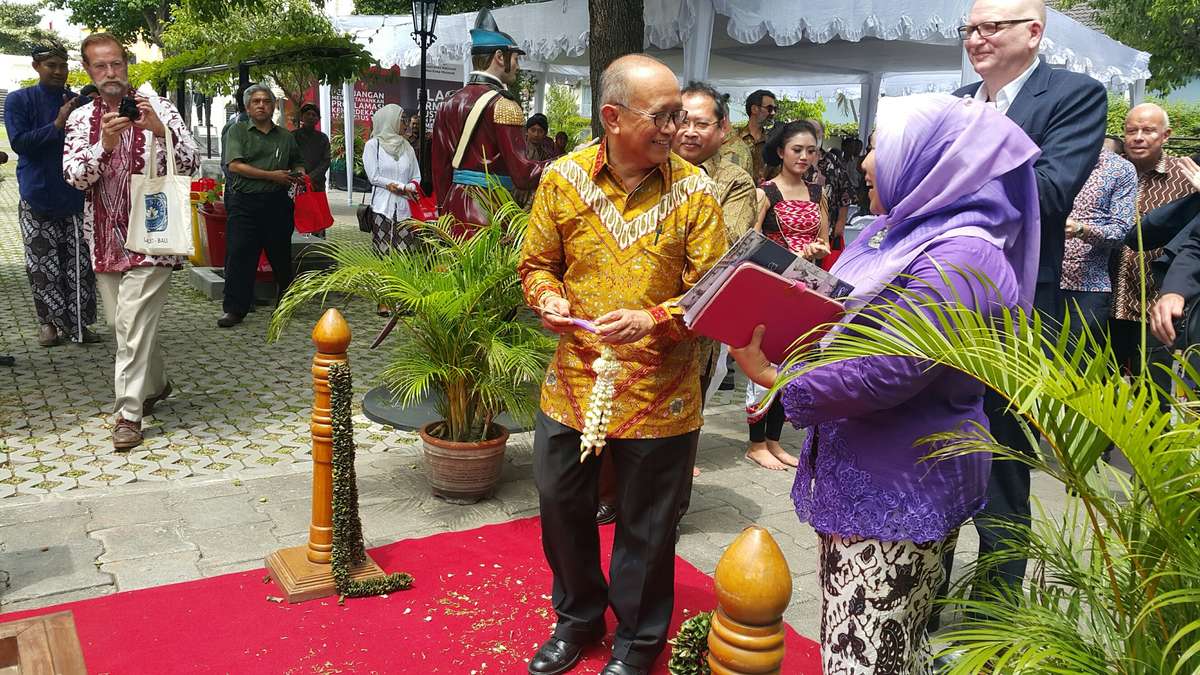 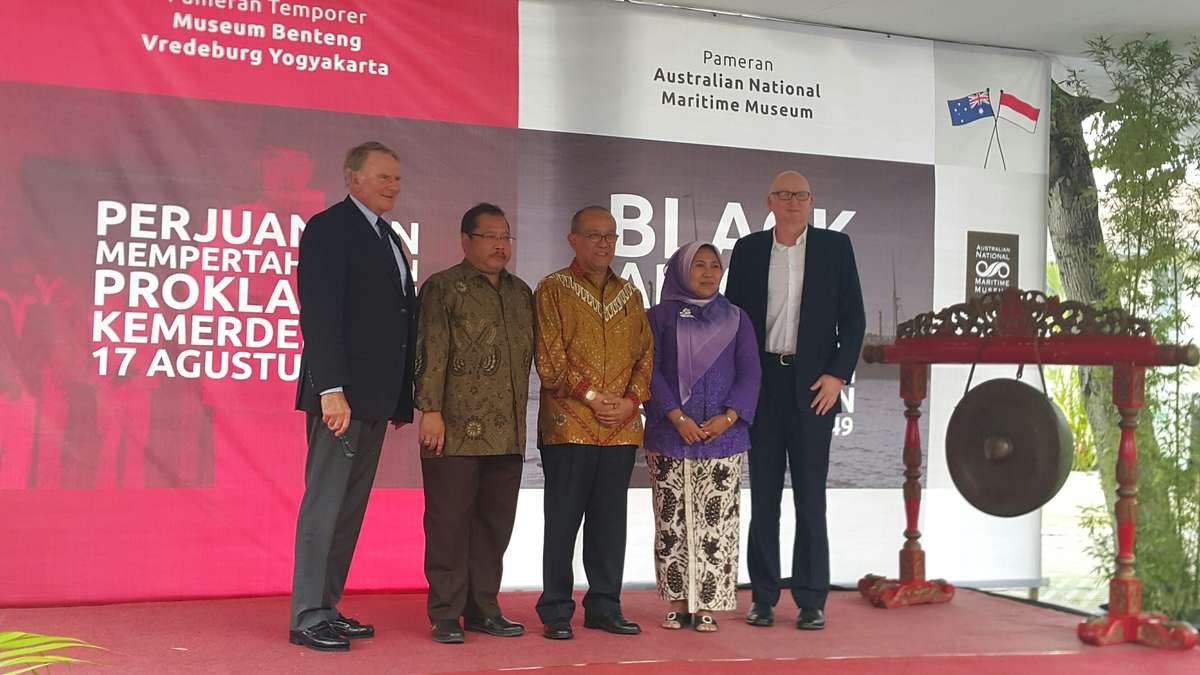 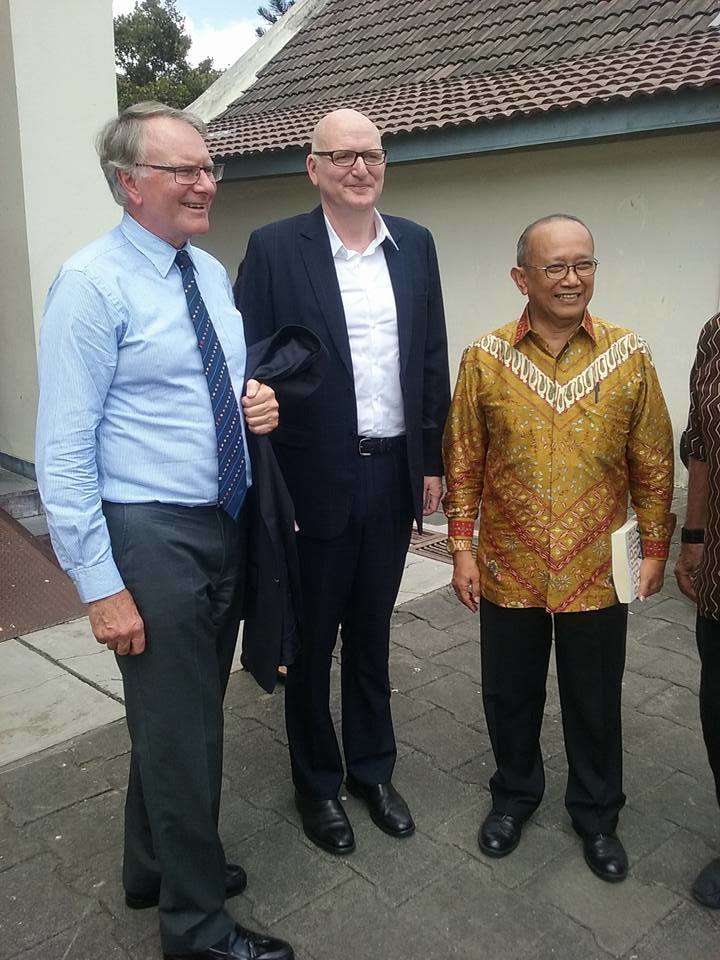 Despite the sweltering heat and humidity the Chairman of the ANMM Peter Dexter AM gave a wonderful thank you to the museum and noted the importance of maritime connections between the two countries that made for excellent collaborative projects and future opportunities. Peter then exchanged presents with Ibu Azzah. After the speeches and more dancing, the gong was struck to formally open the exhibition and Bapak Suryanto delivered Do’a oleh, or prayer of thanks. 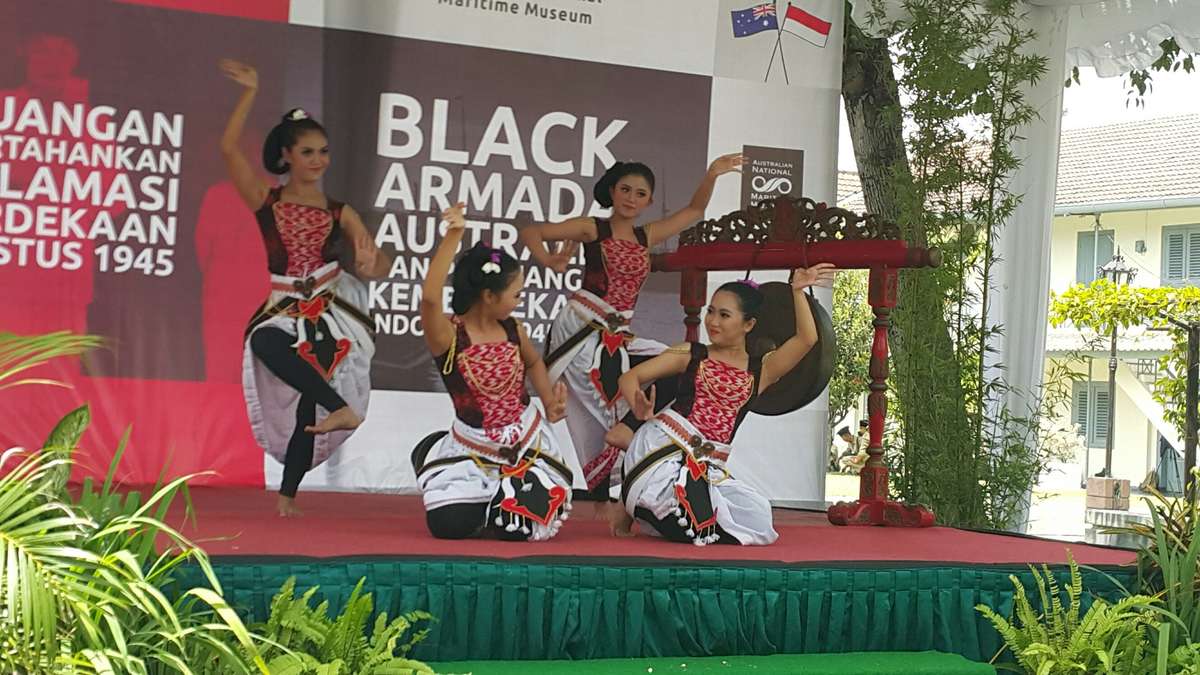 Dancers at the opening of Black Armada. Photo: Stephen Gapps 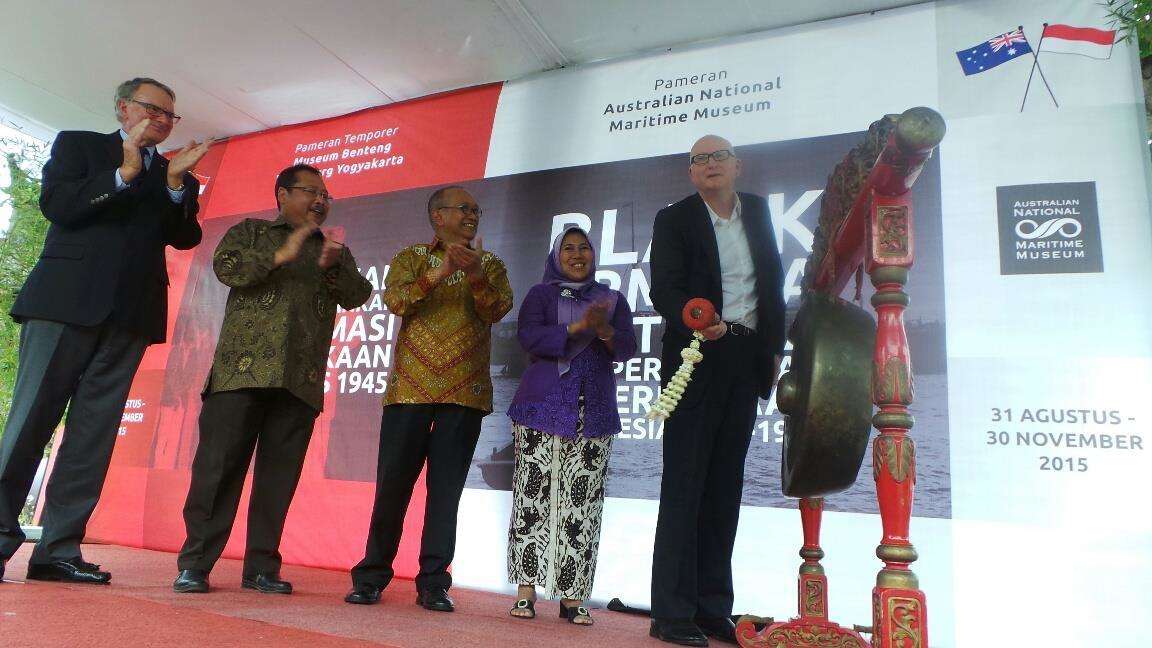 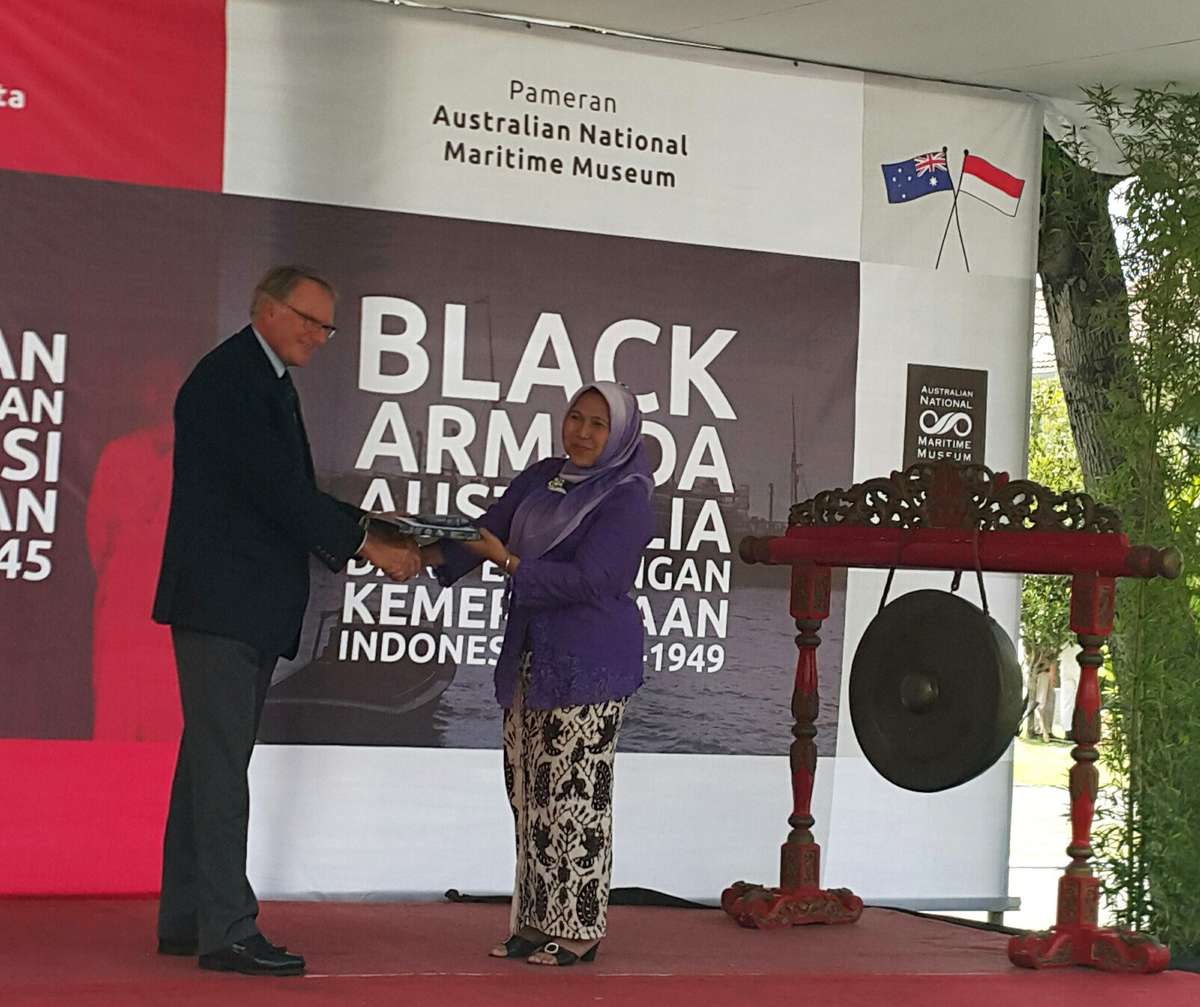 The collaboration between an Indonesian and an Australian museum about a shared history attracted significant media attention both here in Indonesia and in Australia. After a tour of the displays, the over 100 guests retired to the air-conditioned rooms for a wonderful feast of Indonesian food.

But one of the most intriguing events was still being staged. In the forecourt of the museum a group of historical reenactors — Djogjakarta 1945 — was conducting a recreation of the important battle that occurred right here in these museum grounds.

On 1 March 1949 a force of Indonesian Republican fighters stormed the fortress and swept the Dutch garrison aside. The battle occurred at a critical point in the Indonesian struggle to maintain independence. With at first British (and Japanese) assistance, the Dutch military forces had re-conquered most of Indonesia. Only pockets of resistance fighters held out, mainly in remote areas of Java. The Dutch were claiming they were in control of Indonesia once more. 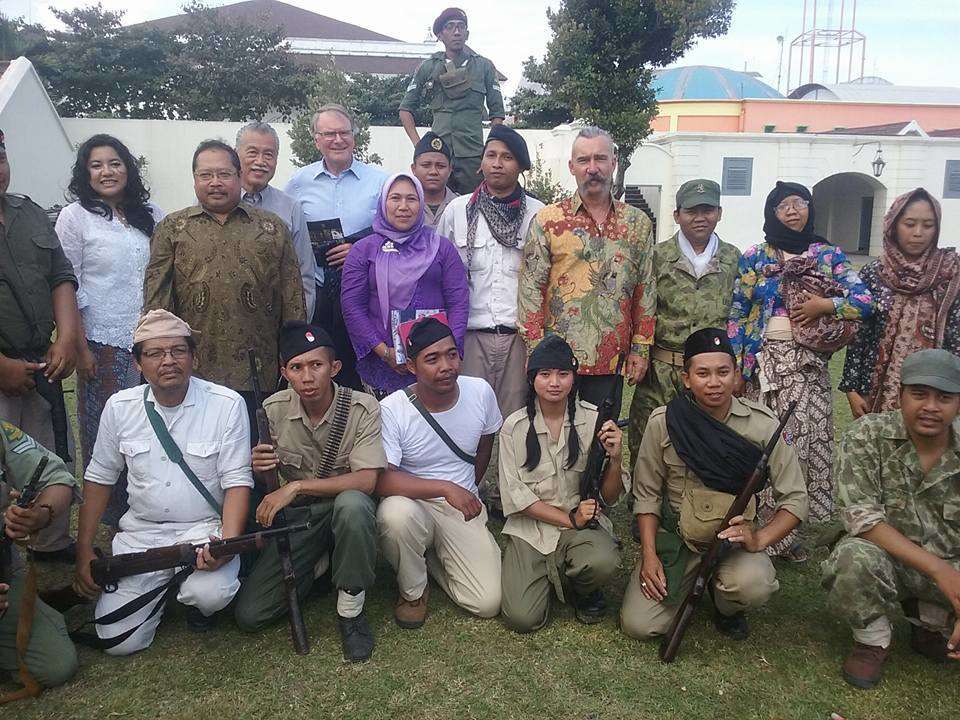 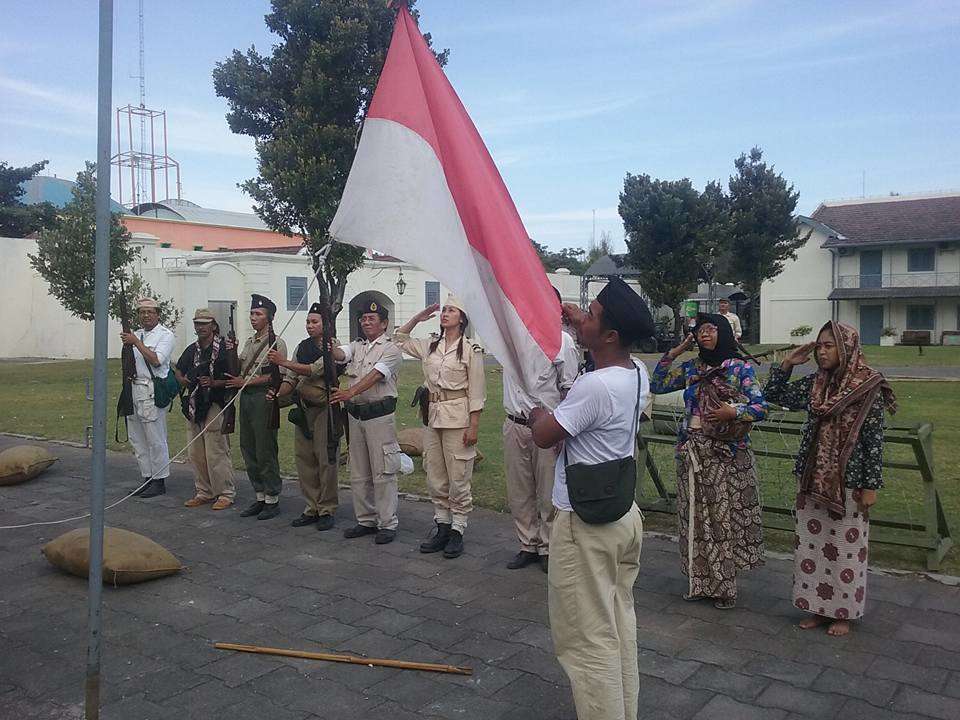 But the leaders of the Indonesian Republic knew that while guerrilla tactics had been successful in continuing the struggle against the superior military power of the Dutch, a major victory in open combat was needed to both tell the world that Indonesian forces still existed, and to galvanise support from the Indonesian people.

While the taking of Benteng Vredeburg and Yogyakarta was momentary — the Dutch called reinforcements and quickly took it back — it showed the Indonesian people that there was indeed a capable and committed Indonesian republican force. By the end of 1949, the war against the Dutch was over and they recognised Indonesian independence. The 1 March General Offensive or Serangan Umum is now commemorated annually as a significant moment in the independence struggle.

Support for Indonesian independence from Australia had begun with the radical labour movement, maritime workers and trade unions. By 1949 it had become part of the Chifley Labor government platform and Australian support in the international recognition of Indonesia was prominent. It had also come from such sources as Chinese-Australian businessman Fred Wong, who donated money and purchased Catalina flying boats to drop supplies to the beleaguered Indonesian resistance. But that’s another story. 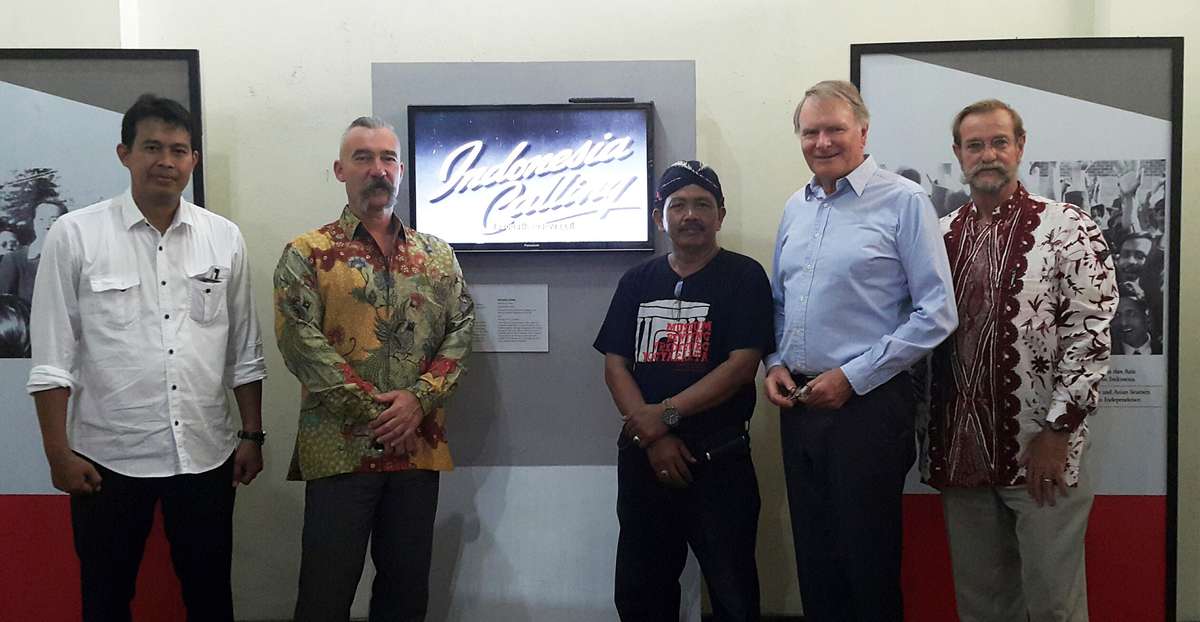 The Museum Benteng Vredeburg must be congratulated for putting in such a wonderful effort and sincere collaboration with the Australian National Maritime Museum, and for hosting such an amazing opening. I’m sure it bodes well for future collaborations in maritime history and archaeology.

Black Armada is on show at the Australian National Maritime Museum until 24 February 2016.

View all posts by Stephen Gapps→
Posted in: Exhibitions
↑