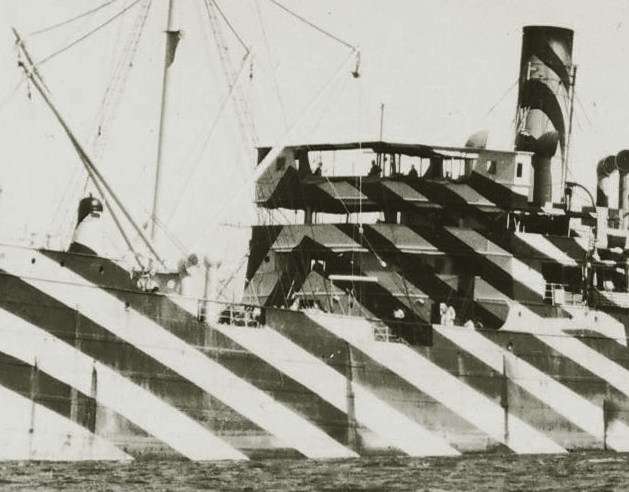 Dazzle pattern on a merchant vessel during WWI. ANMM Collection

Towards the end of World War I large numbers of merchant ships were brightly painted in bizarre geometrical patterns known as ‘Dazzle Painting’ later known as dazzle camouflage. The aim was to thwart German U-boat captains who had been destroying large amounts of shipping. The colour scheme was designed to confuse and deceive an enemy as to the size, outline, course and speed of a vessel by painting sides and upperworks in contrasting colours and shapes arranged in irregular patterns. The idea, in essence, was to confuse U-boat captains by making it difficult to plot accurately an enemy ship’s movements when manoeuvring for an attack, causing the torpedo to be misdirected or the attack to be aborted.

Before WWI there had been some experimentation with camouflage for military purposes in the United States and Britain. This had its origins in natural scientists studying camouflage in animals. Professor J. Graham Kerr, Regius Professor of Zoology at Glasgow, was one who saw the further application of these principles in disguising ships at sea. Kerr wrote to Winston Churchill, the first lord of the British Admiralty as early as September 1914 outlining his methods for ‘diminishing the visibility of ships at a distance, based on scientific principles’.

At first the application of paint schemes was ad-hoc. A soldier in the New Zealand army on his way to the Dardanelles in April 1915 ‘saw a good example of maritime camouflage – a town class cruiser painted grey and black and white to resemble a storm-tossed sea’. In September 1915 a Royal Navy commander reported that his ship was referred to as a zebra after it was ‘painted in a coat of striped camouflage’.

Early in the war the effectiveness of the schemes was never proven and in 1915 the Admiralty decided that its warships would be painted a uniform grey. However in early 1917 Germany resumed a campaign of unrestricted submarine warfare, which was initially highly successful in sinking large numbers of merchant vessels. In April that year, artist Norman Wilkinson, then a lieutenant in the Royal Naval Reserve at Devonport, had an idea for a paint scheme that could protect merchant vessels from submarine attack. He wrote to the flag officer at Devonport proposing to ‘paint a ship with large patches of strong colour in a carefully thought out pattern and colour scheme … which will so distort the form of the vessel that the chances of successful aim by attacking submarines will be greatly decreased’.

In June 1917 Wilkinson’s ideas were backed by the Admiralty and he was given studios and 18 other artists to set up a ‘Dazzle paint section’. Paint schemes were designed and applied to scale-sized models that were then assessed in a ‘viewing theatre’, set up from the point-of-view of an enemy torpedo operator. This involved placing the models on a rotating turntable and viewing them through a submarine periscope under various lighting conditions. Designs were then drawn up on paper and sent for implementation to various ‘dazzle officers’ around Britain. By 1918 more than 4,000 British merchant ships and 400 naval vessels were painted in dazzle schemes. 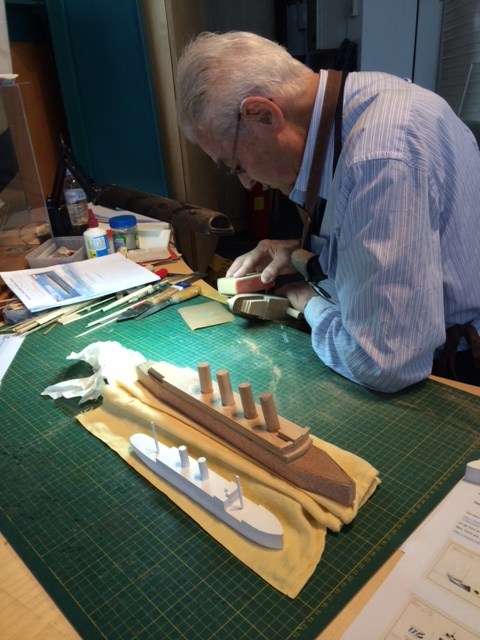 Over the last few weeks at the museum, volunteer model maker Col Gibson has been making replicas of these models used to test dazzle patterns. He now has a veritable fleet of dazzle boats, with ‘before and after’ examples. The models are on display at the model makers bench in the museum – on the ramp leading to the exhibition War at Sea – The Navy in WWI.

An enquiry into the effectiveness of dazzle was carried out by the Royal Navy in 1918 and it concluded that it had little impact on the rates of attack. Importantly though, it was found to be signficant in raising the morale of merchant seamen – often undertaking the frightening task of sailing without protection from submarines during the war. 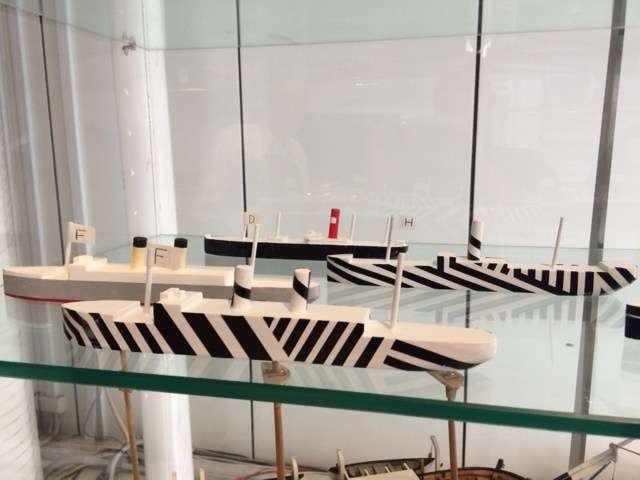 Model ‘F’ is HMT Royal Edward before and after dazzle painting. Model ‘D’ (at rear) is HMT Essex before dazzle scheme. 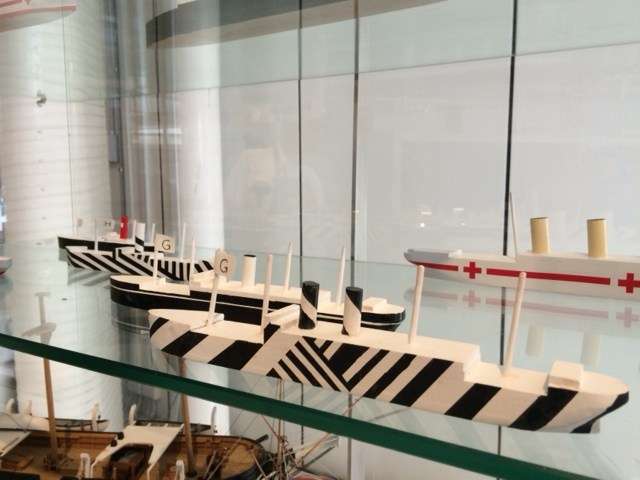 Model ‘G’ is RMS Lusitania before and after dazzle scheme. At rear is the hospital ship HMHS Britannic.