Imagine a sailor, navigator or tactician and you don’t picture them in a blazer. Blazers are part of a formal uniform which need to be viewed alongside other artefacts to reveal their character and meaning. Most of the jackets and blazers in the sporting collections at the museum have been collected as part of a selection of material related to sporting personalities, but here I’ll detail a few of them in isolation, to chart some of the key campaigns during Australia’s participation in the America’s cup. 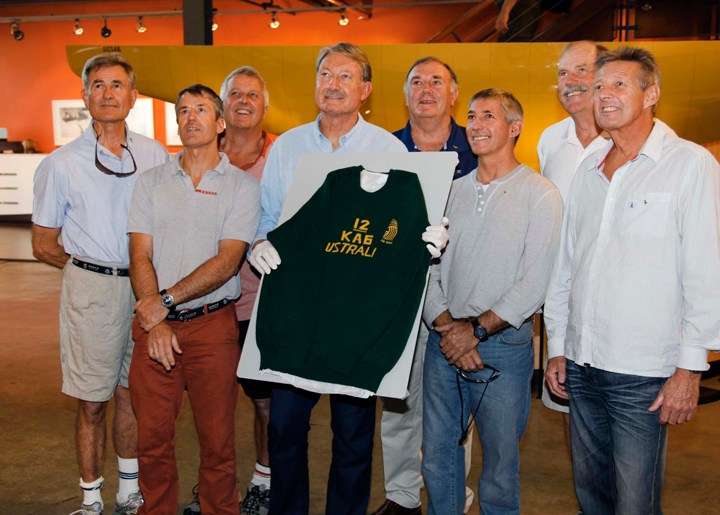 In the years leading up to 1983 Australia had won the right to challenge every three years bar one since 1962. Then Sydney media baron and sailor Sir Frank Packer bankrolled the Alan Payne designed Gretel to scare the Americans a little with its efficient winch system, deck layout and speed to windward. With six further challenges moving from the east to the west coast of Australia the two countries had enjoyed a twenty year rivalry. 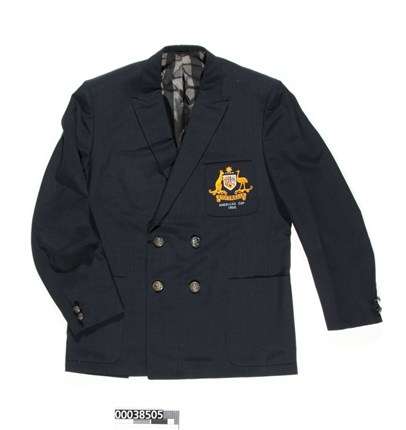 So we have blazers from Australia’s first challenge in 1962, that of crewmember Trygve Halvorsen of the eponymous firm which built the yacht and we have blazer and a jumper from wunderkind designer Ben Lexcen whose legendary winged keel is credited with the theatre and drama of Australia II’s win. Both blazers evoke the tradtion and formality of yachting circuit while Lexcen’s jumper would no doubt have been of more comfort to him practically. This clothing is part of broader collections related to both men, both designers, which include plans, patterns, drawing boards, photographs, scrapbooks and other apparel. 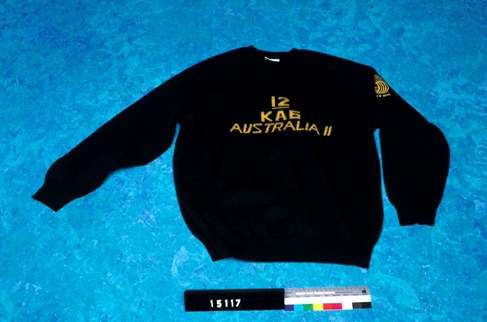 Closer to our curatorial practice at the museum today is volunteer Leon Cremer who comes to the museum once a week to research boats and boat builders for the Australian Register of Historic Vessels – and what a wonderful person to do this kind of work Leon is. Leon is a lifelong sailor who has competed since he was fifteen, racing skates (14 foot skiffs) on the Parramatta River with Concord Ryde Sailing Club. Leon progressed to the Dragon class, then to ocean racing on the Caprice of Huon in the Sydney to Hobart Yacht Race from 1968 and Koomooloo in the 1971 Admirals Cup. 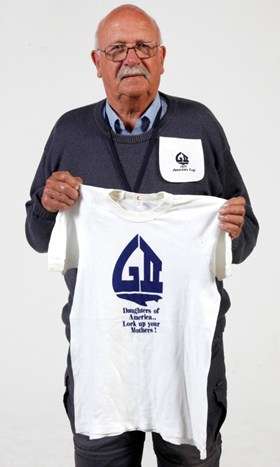 Last week I asked Leon where he was when Australia won the America’s Cup in 1983. He said, “glued to the television of course” and then divulged that in 1977 he had in fact been part of an Australian America’s cup crew in Gretel II, Gordon Ingate’s Sydney syndicate. Gretel II narrowly missed competing for that unwinnable Cup, beaten by the Swedes in the Challenge series. The second Australian crew at Newport, Western Australian Alan Bond’s crew in Australia eventually won to right to challenge the dominant American team in Courageous. They lost the series 4-0. Two Cups later, in 1983 it was to be Alan Bond’s Australia II, also designed by Ben Lexcen which won the Cup from the Americans after 132 years.

So what did Leon do in the crew? And what was life like at Newport? And what does his t-shirt and blazer reveal about the campaign? In a crew of about 20 Leon was reserve forward hand who looked after the rigging, constantly making wire to rope splices for the running backstays. Aged 36 he was about the average for the sailing crew back then led by skipper Gordon Ingate, aged in his fifties.

While the sailing competition was tough, the social life was even tougher! The crew spent more than six weeks living at the White Sea, a former mansion, some in shared rooms. One can only imagine what the crew got up to. The white t-shirt emblazoned G II – Daughters of America.. Lock up your mothers is one of Leon’s few personal souvenirs from that 1977 America’s cup series. The inscription refers to the mature age of the crew, whose commensurate experience was necessary because of the short training period for Gretel II campaign. The subversion of the historical adage Mothers of America lock up your daughters, caused some consternation. Leon was issued with a formal team uniform – the white blazer and trousers of which only the blazer pocket inscribed GII – 1977 America’s Cup remains.

One of the most high profile jackets in the museum’s care was not worn by a sporting personality at all and the thing is, it is not the original at all but a replica. The original is loaded with significance and is emblematic of Australia II’s unprecedented victory. But so too the replica evokes that moment. For those of you around in 1983 think back to Australia’s America’s Cup win. What do you recall? Beyond the furore which ensued after the yacht glided across the finish line it would have to be Australia’s sports-mad Prime Minister in the ‘Australia’ jacket celebrating in the early hours at the Royal Perth Yacht Club, declaring an unofficial national holiday. 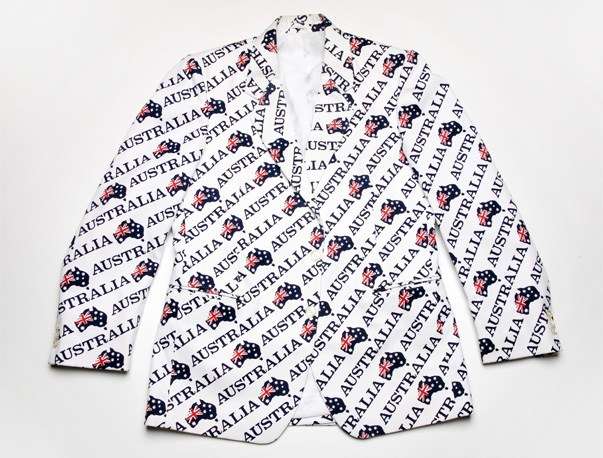 The replica of the Australia jacket affectionately known as Bob Hawke’s jacket.

Some years ago, the Australian National Maritime Museum developed an exhibition exploring the America’s Cup and sought high and low for the Australia jacket. This was well before the viral rewards of social media and our attempts proved fruitless. So we commissioned a replica, so important did we feel it was to capture the zeitgeist of that moment – a moment when Australia celebrated an elite yachting win in an event many didn’t know existed, led by its former trade union leader Bob Hawke, six months into the job as Prime Minister. In many ways the unprecedented win and charming but slightly larrikin national celebration with that jacket personified Bob Hawke’s character and the spirit of renewal of the era. Business entrepreneurs like Alan Bond (who subsequently made business mistakes) were elevated to hero status and Australia was brimming with optimism after a recessed economic period and social challenges of the 1970s.

After 1983 the Cup competition moved to Fremantle, the home of Bond’s syndicate at the Royal Perth Yacht Club. This sparked massive infrastructure and tourism development which transformed the port city in preparation for the racing in 1987.

Several years later the museum was contacted by WA architect Paul Burnham about the jacket. It was he who had worn it the Royal Perth Yacht Club that morning, when club officials whisked it from him to fit to the ebullient Prime Minister. Paul had been living in the United Kingdom for some years and had missed the public appeals for the jacket. It is now on loan to the Western Australian Maritime Museum. 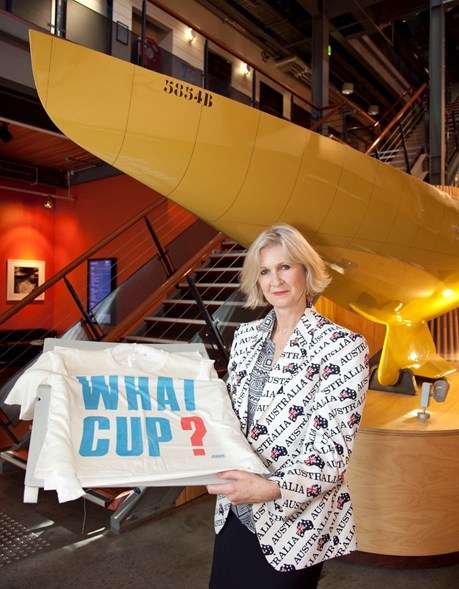 The weeks and months of the campaign received saturation coverage across Australia while the challengers from around the world raced for the right to topple the Australian yacht Kookaburra, skippered by Iain Murray. The Cup was lost but curators spotted another textile artefact as a must have which again appeared to capture the nuances and shifts in the mood of a nation about such a national preoccupation – keeping the Cup. The What Cup? t-shirt too was eagerly sought after, spotted in TV footage and eventually acquired from a passer-by on Sydney streets – oh the curatorial hunt! Ironically the t-shirt is in the national maritime collection where it attracts optimum storage and conservation attention. The jacket though is registered as a prop so while stored well, it can in fact be worn and is well-travelled.

View all posts by Daina Fletcher→
Posted in: From the collection , Arts and Culture
↑