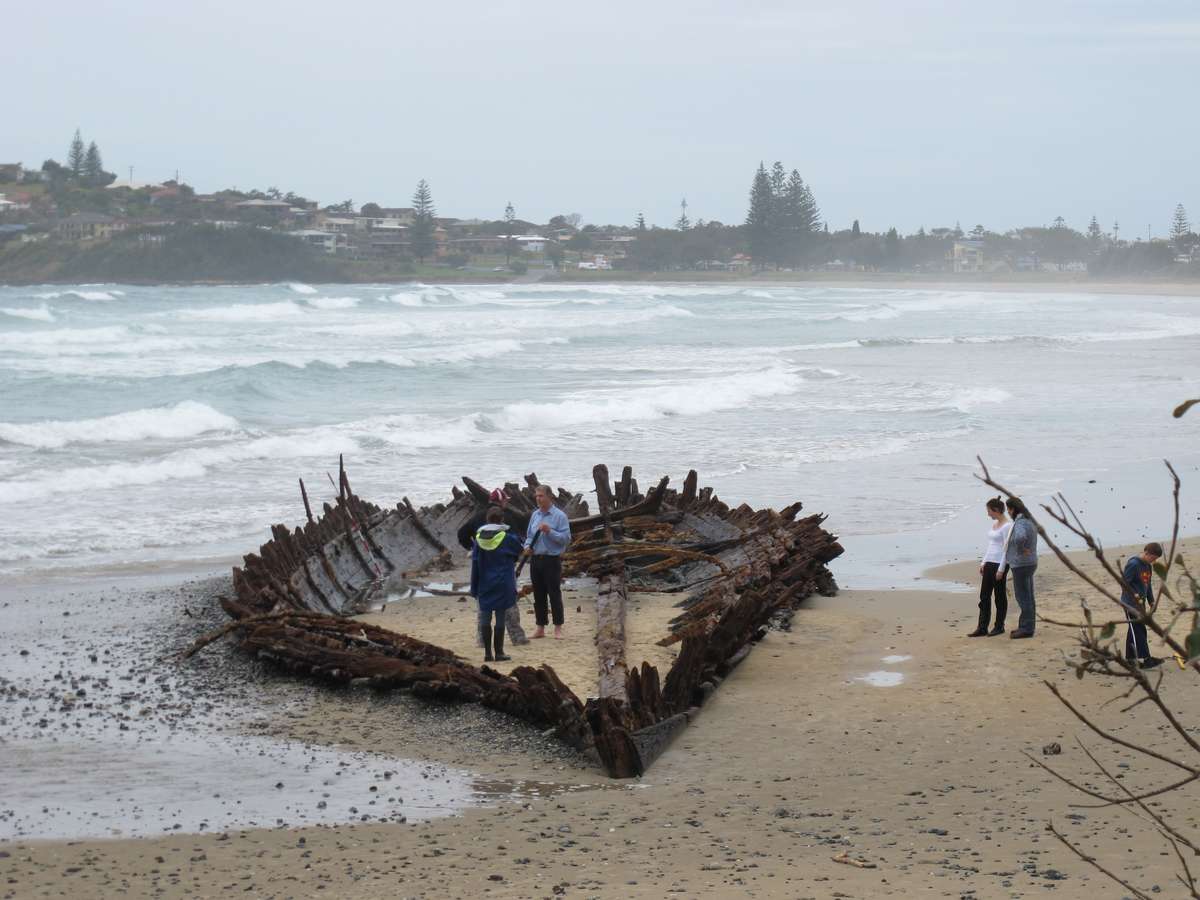 The wreck of Buster at Woolgoolga Beach

Recently Dr. Brad Duncan from the Heritage Office, Department of Environment and Heritage and Kieran Hosty from the Australian National Maritime Museum travelled to Woolgoolga on New South Wales mid north coast to examine the remains of the Canadian built 310 ton gross, wooden, three-masted barquentine  Buster that had been exposed when winter storms had stripped away several metres of sand from the town’s main beach.

Now known for the largest Sikh / Punjabi population in regional Australia and its annual Curry Festival towards the end of the 19th century Woogoolga (the name was not officially changed to Woolgoolga until 1966) was the heart of a thriving sugar, timber-getting and sawmilling district.

Although first gazetted as a town in 1888 it was the construction of a 1557 foot long government jetty in 1891 that saw several sugar mills and timber mills open in the area. Whilst the sugar industry never really developed the timber mills, connected by bullock tracks, tramways and light rail to the densely forested Jesse Simpson Ranges, saw Woogoolga mill owners take advantage of the insatiable demand in Brisbane and Sydney for grey gum, white mahogany, tallowwood, grey box, turpentine and Australian cedar. In only a few short years millions of feet of sleepers, sawn timbers, piles, logs and fence palings were being exported from the port and Woogoolga was rivaling Coffs Harbour as the principle shipping port along this section of the coast, it was even considered – for a short time – as being capable of coping with significant overseas trade.

Although the jetty at Woogoolga was given some protection from the south by Green Head, its roadstead was open to storm driven seas and swells from the east and north, making the loading of timber difficult if not impossible at times. During these occasions the waiting vessels would tie up at one of the offshore moorings before coming alongside the jetty.

The barquentine Buster (a barquentine is a three masted vessel which is square rigged on the fore mast and carries fore and aft rig on its main and mizzen masts) departed Sydney for Woogoolga in mid-February 1893 to load timber at Woogoolga for various New Zealand ports. The vessel arrived safely at Woogoolga but due to the blustery conditions could not get alongside the jetty and put down two anchors and ran several hawsers to one of the offshore moorings whilst waiting for the conditions to moderate.

Unfortunately over the next few hours conditions deteriorated rapidly and early on the morning of Friday 17th February the port anchor cable parted followed shortly afterwards by the starboard – for the next nine hours Buster rode out the waves moored by the hawsers alone to the mooring buoy but shortly after 7.00pm a huge sea struck the vessel, and first one then the other hawser parted.

Pushed by the howling gale Buster drove through the breakers crashing onto the beach stern first with its bow facing towards the south. The crew, seeking safety from the breaking seas, climbed into the rigging and come dawn found themselves wet, cold, shaken but safe almost high and dry on the beach a mile or so to the north of the town.

Although the vessel had not broken up in the surf it proved impossible to salvage and after several attempts was given up as a total loss with the sand slowly covering over the vessel’s remains until only a few of its timber frames and iron riders poked above the surface of the beach.

Due to severe winter storms over the last one hundred or so years the sand covering the  Buster has been scoured away from time to time revealing what appears to be an amazing jumble of well-preserved timbers lying on top of the beach just below the high water mark.

Looking through the eyes of an archaeologist however this jumble can take on new meanings offering insights into late 19th century wooden ship construction.

When you first sight Buster as it lies on the beach only a few metres away from the Lakeside Caravan Park at Woolgoolga you see what you first believe to be the bow of the 129 feet (39.31m) long barquentine facing towards the north with several rows of timber appearing above the sand on either side of the bow and then running south towards the smooth curve of the stern.

But looks can be very deceiving – generally speaking in 19th century timber shipbuilding the lower down in the hull you go the blunter or rounder the bow becomes as it takes on the shape of its bow or cant frames and the stern becomes finer and narrower as it runs back towards the rudder. Following a quick inspection the correct position of the bow and stern can be confirmed – by examining the way the vessel has been sheathed in copper (a necessary precaution against the fouling of the timber hull by marine organisms) with the overlap facing towards the northern end rather than the south and the presence of the anchor chain locker at the southern end of the site.

The rows of timber also take on a more ordered appearance – they are in fact the remains of the port and starboard lower floors and first and second futtocks – which make up the frames (or ribs) of the vessel – held in place by the vessels inner and outer planking and secured by numerous fastenings. Lying between the port and starboard side of the vessel and running almost the entire length of the site are several massive timbers some 11 inches (280mm) wide by 12 inches (304mm) high sitting on top of an even larger partially exposed timber.

That the Buster was massively built is an understatement – usually vessels in the vicinity of 350 to 400 tons have floors and futtocks approximately 10inches (254mm) square  – Buster’s are 12inches (304mm)  and the space between the futtocks is negligible giving the spectator the impression  of an almost solid wall of timber an impression supported by the intactness and size of its internal planking – called ceilings – which are at least 8 inches (200mm) thick.

Besides its massive construction the vessel is substantially fastened with its outer and inner planking secured to the frames by a series of regularly spaced timber fastenings, called treenails, copper alloy nails and occasionally spaced iron bolts – The presence of iron bolts is a surprise given the significant corrosion problems that occur between iron bolts coming into contact with the copper sheathing until you realise that the iron bolts are only present above the copper sheathing and were used to secure iron straps – called riders – to the internal planking.

Although well built there are also several indications that construction at the Canadian yard was also a little hurried at times – with a number of the floors and futtocks being butt jointed (end on end) rather than having scarph joints – an altogether much stronger if slower method of construction – We also observed that on a number of occasions the shipwrights either missed the frames when driving home the fastenings, managed to drive the fastenings through the edge rather than the centre of the internal and external planking or neglected to put a fastening into the frame or outer plank altogether.

Usually, as a maritime archaeologist, all my wrecks lie submerged underwater and wholly or partially buried under deposits of sand, coral and rock – to get the opportunity to visit an exposed site such as Buster is a great experience and testament to the craft of Canadian shipbuilding, the preserving nature of the sand which covers the site for most of the year and a testament to the people of Woolgoolga – who proud of their maritime heritage are eager to protect  the site for future enjoyment and study.

The wreck of the Buster is a protected historic relic under the NSW Heritage Act.

I would like to thank David Greenhalgh, Projects Officer, Marine Park Authority and Dr. Brad Duncan, Heritage Office for giving me the opportunity of examining the remains of this historic shipwreck.