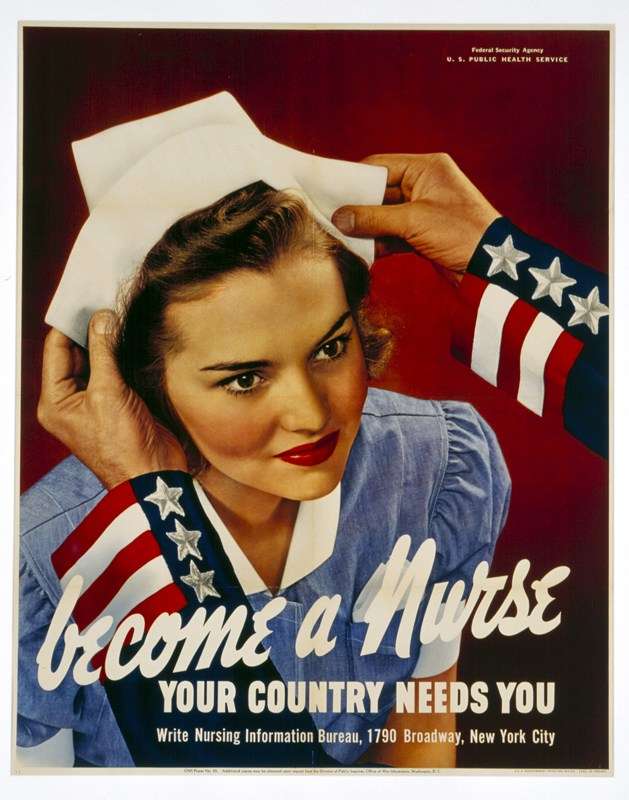 Who can forget the evocative cinematic representations of World War II? The Great Dictator springs to mind, an anti-Nazi imitation of Adolf Hitler satirised on-screen by one of the most famous comedians of all time, Charlie Chaplin. American propaganda posters, however, also register as creative and eye-catching statements about the war. The famous image of ‘Rosie the Riveter’ has been imprinted onto our minds, arm muscles exposed with the words ‘We Can do it!’ emblazoned above her. Since her first appearance in 1943, she has morphed into a symbol for the feminist movement. Despite this change in meaning, she reveals how the propaganda poster acted as a strategic tool for governments, designed to communicate the role of women in a society marred by the chaos and uncertainty of war. 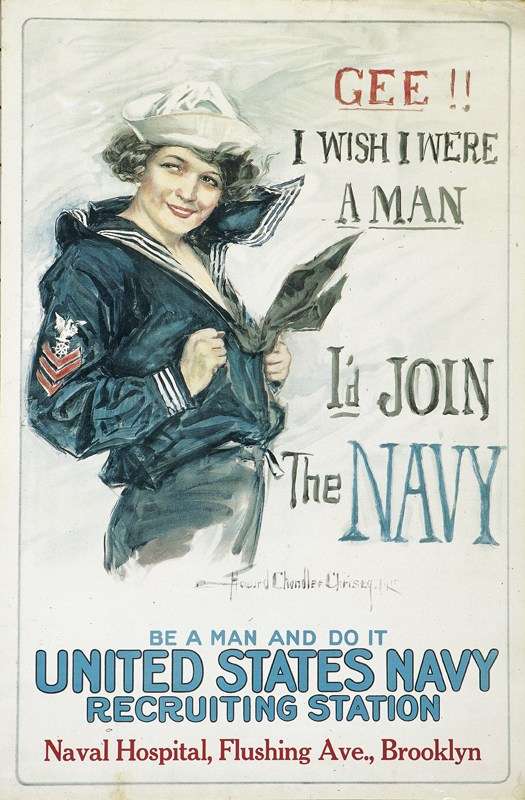 The poster in this week’s Object of the week, demonstrates how the United States Office of War Information carefully targeted women with the aim of increasing the war effort. The poster, created in 1941, depicts a woman peering upward toward the unseen figure of Uncle Sam, who is placing a nurse’s hat on her head. On the surface, the emphasis appears to be on the nurse. Underneath this representation of maternal femininity, there is a sense of urgency and duty, with the words ‘Your Country Needs You’ providing the clincher. This contrasts with an earlier World War I poster, aimed at galvanizing men to enlist. In this image, a woman is depicted in a seductive pose and wearing a sailor’s uniform declaring ‘Gee!! I wish I were a man. I’d join the Navy’, clearly a tactical ploy designed to shame men into enlisting.

By the time World War II broke out, propaganda posters still gravitated toward traditional representations of femininity, but were designed for a different purpose. They targeted women directly and presented them in passive and supporting roles. As the war progressed, productivity became the focus of the homefront and women were depicted in traditionally masculine roles such as factory work and the army corps. The American Women’s Army Auxiliary Corp issued posters to generate recruits. One 1942 poster depicts a woman in military uniform standing under a silhouette of Athena, the Greek goddess of war. By 1945, the tragic losses accrued during the war were filtering through to the public consciousness. Posters thus took on a more personal note. This one called for ‘ten thousand registered nurses’ to sign up ‘for a glorious service of mercy’. It depicts a female nurse tending to a wounded serviceman and wearing an emblem of the Caduceus, a symbol of ‘life for our wounded, hope for our homes; a future, not just a past for those fighting men.’ 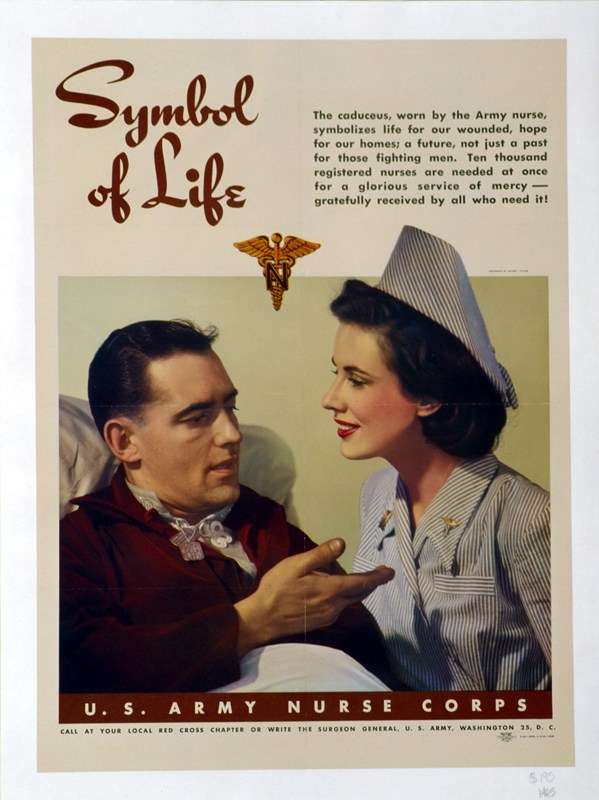 In this sense, the posters of the 1940s portray femininity as an innate and essential quality that can be harnessed to aid the war effort. They had taken on a commercialised quality, engaging viewers with more life-like and colourful images. These commercial qualities were effective. American women, whether motivated by patriotism or that ‘maternal instinct’, joined the American work force as nurses, factory workers or members of Auxiliary Armies. By July 1944, over 19 million women were employed in jobs traditionally undertaken by men. This newfound independence, however, did not last long. After the war, things were expected to go back to the way they were before the war started. Women were given a taste of what it was like in jobs traditionally appointed to men, and in the postwar years, they experienced relegation and even dismissal from their wartime positions in the face of returning servicemen.

These posters are exaggerated representations of social and cultural attitudes toward the role of women during the war, but they are important because they reveal broader perceptions of the role of women within society. These social issues are often overlooked in light of the more “important” political and historical messages the posters convey. Propaganda posters were powerful political tools. They were striking illustrations of key concepts and issues such as freedom, war, politics and gender. Although it would take years before the image of ‘Rosie the Riveter’ re-entered the public consciousness as a symbol for gender equality, her enduring presence is testament to the crucial role that propaganda played in perpetuating the war effort. ~ NC

View all posts by Nicole and Penny→
Posted in: From the collection , Arts and Culture , Navy and defence
↑