The tragic story of the Batavia and the ensuing mutiny and violence is well known. The Dutch East India Company (VOC) cargo ship foundered on the Abrolhos Islands off the Western Australian coast whilst en route  from the Netherlands to the ship’s  namesake Dutch colonial city,  Batavia, (present day Jakarta, Indonesia).

When the Batavia started breaking up, the crew and passengers were ferried to nearby islands in the ship’s boats, whilst food, water and provisions were salvaged.

Meanwhile a group of mutineers had formed under Jeronimus Cornelisz, who had been plotting to take the ship and turn to a life of piracy. 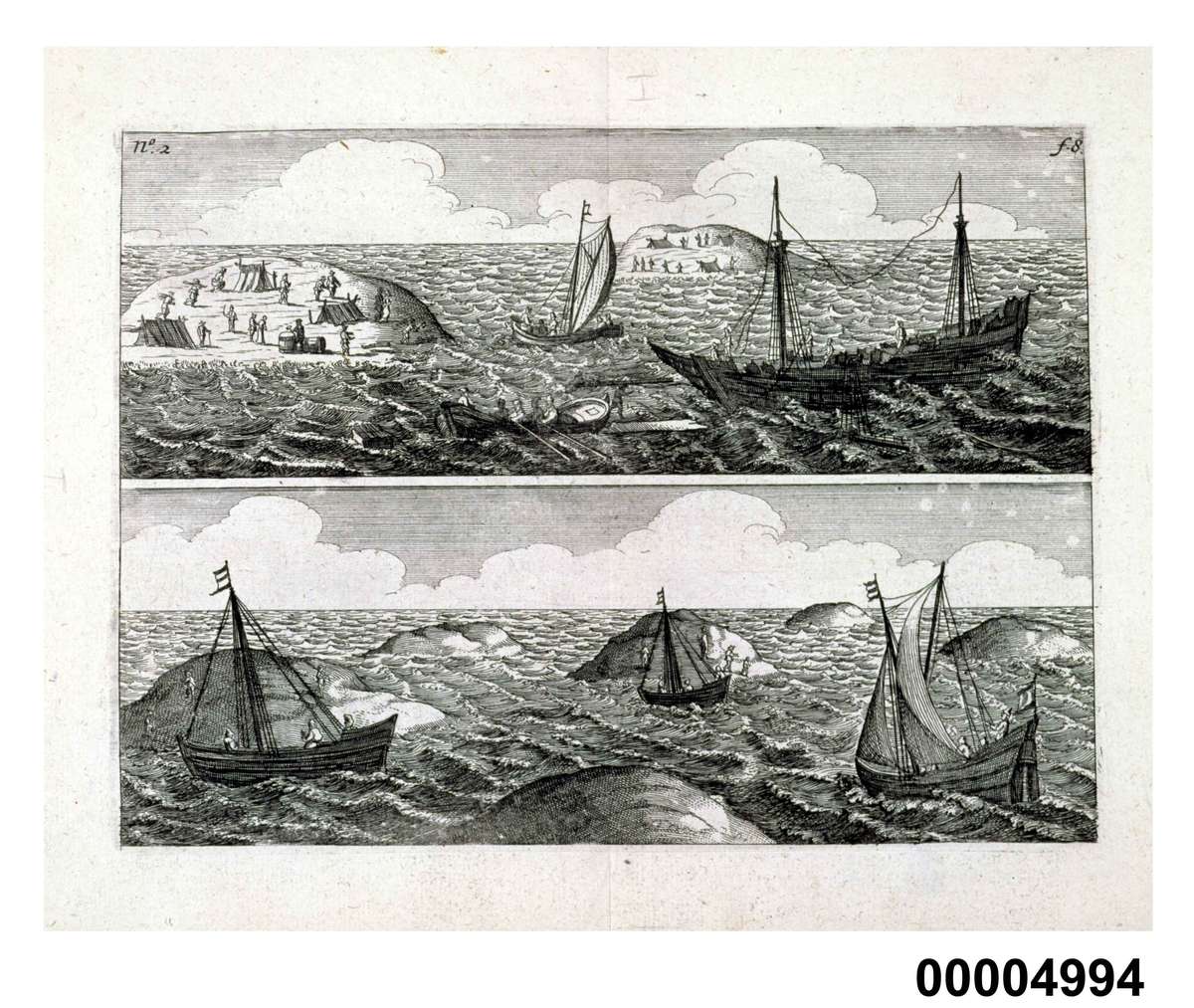 The top image depicts survivors on two islands with the Batavia in foreground. The bottom image shows an unsuccessful search for water in the Batavia's sloop. The engraving is from the book 'Ongeluckige Voyagie van't Schip Batavia, nae de Oost-Indien' published by Jan Jansz, Amsterdam, 1647. ANMM Collection.

When the Batavia‘s captain Francis Pelsaert set out to reach Batavia in the ship’s long boat, Cornelisz marooned 20 of the soldiers on a neighbouring island with the excuse of searching for a water source, took control of the remaining 268 survivors and all the weapons and then proceeded to murder anyone who he perceived as a threat to his command or a burden on supplies. Eventually, Cornelisz and his fellow mutineers killed 125 men, women and children.

Fortunately for the soldiers, under the leadership of Wiebbe Hayes, they had found a source of water on their island and they remained defiant against the mutineers. Hayes started making weapons out of debris from the Batavia and built a (still extant) stone fort. The soldiers held out against attacks from the mutineers until Pelsaert arrived in a rescue ship.

Pelsaert tried and executed the leading mutineers, including Cornelisz. Two were marooned on the Australian mainland.

The shipwreck of the Batavia was largely forgotten about – and mis-identified – until in 1963 it was ‘re-discovered’. The site was analysed by archaeologists and is now protected under the Commonwealth Historic Shipwrecks Act. The wreck site contained a vast array of items, including cannon and other armaments.

The musket barrel from the Batavia is constructed of a copper sheet that has been joined and soldered. This copper tube is 81 cms long. With an opening of 2 inches, it is too wide for a musket ball, so if it was indeed used to fire lead shot, it would have been ‘grapeshot’ or several musket balls together.

There are 2 small brackets on the ‘seam’ of the barrel and it has been suggested these were for attaching it to a musket stock. The barrel also has a small hole at the closed end, right where a touch hole would be. At first glance it looks very much like a very large calibre matchlock musket barrel. 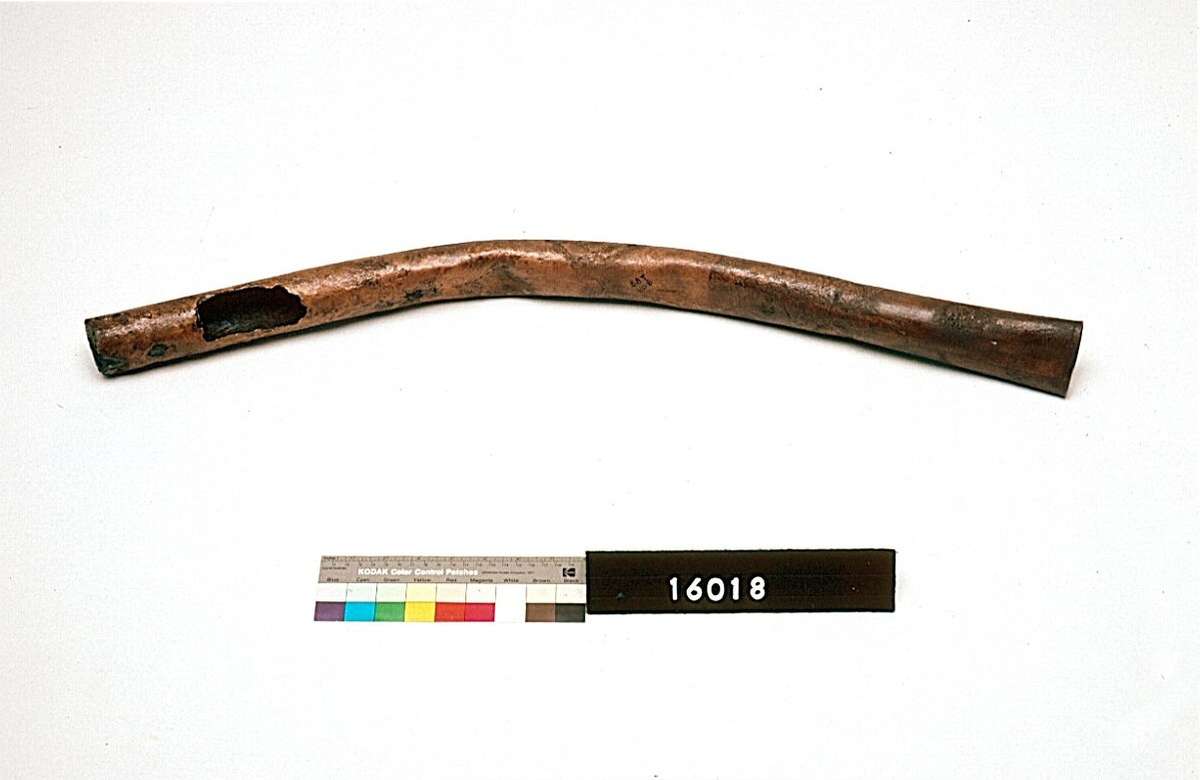 Note the oval shaped hole near the bottom end that has been suggested may have been for breech loading the 'musket'. There were traces of lead in the end near the 'touch hole'.

Copper sheeting is not strong enough to contain a gunpowder charge to eject shot. Yet copper barrels were indeed used in the 17th century. The Swedish Army during the Thirty Years War (1618-1648) experimented with so-called ‘Leather Guns’, which were small, lightweight artillery pieces that used iron and sometimes copper, bound by wire or cord and then encased in leather. Although it was not by any means perfect, apparently this construction was strong enough to successfuly fire round shot. The Leather Gun was taken up by the Scots in the English Civil War.

There is also a surviving 17th century example of a copper barreled leather covered blunderbuss from Germany. The leather gun was cheap to produce and still effective at firing cannister or grapeshot at short range. It became too hot after several rounds, but still would have  served well as either a blunderbuss or a swivel gun where only a couple of rounds were designed to spread a large amount of lead shot.

Did the Batavia have such guns? Is this a type of  ‘leather gun’? If not, exactly what is it?

Any suggestions on the matter of the mysterious copper barrel would be greatly appreciated!

View all posts by Stephen Gapps→
Posted in: History and Colonisation , From the collection , Vessels
↑