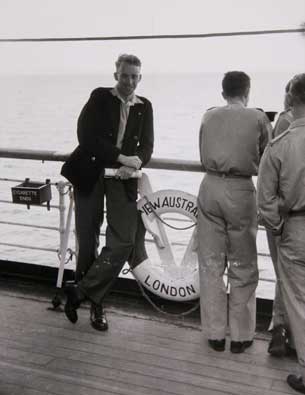 Vaughan Evans served in the Royal Navy’s Fleet Air Arm during World War II. After the war he worked as an assistant hull underwriter for Bland Welch and Co at Lloyd’s of London. In 1955 he agreed to take over Prudential Assurance Company’s Australian marine insurance portfolio in Sydney. Having always wanted to travel to Australia or New Zealand, Vaughan took advantage of the Australian Government’s post-war assisted migration scheme and paid £10 for passage on SS New Australia. The British migrants who travelled under this scheme were later nicknamed ‘Ten Pound Poms’.

Did you know more than one million Ten Pound Poms arrived in Australia between 1947 and 1972?

In January 1955 Vaughan boarded New Australia at the southern English port of Southampton, waving goodbye to his girlfriend and neighbours as he set sail for Sydney. The vessel passed through Valletta, Malta, and then Port Said, where it was swarmed by bumboats selling bags, wallets, fabric, baskets, food and other goods.

After passing through the Suez Canal and Aden, New Australia crossed the Arabian Sea and arrived at Colombo, Ceylon (now Sri Lanka), on 5 February. Around this time, the hot cramped conditions began to take their toll on Vaughan and his fellow passengers. In his diary Vaughan wrote:

... my own cabin is one of the least desirable – it is on the lowest accommodation deck (‘D’ deck); it is on the starboard side – the hot side; it is immediately opposite the toilets and so we have the doubtful benefit of the late night serenades of the semi-drunks.

On 7 February New Australia crossed the Equator and three days later Vaughan saw the Southern Cross for the first time. On 13 February, he awoke at 6.30 am to see the west coast of Australia: ‘Low, sandy and scrubby, but Australia never the less’. After port calls in Fremantle and Melbourne, New Australia sailed into Sydney on 20 February and docked at No 23 Shed, Pyrmont. Vaughan was met by Mr Reg Wyatt of Prudential and taken to his accommodation at Williams’ Private Hotel on Campbell Parade, Bondi, which the company provided for the first month.

In September 1955 Vaughan was posted to Prudential’s Melbourne branch and stayed there until 1959, when he returned permanently to Sydney. He worked for the Prudential Assurance Company until his retirement in 1984.

Vaughan remained passionate about maritime history while living in Australia. He was an advisor and consultant on maritime history issues to Federal and State governments and institutions, and as such both advocated and gave shape to the formation of the Australian National Maritime Museum. Vaughan’s extensive personal library, donated to ANMM in 1986, formed the nucleus of the museum library’s holdings. Vaughan was awarded the Order of Australia Medal in 1988 for his role in raising the standards and profile of the discipline of maritime history. He died in 1993.