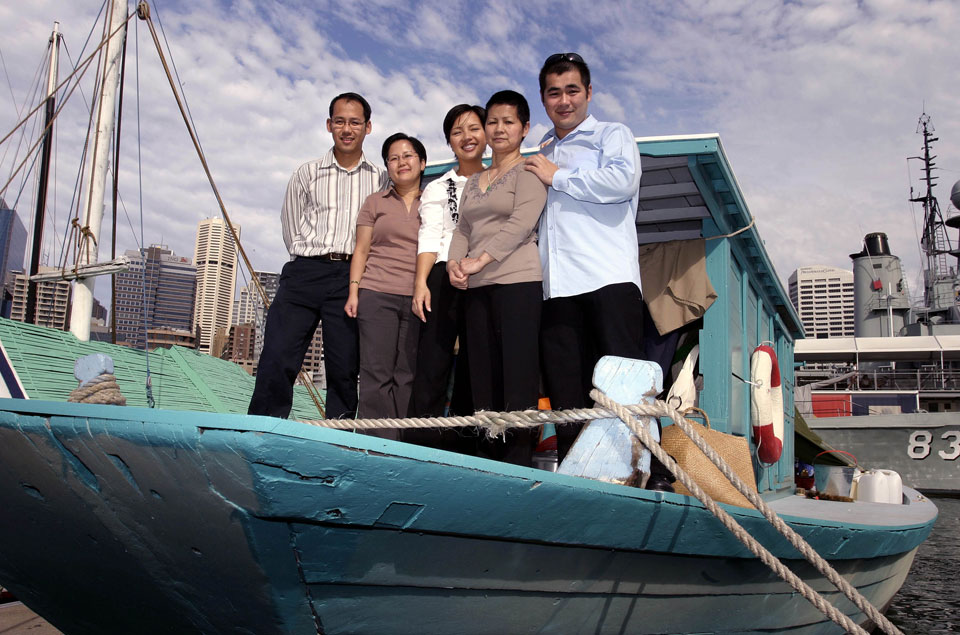 After the fall of Saigon to Communist forces in 1975, thousands of Vietnamese fled their country, many in overcrowded, leaky boats headed for Australia. The exodus coincided with a major shift in Australia’s immigration policy – which had previously favoured British migrants – and most were allowed to stay.

In 1975, 30-year-old Tan Thanh Lu owned a thriving general store on Phu Quoc Island in Vietnam’s south. With three friends he pooled resources and built a boat that he named Tu Do, meaning ‘Freedom’ in Vietnamese. Although built specifically to escape Vietnam, to keep it inconspicuous it was constructed like typical fishing craft used on the island. Tan initially used it for fishing to avoid suspicion and to help pay for crucial supplies which were hidden in his fellow voyagers’ homes.

When he was ready to escape, Tan staged an engine breakdown so that surveillance of Tu Do would be relaxed. He installed a more powerful replacement engine by night and his group of 38 passengers set off in the dark in September 1977, pushing the boat across kilometres of tidal shallow water to maintain silence before starting the motor. The children had been given cough medicine to keep them quiet, but, as they reached deeper water, a head count revealed that Tan’s six-year-old daughter Dzung had been left sleeping on the shore. They returned to fetch her and the voyage began. On board were Tan’s pregnant wife Tuyet, 27, their other infants Dao and Mo, and relatives, friends and neighbours.

With gold and cash hidden about the vessel, Tu Do outpaced the notorious Gulf of Thailand pirates who preyed on boat people. Turned away from one port in Malaysia, the group managed to land in Mersing, where eight exhausted passengers were permitted to disembark as refugees. After a month, and unsuccessful approaches to US Embassy officials, Tan bought more supplies and sailed for Australia with his remaining 30 passengers. Off Flores in Indonesia they rescued another Vietnamese refugee boat which had run aground and towed it across the Timor Sea, landing near Darwin on 21 November. Tan had navigated 6,000 kilometres from Vietnam to Australia using a simple compass and a map torn from the lid of a school desk, demonstrating extraordinary courage and ingenuity.

The Lu family was transferred to Wacol Migrant Centre in Brisbane, where Tuyet gave birth to a son Quoc. While at Wacol, Tan arranged to sell Tu Do, and was charged import duty. The ANMM acquired the boat in 1990, extensively overhauled it and replaced planking as required (more than 80 per cent of the original timber survives). Tu Do is one of just three refugee boats held in Australian museum collections, and the only one that is floating and operational. It provides museum visitors with a powerful insight into the nature of refugee journeys and their enduring impact on individual lives. Reflecting on her own journey, Tuyet says:

When I think about leaving Vietnam I’m still scared. There were storms and many times waves as big as Tu Do crashing down and I thought, ‘That’s the end of it’. To leave Vietnam was a big risk but now I see the future for my children is much better.