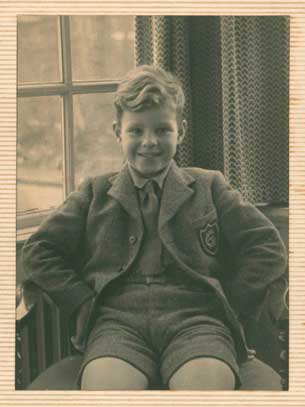 Rob Davids was 13 years old when he migrated from Holland to Australia with his mother Maria and two younger brothers in 1952. The family travelled on the Nederland liner MS Johan van Oldenbarnevelt which docked at No 7 Wharf Pyrmont in Sydney in September 1952.

Rob’s father David Davids was Jewish. In 1942 David divorced his wife Maria to protect her from Nazi persecution. He was smuggled across the English Channel in a small fishing boat and worked for the Dutch Government in exile for the duration of World War II. David was a so-called ‘Engelandvaarder’ (a group of Dutch men and women who escaped occupied Holland to fight against the Axis powers) and received the Bronze Cross in the Order of Oranje-Nassau from Her Majesty Queen Wilhelmina.

Rob and his brothers stayed with their mother in Holland during the German occupation, moving from place to place. During the war, Maria was forced to fend for herself and moved several times after the Germans requisitioned her home. In 1942 the family lived in Santpoort near Haarlem in northern Holland. Rob later discovered that his mother was hiding Jews in her garage. As a child he recalls tailing German troops as they marched through the streets, and listening to a British news station on a secret radio concealed in a cupboard at home.

To England and Indonesia

After liberation, David returned to Holland and remarried Maria. The Davids family lived for a period on a farm in northern Holland, before migrating to East Surrey in the UK. In 1949, seeking a better life, the family migrated to Jakarta, Indonesia, where David tried to establish a small business machines company. When the business failed to take off and political turmoil escalated in the lead up to Indonesian independence, David migrated to Sydney.

Maria and her three children returned to Holland, packed up their house, and followed David to Sydney in 1952. Rob did not want to leave and has vivid memories of bidding farewell to his grandparents from the wharf in Amsterdam. He packed his violin and ice skates for the voyage on Johan van Oldenbarnevelt, which he cherished as nostalgic reminders of his life in Holland. The ice skates hint at Rob’s expectations – and misconceptions – of life in Australia.