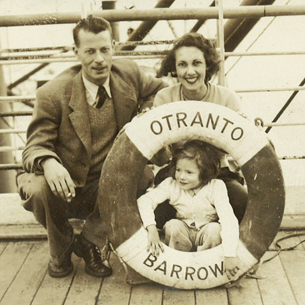 From the 1940s to the early 70s Australia promoted itself as a young country of opportunity in need of new skills and labour. One Australian Government scheme subsidised British migrants, charging them only £10 for their passage to a new home in Australia.

Norman ‘Vic’ Hoiles, his wife Enid and daughter Vandra were one family that took a chance and sailed to Australia as ‘ten-pound Poms’.

Vic met the love of his life, Enid, as a teenager living in the town of Gravesend, in Kent, England in the 1930s. Then only a few years later in 1939 Europe plunged into World War 2 and like many young men, Vic enlisted.

Vic, who had initially joined the Home Guard, was soon attracted to the RAF. Enid also joined the RAF and worked in the office of the local base.

The first time Vic was shot down, he was piloting a Beaufort bomber while stationed in Cairo. He crashed in the desert, right onto a German land mine, but amazingly Vic survived. Later Vic was flying a Beaufighter over Malta and the Mediterranean, attacking capital warships with torpedoes, when he lost an engine to enemy fire. The plane crashed into the sea when its other engine failed and Vic was once again lucky to survive, although the navigator was killed.

During Vic’s tumultuous war years he and Enid were married, and had their first child, Vandra, in 1946. Leaving the RAF at the end of the war, Vic gained work, but was still unsettled and the after-effects of war, such as food rationing, were still in place.

Through a local cricket team, the Hoiles met a young couple who were considering the move to Australia. Together they decided to try their chance in a new country and take up the offer of assisted passage to a nation promoted for its climate, space and employment opportunities.

On 4 May 1950 the Hoiles family sailed from England aboard the RMS Otranto. After arriving in Sydney, they travelled to Tamworth in regional New South Wales to work on the turkey farm owned and run by their sponsor. Shortly afterwards they moved to Bullaburra in the Blue Mountains, west of Sydney.

The isolation of this small community proved a trial for Enid, now at home with two children after a son was born in Australia. To help combat the isolation the family once again relocated, this time to bustling Sydney where Vic soon found work as an architect of war-service homes.

At the age of 39 Vic was diagnosed with bowel cancer, which at that time was almost certainly fatal. But with the knack of survival that had been with him during the war, Vic recovered after having specialist surgery at Prince Henry Hospital – one of the first of its type performed successfully in Australia.

Both children of Vic and Enid enjoyed successes that reinforced the parents’ decision to uproot their lives and move to Australia – as it did for so many migrants.

Did you know between 1945 and 1972 over one million migrants from the British Isles arrived in Australia as ‘ten-pound Poms’?