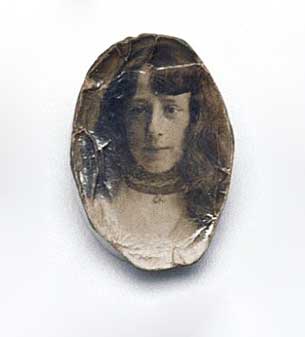 In 1909 eight-year-old Lily Knapton and her mother departed Liverpool, England, on the White Star liner SS Runic. They were migrating to Australia to join Lily’s father, who was working as a tailor in Melbourne, Victoria.

Lily packed her favourite toys to play with on Runic, including a child hand-puppet, a miniature tea set and a delightful pair of Japanese celluloid dolls. The dolls – delicately painted and finely dressed – represent the type of toys available to little girls in the early decades of the 20th century. Knitting needles, balls of wool, patterns and an unfinished embroidered pillowcase helped Lily pass the time, while a simple rope quoit and ball made by a sailor on Runic also kept her entertained during the eight-week voyage to Australia.

Runic carried British migrants on a regular service from Liverpool to Sydney from 1901, the same year the Immigration Restriction Act was passed by Australia’s new Federal Parliament. The Act placed certain restrictions on immigration and reflected the government’s desire to build a white Australia. The government’s preference was for British immigrants and it offered cheap fares to attract them to Australia. Many Britons, including Lily’s father, saw emigration as a chance to find work and establish a new life for their family.

The ANMM collection includes a series of books from Lily’s schooling in England and Australia over a 10-year period from 1907–17. Copy books and drawing books from Lily’s early school days contain arithmetic tables and handwriting exercises in elegant cursive script, while exercise books from her later studies in Australia include lessons on hygiene and housewifery.

The schoolbooks span a pivotal period in Lily’s life and reveal fascinating details about social conditions, education and gender roles in the British Empire at the turn of the 20th century. Lily treasured these books, as well as her childhood toys, all her life as mementos of her homeland, her voyage on Runic and her subsequent settlement in Australia. They provide a rare insight into the nature of childhood and children’s journeys from Britain in the early 1900s.