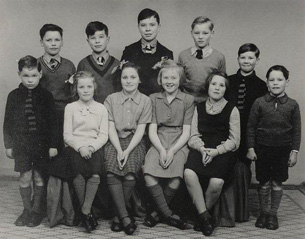 Eva Warhurst (née Reid) was the sixth of a family that would grow to 18 children. The Reid family subsisted on the small wage of their miner father and help provided by extended family.

To ease the financial burden of a large family it was agreed that Eva, aged 10, along with one sister and three brothers were to be sent to Australia as part of the British child migration schemes operating at the time. The children departed Southampton on 31 March 1950 and arrived in Sydney on 19 May. After a medical check, the children were placed on a train to Molong, 300 kilometres west of Sydney, and arrived the following day at Fairbridge Farm School.

The farm was organised into children’s cottages, each with a dozen children managed by a cottage mother. The fairly self-contained farm had a dining hall and kitchen, principal’s house, cottage hospital, staff quarters, a chapel, laundry, wood shed and yards containing a dairy, piggery and chicken coop.

Eva remembers with fondness her childhood at Fairbridge Farm and her connection with the Fairbridge Family – a term used to describe the hundreds of children who passed through the farm. For Eva life was tough but fair; discipline was enforced but treats and rewards were also dealt out.

Eva excelled at hockey and was selected for the Far West girls’ team that played against the visiting 1956 World Champions and runners-up, Holland and Scotland.

At the age of 17, Fairbridge staff helped Eva to find her first job with Woolworths in Orange. Then, in 1965 Eva met her future husband Ralph while working for the Red Cross in the Blue Mountains. In 1966 Eva moved to Melbourne to work as a nurse and Ralph followed. Later, when Ralph was employed as a safety instructor for Telecom and had to travel around the state, the couple bought a caravan and spent a wonderful time travelling together with their young son Ian.

Following Eva’s marriage, her mother and father came out to visit their children in Australia. Her father liked to credit the Australian children’s success to his decision to send them to the other side of the world – defensively, perhaps. Eva prefers attributing it to their own hard work. Eva has visited England three times since the early 1980s; she always pleased to return to Australia and feels she has won the jackpot in life.

By 1966 government policies had changed and no more children were sent to Molong.

Did you know from the 1860s, more than 100,000 children were sent from Britain to Canada, Australia and other Commonwealth countries through child migration schemes?

This is an amended version of 'Living Fairbridge's dream' by Veronica Kooyman, featured in Signals No. 99, Jun-Aug 2012.

Image above: Eva Reid (seated far left, next to her sister Isabel) in the 'Fairbridge party' who migrated on Largs Bay in 1950. Standing are brothers Lawrence and Gordon (at left) and Jim (far right). Photograph courtesy of Eva and Jim Reid.