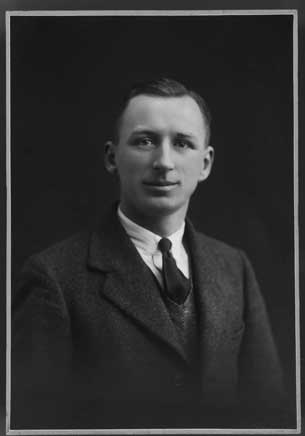 Charles Scott grew up in the midst of World War 1. In the aftermath of the war, there were few suitable jobs available, especially for boys, so he applied to migrate to Australia with the Dreadnought Scheme for youth migrants. Charles selected Australia over other places as he was very fond of cricket. Unfortunately, he said, 'On arrival and afterwards I never saw a cricket ball.'

Charles sailed from London on the Aberdeen liner TSS Euripides in January 1924. His passenger contract ticket shows he paid £33 for the third class passage. He was 18 years old at the time.

On arrival in Sydney, Charles was taken to the Dreadnought Scheme's training farm Scheyville (near Windsor, New South Wales) with a group of 'public school fellows who like myself could not get a job with prospects.' Established in 1911, the Dreadnought Scheme, like the later Big Brother Movement, recruited British youths to be trained on Australian farms and to help populate Australia's wide open spaces with young people of British stock. The boys were provided with six months farm training at Scheyville to adapt to Australian conditions.

Charles left Scheyville before the standard six month period as he was given a train ticket to Warialda in northwestern NSW and told to report to a Mr McInnes at Bingara. When he arrived Charles found he had not been expected there and contacted the Dreadnought office in Sydney, who in turn gave him another address for a Mr McDonald at Little Plain near Inverell in northern NSW.

With Mr McDonald's son, Charles was required to run the farm – a very primitive affair. Charles said, 'My bed was a trestle camp bed affair in a dirt floor shed with a Hessian partition that made a pretence of some privacy. My wages were £1 per week and keep. I stayed there long enough to get my train fare somewhere.'

Charles wrote to one of the boys he had met on Euripides, who eventually got him a job on a wheat and sheep farm near Binya, which 'was heaven after Little Plain. Beds with sheets, a bath or a shower. Clothes washed by housekeeper and adequate food and the usual wage of £2 per week to start.'

Charles worked various jobs in NSW and Queensland until receiving word that his mother was ill at home in England. Charles said:

The poor dear had written to me every week and sent to me the Weekly Sketch without fail all the time I was away. I could see that a depression was coming on, and having received (unusual) a letter from my father explaining all this and that he could have a little influence with Mr F Pick of London Transport he might be able to put in a word for me. Would I come home? I gave this some thought and could see no future for me here. I decided to do this, so on the 24th May, 1930 I sailed from Sydney to home.