In December 1945 the US government relaxed its visa restrictions, giving those brides already married to US servicemen exemption from the visa requirements. It would be some time before the courtesy was extended to fiancées. 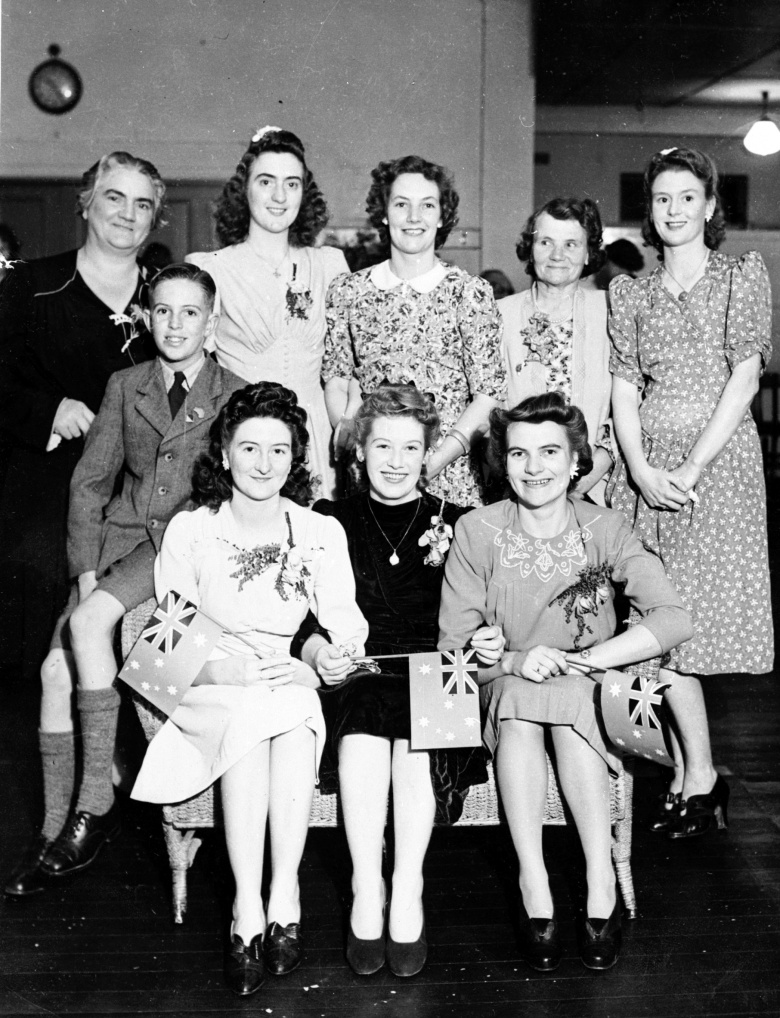 The next task was to secure transport. Not an easy task when commercial vessels had been put to work at the disposal of the military. One-time luxury liners had been transformed into troop-ships for the duration of the war. These were now re-furbished to accommodate the passage of Australian war brides to the USA in a US government initiative known as “Operation War Bride”. But getting a place on one of the “bride ships” was rarely straight forward.

Many women had to wait months, and even years before they were able to re-join their husbands. Mavis Forbes didn’t receive word from the US consulate until 18 months after Del’s departure. Married in December 1944, Del had returned to the US only days later. He completed all of the forms required from America and eventually Mavis boarded SS LURLINE in March 1946.

Adelie Hurley also travelled on SS LURLINE, but she managed to gain passage relatively quickly due to connections she’d made with US officials in her capacity as a photo journalist. For most the wait was a long one though. Audrey Capuano knitted her famous stars and stripes jumper whilst waiting for her passage on SS MONTEREY in 1946.

For some the bride ships were simply not an option. Norma Little was unable to gain passage because she was five months pregnant at the time. She was desperate to reunite with Lloyd, and to have her baby born in America. Fearing that it would be simply too difficult to leave if her child was born in Australia, she organised private transport on an English freighter, the CITY OF DURHAM. While the majority of war brides sailed to the US on a bride ship, Norma’s story reveals that in some cases there were alternative means of transport.

‘It was very exciting to be going on this wonderful ship, the “Monterey”. I was so excited. I really didn’t think about leaving home. All I could think of was how exciting it was going to be to go to this fabulous country…’– Joan Heim

For many Australian war brides the journey started long before they reached their ship. Travelling from all over Australia, brides had to make their way to a designated port of departure in Sydney, Newcastle or Brisbane. This may mean a long journey on a bride train. The train from Perth to Sydney was known as the “Perth Perambulator” because it carried so many mothers and babies. Others travelled from Melbourne and Adelaide, not as far as Perth, but the start of what would be a very long journey. 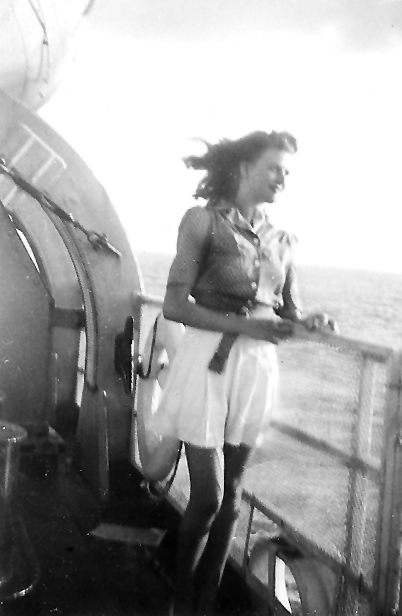 Most of Australia’s war brides would never have travelled outside Australia when they boarded a bride ship. Leaving family and friends was difficult enough, and many had no idea of when they might be able to return. One bride remembers thinking “…will I or won’t I” before boarding her ship. It was also not uncommon for women to remark that they had given little thought to leaving Australia until the time actually came.

Those who left prior to August 1945, talk of strict conditions on board, blackouts on deck and long voyages as they zig-zagged their way through the Pacific trying to avoid Japanese radar. Donna Caldwell waited 9 months for passage on the SS LURLINE but was still among the first to leave. That was June 1945. When she looked back in 1991 she wondered how she ever took her baby across the sea during wartime.

Most of the bride ships departed after August 1945 when the war in the Pacific was finally over. One bride who sailed in 1946 remembers activities on board such as craft classes, movies and a concert. Others recall etiquette classes and specifically being taught how to hold cutlery in the American style. Another tradition upheld on the bride ships was that of “crossing the line”. For those who had not yet crossed the equator by sea all manner of initiation rituals awaited them. Once on the other side of the equator many ships stopped in Hawaii, but the brides were not allowed to go into town, staying on the wharf instead where there was entertainment including Hula girls. 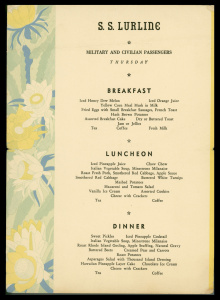 For many women the task of looking after their babies took most of their time. Joan Heim found herself alone with her baby for the first time, but recalls that the girls in her cabin all helped one another. There were three girls and three babies in a twelve-berth cabin, and they had their own bathroom.

Donna Caldwell was also one of three in her cabin. She’d never seen anything so pretty as the mother-of-pearl bathroom in her cabin. There were nurseries on board for looking after the babies while their mothers went to the dining room, and many women talked of how magnificent the food was on board. After years of wartime shortages and rationing the dining room must have seemed heaven-sent.

Such luxury was not reported by everyone. Adelie Hurley recalls being “packed in like sardines”. With all of the bunks occupied in her cabin, securing a place was difficult. Cramped conditions, seasickness among both women and babies, endless nappies and sea-water baths made hygiene a challenge.

But it was on arrival in America, adjusting to a peacetime marriage, a new family and a new country, that the journey really began for the Australian war brides.

Adelie talks about the strick conditions on board (35″)

Adelie talks about bath time on the SS Lurline (55″)

You look back and wonder how your brain ticked (58″)

We held the streamers until they broke (1’20)

Mavis talks about getting on the SS Lurline (1’10)

Life in the USA & Australia