Australians really couldn’t avoid the American presence during the Pacific Campaign, especially in a town like Brisbane where the population of young, eligible men exploded overnight.

Even in the bigger cities like Sydney and Melbourne it was hard to miss these handsome young men in uniform. Nightclubs like the Trocadero, Romanos and Princes played big band music and were popular places to dance. And of course the craze the Americans brought with them was the Jitterbug.

‘They were everywhere… it was a big thing for us to see them because they were all so smartly dressed in their uniforms.’

In Sydney the foyer of the Hotel Australia, known as the “Snake Pit” was a well-known pick-up spot, while in Melbourne the Allied Services Club, the “Dug-Out”, offered enlisted men a home away from home.

But many women met their future fiancés and husbands in simpler settings; on the street, at work, or even at home where their parents were busily doing their patriotic duty and making a Yank feel at home. 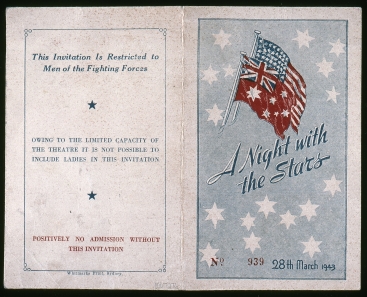 Norma Murray met Lloyd Little when he came to her workplace to deliver a letter from another admirer. Likewise Mavis Dean met her future husband at work, but in this case she was one of the many Australian women who had taken up the increased job opportunities and better wages the Americans brought with them. Mavis had enlisted in the WRANS and was assigned to work for the US Navy Intelligence Service in Melbourne, but it was some time before Del Forbes convinced her to go out on a date. When he finally won her over it was the promise of Artie Shaw tickets that proved too good to pass up.

Joan and Ted Heim met at a dance at the Marrickville Town Hall. Joan had been forbidden to even talk to Americans, so when Ted asked her to the movies she had no intention of going. Something changed her mind, but then of course came the time to introduce Ted to her parents. 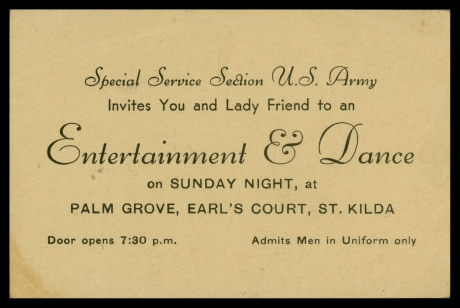 Courtship usually began with a visit to the girl’s parents. Approvals were not always forthcoming, but for many, courtship involved simple pleasures including family dinners, picnics and outings. When Norma brought Lloyd home she was appalled by her mother’s comments about his lovely blue eyes, but the rule in the house was “if you meet an American, bring him home”.

Many American servicemen were pleased for the opportunity for a home cooked meal. With rationing in place this was not always as easy as it seemed. One woman talked of her mother spending close to a month’s rations on a single dinner for her American beau. But Americans came with their advantages too. Not only did they spend their high wages on dinners, flowers and taxis, but they also had access to goods such as ice cream, condensed milk and chocolate, things that Australians had learned to live without.

Favorite outings in Sydney included a trip to Manly by ferry or a visit to Taronga Zoo. Dances remained popular in every major city, with many organised by the Red Cross or by the American regiments themselves.Donna Caldwell remembered dressing up in an evening gown for the Second Camp HQ and Camp Company annual ball and she kept the gardenia corsage Joe gave her to wear to the dance at the 651 Club.

Adelie talks about her first dance with an American (1’08 )

Betty talks about where she met John Gones (2’27)

Betty talks about dances at the Trocodero (1’07)