A proposal usually meant the need for parental consent, but in wartime Australia, to marry a GI also meant mountains of military paperwork, interviews and background checks.

Following a spate of early divorces, the US Military was keen to discourage cross-cultural marriages by any means possible. In the second half of 1942 a “cooling off” period was introduced, so that servicemen applying to marry had to wait three to six months, then re-submit their application before final approval could be made.

Betty Gones remembers her interview at the US Quartermaster’s office in Martin Place. She took her father with her, and was horrified by the question of whether she and John “had to” get married. Joan Heim didn’t realise it would be so difficult to get permission, while Donna and Joe Caldwell went ahead and married without official US sanction. 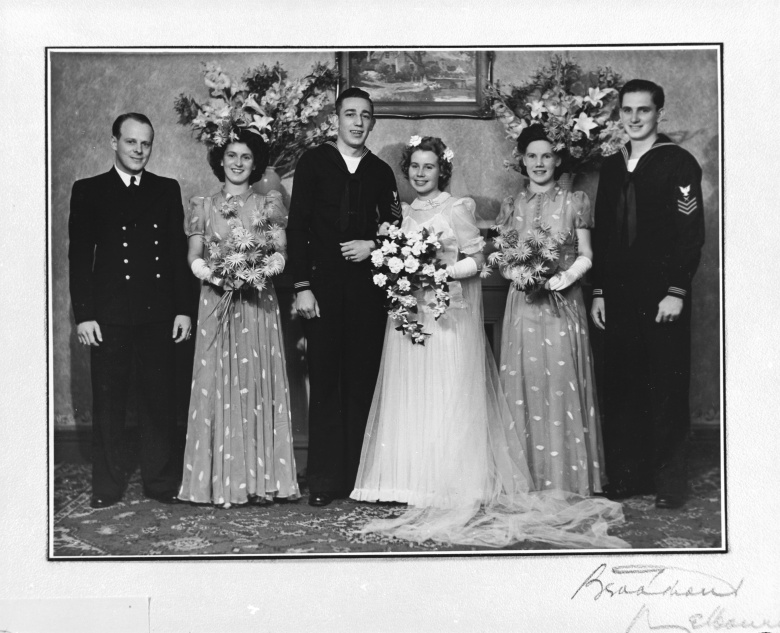 For Mavis Dean, her work with the WRANS put her in a good position as Del’s Commanding Officer (CO) knew her and was in favour of the marriage. Nevertheless, Del still had to wait out the mandatory six months to resubmit his application, which in turn had to be approved by the Fleet Commander. But things began to look better for the Allies in the Pacific and US troops were progressing further north to the Philippines and on to Japan. Del was given orders to transfer to Hawaii just two weeks shy of the completion of his waiting period. Luckily Del’s CO delayed his transfer orders until permission came through, but when it finally did there was little time to organise the wedding. 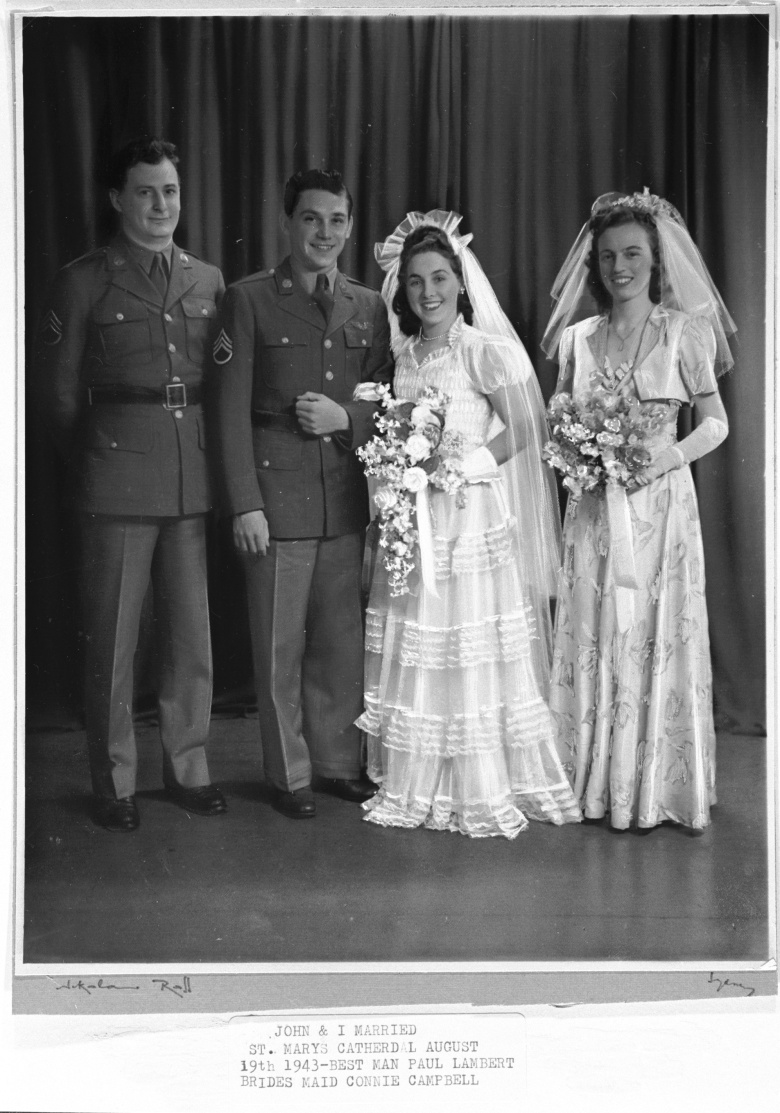 Del’s permission to marry came through at 8am on Sunday 10 December 1944. He was due to ship out at 8am that Thursday. Frantic preparations followed and amazingly Mavis and her family were able to organise the entire wedding in one day. Mavis and Del were married on the Monday 11 December in St Kilda. Not only did they manage to find a venue, but even the bridesmaids had matching dresses, albeit made of curtain fabric.

The “make-do” wedding was a common feature of marriage to a GI. Betty Gones recalls wearing a bridal gown borrowed from a cousin, while Joan Heim’s wedding was made possible by the help of family and friends. Rationing also had an impact on weddings. Joan’s mother made her wedding cake with produce bought on coupons, while Norma Little had her wedding dress made, but had to pay eight coupons for her shoes.

Many US service men were only in town for short periods of time, a fact that added to the hasty nature of many weddings. As MacArthur and his troops moved further north, it became increasingly difficult to get leave in Sydney and Melbourne.Lloyd Little was stationed in Port Moresby when permission came through to marry Norma. He only arrived in Sydney the day before the wedding, and then he was sick with jaundice. Norma comments that he was “yellow as a banana”, a shade not complemented by his khaki uniform, but the black and white photographs of the day show a handsome young couple. 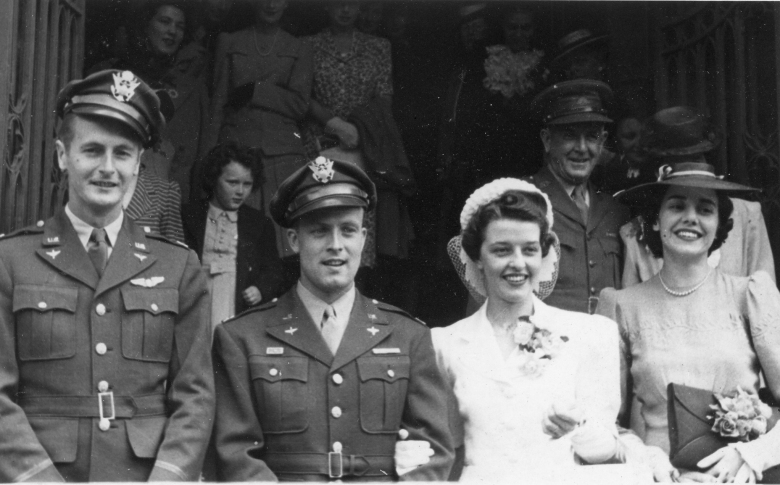 The next challenge was to find somewhere for a honeymoon. It was difficult to find accommodation during the war years, and with many hotels occupied by US troops, rooms were scarce. Many couples borrowed flats from friends for a few fleeting days, while those lucky enough to find a hotel faced the challenge of proving they were married. Betty Gones’ father booked a room for her and John at the Wentworth Hotel, but they wouldn’t accept the couple until they produced a marriage certificate. Likewise at the Hotel Cecil, Norma Little needed her father to attest to her marriage.

For many US war brides, life as a married woman was a solitary experience. Many men, like Del Forbes, had to ship out almost immediately after a brief honeymoon. John Gones flew north the day after his wedding to Betty, but he was able to visit her on a few occasions, always sending flowers in advance of his leave. Betty, a keen dancer, was accompanied to the Trocadero nightclub by her parents in her husband’s absence. After a three-day honeymoon at the Jenolyn Caves in November 1944, Ted Heim reported for duty and within months he was on his way home. It was April 1946 before Joan was able to gain passage to the USA. 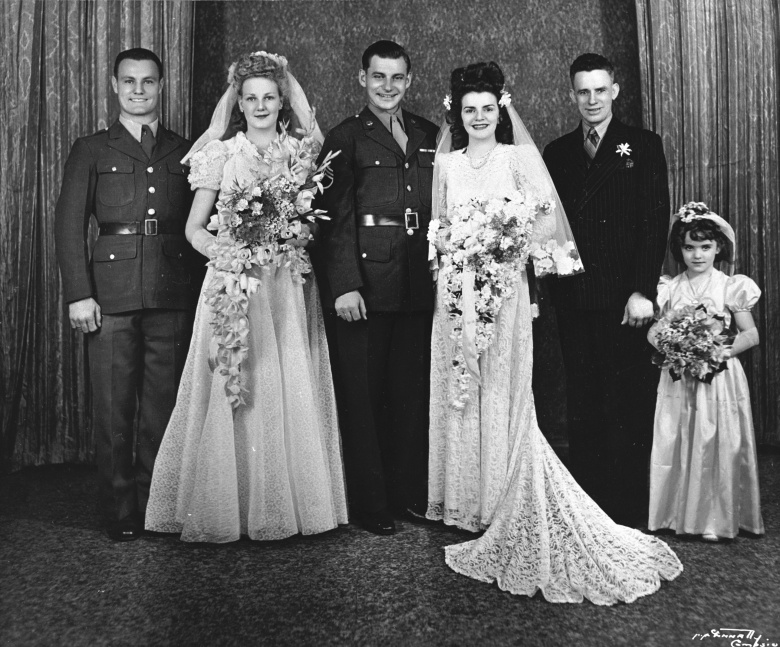 Betty talks about getting permission to get married (1’15)

Betty describes her wedding and honeymoon (1’26)

Joan talks about her wedding arrangements during rationing (1’46)

Joan talks about her interview at the American Consulate (59″)

Mavis talks about the six month “colling off” period (1’52)

My bridesmaid’s dresses were made out of curtain material… (47″)