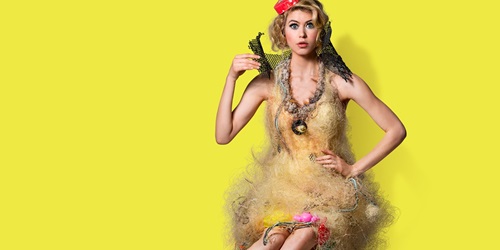 Art and activism for the oceans.


The International Union for Conservation of Nature states that at least 8 million tons of plastic ends up in the world’s oceans every year. The Ellen MacArthur Foundation, in partnership with the World Economic Forum predicts that by 2050 plastics in the ocean will outweigh fish.

These figures were estimated before the current global pandemic, which has only exacerbated the problem. COVID-19 has meant that many reusable items and modern methods of recycling have been abandoned in favour of single-use, non-recyclable items in a desperate attempt to reduce person-to-person contact. These include plastic bags, plastic cutlery and single-use coffee cups – many of which will end up in our oceans.

Items of personal protective equipment (PPE), including disposable facemasks, latex gloves and hand sanitiser bottles, have already been spotted on our beaches and shores.

The work of Australian based ‘art-ivist’ (art activist) Marina DeBris provides a unique method for communicating the harm that we are causing our oceans.

Her obsession with collecting rubbish began after moving to Los Angeles. Her daily runs along Venice Beach were always interrupted by an instinct to stop and collect rubbish to maintain the beach’s beauty. After realising that her efforts were achieving little in the grander picture of ocean pollution, Marina turned to art to raise awareness and demonstrate just how little of what we use is being reused or recycled.

‘Trashion’ is one method that Marina uses to convey this message. Her wearable pieces look like high-end fashion but closer inspection reveals a far more sinister truth. Marina’s trashion collection, titled Beach Couture: A haute mess, is made entirely of the rubbish that she has collected on and near the beaches of Sydney and Los Angeles. Marina uses a fusion of humour and creativity and communicates to audiences that the waste we create will come back to haunt us.

The Inconvenience Store that Marina created also represents a unique method for encouraging audiences to question their use of single-use plastics. This installation mimics the content and setup of a typical convenience store, but with repackaged items that have washed up onto beaches. Here, audiences are confronted with familiar items that they themselves have likely bought and discarded, such as sunglasses, water bottles, thongs and fishing gear, to name a few.

The Inconvenience Store has travelled around Australia and featured at Sculpture by the Sea in 2017, where it won three awards.

Marina’s trashion and Inconvenience Store force audiences to come face to face with the single-use items that we use daily and often discard without a second thought. It reminds audiences that we are the problem but we can also be the solution by changing our habits. Her work reminds us that many of the single-use plastics that we use are optional and that the harm that they can cause the environment far outweighs the short-term convenience that they can offer us.

Beach Couture, featuring photography, trashion and the Inconvenience Store, is showing at the Australian National Maritime Museum until 18 April 2021.

Image: A Captive Audience wearable art by Marina DeBris. Photo by Richard Flynn. The outfit is made from netting found by Captain Charles Moore in the Pacific Garbage Patch, modelled by Hannah Kat Jones