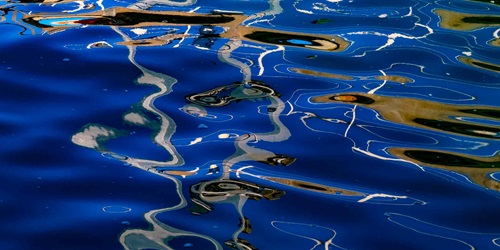 For a very limited run, The Art of Navy - an intimate exhibit of original photographic works by internationally recognised Australian artist Ralph Kerle – will show at the Australian National Maritime Museum this spring. This is the first time the exhibition has been publicly shown.

The exhibition will be launched on 9th October alongside the official launch of the Museum’s newly acquired, Navy decommissioned Tiger Seahawk helicopter, which has just been installed high in the Navy Gallery ceiling space. The Art of Navy will run for the month of October, and seeks to challenge traditional perceptions of the Royal Australian Navy (RAN) by offering up peaceful, meditative, abstract yet natural reflections of RAN vessels in Sydney Harbour.

After a battle with depression, Kerle found solace and healing in the natural world, specifically in kayaking through Middle Harbour in Sydney. “These photographs represent for me how the power of physical movement in kayaking and the movements on the surface of the water can synthesize to act as creative inspiration freeing the mind of mental darkness to heal, recharge and inspire the inner self,” explains Kerle.

The award winning multimedia and photographic artist was commissioned by the RAN in early 2019 to apply his innovative digital photographic technique to capturing reflections on the surface of the water of ships of the fleet in the waters of Sydney Harbour.

“In the same way, I hope each image will challenge established impressions of our Navy, which has changed dramatically from times past. We remain an enduring presence, but the images invite the visitor to consider for themselves what Navy stands for in these challenging times.”

Australian National Maritime Museum Director Kevin Sumption PSM comments: “The Navy’s role in society is rapidly changing, and it’s our responsibility, and privilege, as a maritime museum to preserve and make available for the public, this diverse and dynamic evolution.”

Since commencing his reflections on water series, Ralph Kerle’s work has achieved international recognition and has been the subject of exhibitions in Berlin, Germany (2017), Lisbon, Portugal (2015), Riga, Latvia (2015) as well as galleries in Melbourne (2016) and Sydney.

Kerle's art practice creates work that is abstract and impressionistic yet anchored in the natural environment. His images are not photoshopped or artificially created. They are images that nature has created and exist in reality. They are designed as peaceful meditations on the way we engage with the environment in which we live and how we think, see and communicate our sense of “being” in it.

In The Art of Navy exhibition, he asks the question "how might we think differently about the world of the Navy?”