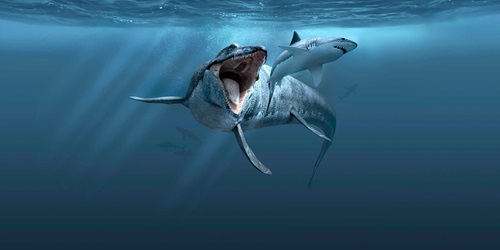 The Australian National Maritime Museum’s latest exhibition is enough to give Jaws nightmares.

Millions of years ago while dinosaurs ruled the land, giant reptiles over 20 metres long hunted the depths of the sea – and they’re coming back to life this summer at the Maritime Museum.

For young and old - Sea Monsters: Prehistoric Ocean Predators opens to the public on Thursday 26 September and brings together never-before-seen real fossils from millions of years ago, gigantic life-sized casts from real specimens, including a 13m long Elasmosaurus and 9m Prognathdon, immersive multimedia, and hands on interactives to raise from the dead these ancient monsters of the deep.

The exhibition will be the first time a huge 1.4 metre Kronosaurus jaw has been on public display, and joins incredible specimens such as an ichthyosaur giving birth and a 5 metre long fish that died after swallowing another fish whole.

Teaming up with one of the world’s leading sea monster experts, palaeontologist Dr Espen Knutsen, and three kid curators – featuring over 70 exhibits, the Museum has created the most fascinating, hands-on and interactive sea monsters exhibition in the last 250 million years.

Dr Knutsen has worked closely with the Museum to curate the latest science on marine reptiles: “This new exhibition tells the fascinating story of these long-gone sea creatures - which have no living relatives - through the latest science and amazing fossils from Australia and around the world. It has been an absolute privilege to be involved in making this part of Earth's prehistoric heritage available to the general public.”

Museum Director Kevin Sumption is a prominent advocate for the role of ‘play’ in museums, and discusses the unique decision to have children as curators: “There is something about “the deep” and “prehistoric monsters” that sparks imagination and brings out your inner child.

It’s a fantastic link to have kids tell sea monster stories from their own perspectives. Children naturally fill in the gaps where knowledge escapes them or wonder overtakes them. While science gives us some pieces of the puzzle of what took place millions of years ago, there’s still a lot we don’t know – and that’s where we are inviting your imagination to flourish, as you design your own sea monsters and see if they have what it takes to survive in the ancient oceans where everyone was a predator.”

Not for the faint hearted – Sea Monsters opens this September, tickets on sale now.

Seriously Scary Sea Monster Facts
1. Marine reptiles originally evolved on land and then went back to the sea
2. The biggest marine reptile was the 24m Shonisaurus, a type of ichthyosaur
3. Australia’s top plesiosaur predator, the Kronosaurus had a bite force of 3 tonnes – more than a saltwater crocodile.
4. The mosasaur Prognathodon’s head was so heavy; if it had lived on land, it couldn’t have lifted it.
5. We found the first sea monster fossils about 50 years before we found any dinosaurs - we’ve known about them for around 250 years.
6. Sea monsters ruled the oceans for over 180 million years (modern human have only been around for about 300,000 years).
7. Some ichthyosaurs could swim at speeds of 40 kilometres per hour.
8. Some Australian sea monster fossils have become stunning and valuable opals.
9. We can learn about what sea monsters ate by looking at their fossilised poo, called coprolites.
10. The plesiosaur Albertonectes had 72 neck bones – more than any other animal. We have only seven.

Sea Monsters 3D - A Prehistoric Adventure
Can't get enough of Sea Monsters? Extend your exhibition experience with a screening of this exciting 3D film from the award-winning team at National Geographic. Eighty million years ago, the American Midwest lay under a great inland sea where colossal creatures ruled the waves. From giraffe-necked Styxosaurus and sea birds with teeth to the T-Rex of the ocean — the 40-foot super-predator Tylosaurus — these wondrous beasts defy imagination. In a remarkable journey, National Geographic immerses audiences in this unexplored world of the “other dinosaurs,” delivering the fascinating science behind what we know and a vision of history’s grandest ocean creatures brought to life in spectacular 3D.
Watch the trailer: https://youtu.be/GlsNM_b9tXQ