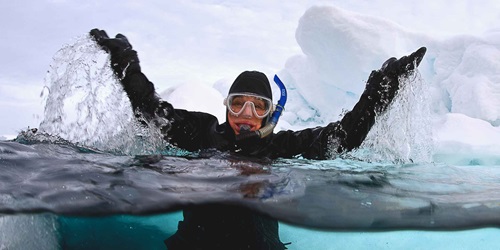 Experience a night of stunning imagery and lively conversation when legendary oceanographer Dr Sylvia Earle, marine scientist Professor Emma Johnston AO and multi-award-winning international nature photographer Michael Aw share fascinating stories from the field and their hopes for the future of the world’s oceans: State of our Oceans with Sylvia Earle.


Australia is an island nation, surrounded by some of the most biologically and ecologically diverse marine environments in the world. Our economic and social survival is inexplicably linked to the health of the seas that surround us. From rubbish to run off, human impact is having an effect on the long term protection and management of these irreplaceable environments and the resources they provide.

For one night only, the Australian National Maritime Museum offers a front seat to current scientific research and observations on what is actually happening out there in the big blue, what we can expect for the future, and what you can do about it.

“The most important thing for people to know about the governance of the Arctic is that we have a chance now to act to maintain the integrity of the system or to lose it. To lose it means that we will dismember the vital systems that make the Arctic work. It’s not just a cost to the people who live there. It’s a cost to all people everywhere,” comments Dr Sylvia Earle.

"It is the worst of times, but it is the best of times because we still have a chance. Our past, our present, and whatever remains of our future, absolutely depend on what we do now." 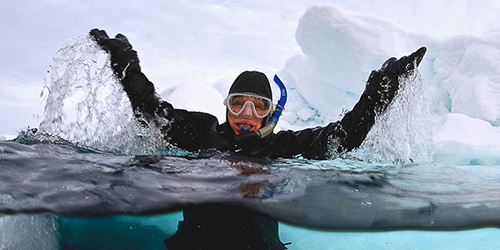 This talk is part of the Museum’s Science Week and Sydney Science Festival program and is made possible thanks to the Department of Industry, Innovation & Science.

State of our Oceans with Sylvia Earle is on Tuesday 13 August at 7pm. To book tickets head to: www.sea.museum/state-of-the-oceans

“Human impact on the ocean is increasing every year. Global climate change and acidification reduce ocean productivity, overdevelopment and pollution contaminate the sea, and an increasing demand for food causes over-harvesting of the world's fisheries. Addressing these issues requires a combination of exploration and quantitative analysis to understand the underlying processes controlling diversity and productivity of ocean life,” comments Michael Aw.

Elysium Arctic also records the devastating impact of climate change in the earth's northernmost regions. Michael Aw believes that art can inspire people to take action against climate change and save some of the most vulnerable places on earth.

The exhibition is free to view in the forecourt of the Museum’s Wharf 7 building. In the sustainable ethos of the exhibition, the fully recyclable forest-like pillars which display the images will be re-used for future free outdoor exhibitions and are powered by solar lighting for evening viewing.

This exhibition is proudly sponsored by Aurora Expeditions who were part of this trip and are experts in Arctic adventure cruising. You can enter to win an Arctic Cruise for two valued at over $20,000 on board Aurora Expedition’s West Greenland Explorer. Visit www.sea.museum/win

“There is still time to choose whether the next century will be shared by people and polar bears.  Within this beautiful Elysium collection, there are reasons for hope for the future of both,” concludes Dr Earle.

Interview opportunities:
All speakers available to interview by request.

Please join us for the media launch of Elysium Arctic on Tuesday 13 August 5pm as Michael Aw and Dr Sylvia Earle uncover the Museum’s newest exhibition. Both Sylvia and Michael will be available to take questions and conduct filming and photo opps.

For media passes to State of our Oceans with Sylvia Earle, please email media@sea.museum

Notes to the editor:

World-renowned oceanographer and explorer Dr. Sylvia Earle has spent her entire life studying and advocating for our world’s precious marine ecosystems. She set and holds the world record for the deepest dive in an untethered submersible, she was the first female chief scientist of NOAA (National Oceanic and Atmospheric Administration), and she was named Time Magazine’s first “Hero for the Planet”. Fondly referred to as ‘Her Deepness’, she has led over 100 expeditions and logged more than 7,000 hours underwater. She has authored more than 200 publications and lectured in 90 countries. Dr. Earle is also the founder of Mission Blue, SEAlliance and Deep Ocean Exploration and Research. Her more than 100 honours include the 2013 National Geographic Hubbard Medal, 2009 TED Prize, Netherlands Order of the Golden Ark and medals from the Explorers Club, the Royal Geographical Society, and the Lindbergh Foundation. Earle is a National Geographic Explorer-in-Residence and honorary chair of Ocean Geographic Board of Honorary Editors.

Professor Emma Johnston AO is Dean of Science and Professor of Marine Ecology and Ecotoxicology at UNSW Sydney. Emma investigates the ecological impacts of human activities in marine ecosystems. She combines the disciplines of ecology, ecotoxicology and invasion biology in a research program that expands our fundamental understanding of marine systems.  Her research is conducted in diverse field environments, from Antarctica to the Great Barrier Reef and temperate Australian estuaries.

Her awards include the Royal Society of New South Wales Clark Medal in Zoology in 2018, the Australian Academy of Science’s inaugural Nancy Mill’s Medal for Women in Science 2014, and the 2015 Eureka Prize for the public communication of science. Last year she was made an Officer of the Order of Australia (OA) for “distinguished service to higher education, particularly to marine ecology and ecotoxicology, as an academic, researcher and administrator, and to scientific institutes”.

Emma represents more than 70,000 scientists and technologists as President of Science & Technology Australia (STA) is a Director on the Board of the Great Barrier Reef Marine Park Authority (GBRMPA) and Acting Chair of the Australian Antarctic Foundation (ASF).  She consults with industry through the development and implementation of new biomonitoring techniques and environmental monitoring programs and frequently contributes expert opinion to state, federal & international government agencies.  Emma is also a highly sought-after science communicator and television presenter for the ongoing BBC/Foxtel series, Coast Australia and ABC Catalyst.

Michael Aw is a multi-award-winning wildlife photographer, explorer and conservationist. He has authored 36 books on ocean life, has won more than 66 international photographic awards and has been named one of the world’s most influential nature photographers by Outdoor Photography.

He has been published by BBC Wildlife, GEO, National Geographic, the Smithsonian, Nature, Ocean Geographic, Asian Geographic, Nature Focus, Times, and Discovery to name a few. Michael is recipient of four awards from the Natural History Museum Wildlife Photographer of the Year Wildlife Competition in 2000, 2010, and in 2006 and 2015 he won the underwater photography category.

During 2010-2016 Michael was the project director for the Elysium Epic expedition to the Antarctic and Arctic with 66 team members comprising the world’s best image makers and scientists. In 2018 he led a team of 50 on an expedition across the heart of the Coral Triangle, for a first-ever baseline survey of the biomass of corals and fishes in the region.