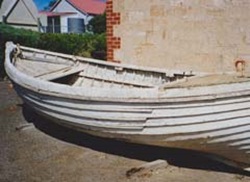 The Australian National Maritime Museum, on behalf of the Australian Government, is pleased to announce that it has awarded over $125,000 to support projects to promote Australia’s maritime heritage. The successful recipients of the Maritime Museums of Australia Project Support Scheme will help, collect, conserve and display objects of historical significance.

The scheme provides grants of up to $10,000, internships and in-kind support from Australian National Maritime Museum experts, which includes support for staff and volunteers from regional and remote organisations, to learn how to develop educational and public programs that help promote Australia’s maritime collections.
Maritime museums and historical societies play an important role in preserving and sharing Australia’s maritime heritage and these grants will ensure important maritime objects are available now for future generations.

In 2016-17, funding was awarded to 22 organisations, in-kind support was offered to four organisations and internships were offered to three applicants.
Museum director, Kevin Sumption, said, “As a national institution our mandate is to share Australia’s maritime history with people across the country and we are proud that the Maritime Museums of Australia Support Scheme is one of the key ways in which we fulfil this charter.”

Funding will support museums and historical societies to share their stories by embracing new technology including apps to share the history of the famous Cape Byron Lighthouse (NSW), shipwrecks of Rottnest Island (WA) and the Duyfken replica as it voyages to commemorate 400th anniversary Dirk Hartog’s encounter with Australia (WA).

Grants will also support interactive projects including the production of new interpretive signage at Albany’s Historic Whaling Station (WA), signs and QR codes to interpret the history of Lake Mulwala (VIC) and the design and installation of story boards by Greater Taree City Council (NSW) to commemorate the Manning River Traders and the importance of the river for industry and trade.

The scheme which offers funding to non-profit museums, historical societies and organisations is supported by the Australian Government and is administered by the Australian National Maritime Museum. The next round of funding will be open for applications in February 2017.

For more information about the Maritime Museums of Australia Scheme and a full list of grant recipients visit www.anmm.gov.au/get-involved/grants-and-awards/funding-for-maritime-heritage.

The Australian National Maritime Museum in Sydney is the national centre for maritime collections, exhibitions, research and archaeology. As a Commonwealth cultural institution the museum is committed to fulfilling its national mandate by developing programs and opportunities to share its expertise, collection and the national maritime story with regional communities throughout Australia.