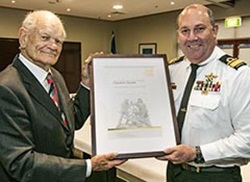 The Australian National Maritime Museum is proud to announce that it’s Council has today honoured one of its most valued supporters, Rear Admiral Andrew Robertson AO, DSC, RAN (Rtd) by naming him as its inaugural Honorary Fellow in recognition of his thirty years of service and support of the museum.

The Honorary Fellowship, the museum’s highest level of recognition, acknowledges rare individuals of high distinction who have a profound interest in the museum and have made a significant contribution to it. Honorary Fellows receive a variety of benefits including life membership and their name placed on an honour board in the museum.

Rear Admiral Andrew Robertson was born in 1925.  He joined the Royal Australian Navy in 1939 and had a long and illustrious career serving in PNG, the Solomon Islands, Coral Sea and New Hebrides from 1942 to 1944 and in the Mediterranean from 1944 to end of World War II. He was awarded the King's Medal in 1942 and the Distinguished Service Cross for service in the Korean War. He was head of the Australian Defence staff in London and Europe before retiring in 1982.

Rear Admiral Robertson’s impact on the founding of the Australian National Maritime Museum is profound and enduring. He is publicly associated with a report which influenced the Government’s decision to establish the museum, was Deputy Convenor of the museum’s Advisory Committee during its establishment in 1985 and was Deputy Chairman of the Interim Council from 1985 to 1988. He proposed the five key themes for the museum’s permanent exhibitions and drafted a proposed charter for the museum.

As a member of the Advisory Committee and the Interim Council he influenced the museum’s design, legislation, budget and structure, branding, exhibition design and masterplan, education policy, early acquisitions (particularly HMAS Vampire and Ken Warby’s Spirit of Australia). His period on the Interim Council included the construction phase of the museum building.

In April this year the museum unveiled a new two-metre-tall bronze sculpture to honour the contribution made by ‘windjammer sailors’ to the development of Australia. The sculpture was commissioned from a major donation by Rear Admiral Robertson. Located within the cultural precinct on the Pyrmont wharf foreshore between the Australian National Maritime Museum and the Wharf 7 Maritime Heritage Centre, Pyrmont, the sculpture is part of a program to re-energise the area.

Kevin Sumption, museum director, said, “On behalf of the Council and staff of the Australian National Maritime Museum we are delighted to honour Rear Admiral Andrew Robertson by naming him our inaugural Honorary Fellow. Rear Admiral Robertson’s naval career is to be celebrated and as a founding councillor he is a long-time friend and supporter of the museum. He has played an enormous role in making the museum what it is today and we are incredibly grateful for his wonderful contribution to Australian maritime history.”

The Australian National Maritime Museum in Sydney is the national centre for maritime collections, exhibitions, research and archaeology. As a Commonwealth cultural institution the museum is committed to fulfilling its national mandate by developing programs and opportunities to share its expertise, collection and the national maritime story with regional communities throughout Australia.