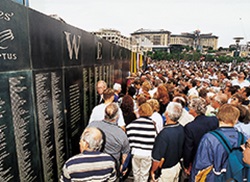 Around 900 people are expected to attend a special ceremony at the Australian National Maritime Museum on Sunday 25 September to see 882 new names unveiled on the museum’s migrant Welcome Wall. The Welcome Wall stands in honour of all those who have migrated from around the world to live in Australia.

Special guest at the unveiling ceremony will be Dr Hari Harinath OAM Chair, Multicultural NSW who will reflect on his own family’s migrant history and the importance of multiculturalism in Australia.

Dr Harinath will be joined by two migrant speakers who have placed names on the wall. Ilse Fait will honour her parents who were Donau Schwaben (ethnic Germans) and migrated from Serbia in the mid-1950s and Lin Hu will share the story of his family’s migration from China in the 1980s.

Australia is a multicultural nation with 44 per cent of its population born overseas or with a parent who was born overseas. The museum’s Welcome Wall is a celebration of this diversity.

Today’s Australians are invited to pay tribute to migrant family members and friends by having their names inscribed on the bronze paneled wall. They can also reflect on a new life downunder by adding their own names.

For each name, people can contribute a brief (150-word) story about the person being honoured to describe their journey. The name appears on the wall and the brief biographical note is available on a kiosk at the museum and on the Welcome Wall website -  www.anmm.gov.au/ww.

The National Maritime Museum considers the arrival of waves of migrants on these shores to be one of the major themes in Australia’s maritime history.  It has built the Welcome Wall on its northern boundary, facing Darling Harbour and Pyrmont Bay where many new settlers arrived.