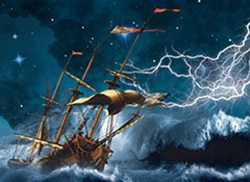 Time is running out for Sydneysiders to discover the extraordinary story of the race to determine longitude at sea in the major exhibition Ships, Clocks & Stars: the Quest for Longitude at the National Maritime Museum, closing 30 October 2016.

Three hundred years ago the Longitude Act of 1714 was passed, leading to maritime history’s greatest scientific breakthrough. The extraordinary story of the race to determine longitude at sea is told in Ships, Clocks & Stars: the Quest for Longitude, a major new exhibition opening at the Australian National Maritime Museum on 5 May 2016.

Developed by Royal Museums Greenwich, the award-winning exhibition draws on the latest research and many rare artefacts to shed new light on the history of longitude and how it changed our understanding of the world.

For hundreds of years, European merchants staked their fortunes on long-distance voyages. Travel at sea was dangerous and safe passage relied on fair weather and effective navigation. Unlike on land, the sea has no fixed points to help mariners determine their position. This could lead to unnecessarily long voyages or the loss of ships, cargo and life. The Longitude Act offered life-changing rewards for a workable solution. Eventually, two solutions emerged: one relied on timekeepers and the other on celestial bodies.

John Harrison has long been considered the hero in the quest for longitude. However, Ships, Clocks & Stars provides a new perspective on this famous tale. Harrison’s marine timekeeper was certainly vital to solving the problem of longitude, but its creation was set against a backdrop of almost unprecedented collaboration and investment. Famous names such as Galileo, Isaac Newton, James Cook and William Bligh all feature in this fascinating and complex history.

Astronomer Royal Nevil Maskelyne’s observations at the Royal Observatory in Greenwich, his work on the Nautical Almanac, and participation in the Board of Longitude demonstrated the complementary nature of astronomical and timekeeper methods of determining longitude. Ultimately, this led to the successful determination of longitude at sea.

Visitors to the exhibition will see several unique artefacts, many never before seen in Australia. These include an engraving of the Longitude Act from the 1700s, stunning replicas of John Harrison’s famous timekeepers H1, H2 and H3, Harrison’s original H4 sea watch, and many other exquisite timepieces dating to the 1600s and 1700s. Additional objects of note include Jacob Aertsz Colom’s celestial globe from the 1600s, original paintings of John Hadley, Galileo Galilei and Captain James Cook, and early navigational instruments.

The exhibition also features items relating to early European presence in Australian waters. These include a pipe, jug and coins from the Vergulde Draeck, a Dutch merchant vessel bound from South Africa to Batavia (modern-day Jakarta, Indonesia) that was shipwrecked off Western Australia in April 1656. A number of objects are associated with Capt. William Bligh, who survived a 47-day, 6,701-kilometre open-boat voyage after being cast adrift by the Bounty mutineers. Items associated with Cook’s second and third voyages of discovery include timekeepers K1 and K3 (made by Larcum Kendall), a sextant, and a ‘dip circle’ (a device used to measure the vertical component of the earth’s magnetic field).

The official publication of the exhibition, Finding Longitude: How clocks and stars helped solve the longitude problem, written by exhibition curators Richard Dunn and Rebekah Higgitt is available from the museum’s store or online at www.store.anmm.gov.au.

The Australian National Maritime Museum is the only place to see this international blockbuster before it ends its tour of three continents in October.