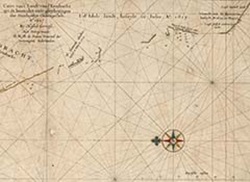 Four hundred years ago, Dutch mariner Dirk Hartog (1580–1621) sailed into history when, on 25 October 1616, he made the first documented European landing on the west coast of Australia. And to celebrate this special anniversary the Australian National Maritime Museum’s iconic rooftop will be illuminated with A chance encounter, a new projection exploring the historic event that would go on to put the west coast of Australia on the map.

Produced in collaboration with the University of Technology Sydney, with funding from the Embassy of the Kingdom of the Netherlands in Canberra, the three minute roof projection follows Hartog and his ship Eendracht as it sets sail from the Netherlands on course for the East Indies.

Part of the Dutch East India Company, Eendracht was on a trading mission when it encountered fierce weather and deviated from its course, eventually arriving at the northern end of Dirk Hartog Island in Shark Bay, Western Australia. The projection goes on to depict how Hartog, having happened upon this new and distant land, raised an inscribed pewter plate – the Hartog Dish - as a testimony of his arrival and departure.

A chance encounter is free, can be viewed from Pyrmont Bridge and around Darling Harbour, and will run nightly from 20 October – 6 November, 8pm – 10pm. Dirk Hartog: An archaeological historical fact lecture - 20 October, 5pm

Also to celebrate the Hartog anniversary the museum will host a lecture – Dirk Hartog: An archaeological historical fact - by Dr Wendy van Duivenvoorde, senior Lecturer in Maritime Archaeology at Flinders University, on Thursday 20 October at 5pm.

Hosted in conjunction with the Netherland Embassy and Consulate-General, Dr van Duivenvoorde will present a talk focusing on ships of exploration and Indiamen, which includes the archaeological remains of Western Australia’s Dutch East Indiamen shipwrecks.

Tickets for the lecture are $20 (members $10). Alternatively guests can choose to attend the lecture combined with the official launch of the rooftop projection, which also includes refreshments on the magnificent HMB Endeavour replica. Tickets are $80 (members $65). For more information and to book visit - www.anmm.gov.au/whats-on/events/dirk-hartog-anniversary.

As Australia’s national institution for maritime history the Australian National Maritime Museum is proud to be a participant in the Dirk Hartog 2016 anniversary activities, highlighting the continued friendship between Australia and the Netherlands.