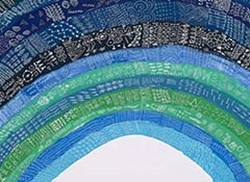 The Koori Arts Expressions 2016 exhibition, a highly imaginative selection of visual artworks created by students from public schools across Sydney, has opened at the Australian National Maritime Museum.

The 90 works created were inspired by this year’s NAIDOC Week theme – Songlines – the living narrative of our nation.

In developing the artworks, students were asked to reflect on the unique connection Aboriginal people have to country and how the achievements of the past inform and further our aspirations and plans for the future. The theme was an opportunity for all Australians to learn more about Songlines and explore those which have created the Country in their region.

Murat Dizdar, Executive Director, Public Schools NSW said: “The annual program aims to develop an understanding of Aboriginal culture and heritage amongst all students. This year’s theme is one of great significance and has resulted in some truly inspirational art. Our students are highly talented and skilled which is reflected in the work they have produced. A real credit to all our students, staff and school leaders involved in this fantastic opportunity.”

Paintings, photography, textiles, sculptures and videos are amongst the diverse works on show. One of the many highlights is the work titled We come from all around the world but live on Aboriginal land by Kindergarten children at Waverly Public School. This collaborative painting depicts Songlines coming across the sea to Australia, demonstrating that none of the children who made the artwork are Aboriginal but they wanted to celebrate that they all now live on Aboriginal land.

Bushland, rivers and suburbia, a collaborative painting by Kindergarten – Year 6 children at Yowie Bay Public School, is an aerial view of the Yowie Bay Surroundings. It demonstrates that students and teachers travel near and far on their journeys to school but are all connected through their school community.

Among the artworks are some that reflect relationships with the sea – the National Maritime Museum’s core theme. In Songs of the Sea, Year 4 children at Clovelly Public School have created their own Songlines by using symbols that represent each of them and their lives. They used the symbol of a wave to show their connection to the beach, which links them all together, and to pay their respect to the coast.

Kevin Sumption, director of the Australian National Maritime Museum said, “We are delighted that the museum can again host such an impressive body of artworks. These young artists must be commended for their interpretation of the significance of the land and sea to Aboriginal and Torres Strait Islander people.”

The Koori Art Expressions 2016 exhibition at the Australian National Maritime Museum is open now, runs until 29 January 2017 and is included in the museum’s Galleries ticket which is free.