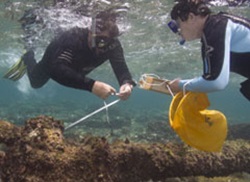 The Australian National Maritime Museum and The Silentworld Foundation* will lead a maritime archaeology expedition to the Coral Sea, departing today from Bundaberg to search for a number of 19th century shipwrecks including the wreck of the brig Bona Vista, lost in 1828 and the barque Jenny Lind, lost in 1850.

The expedition team of 11, including museum maritime archaeologist Dr James Hunter will travel to Kenn Reefs, located more than 500km east of the Australian mainland where they will spend a week searching for the remains of seven ships known to have been wrecked on the isolated reef system in the early to mid-19th century.

Kenn Reefs is part of a submerged geological feature called the Kenn Plateau. The reefs were discovered in 1824 by Alexander Kenn, Master of the ship William Shand, on his way from Sydney to Batavia (modern-day Jakarta, Indonesia).

The reef covers approximately 42 square kilometres, and presented a considerable hazard to ships travelling to India and Asia from Sydney during the first half of the 19th century.

The museum, The Silentworld Foundation and their research partner the Great Barrier Marine Park Authority have undertaken many expeditions to the Coral Sea since 2009 to explore these early trade routes and the role of Indian-built ships in Australia’s early maritime history.

The wooden two-masted brig Bona Vista was on a voyage from Sydney to Mauritius when it wrecked on Keen Reefs in 1828. The ship’s captain Robert Towns and his crew spent eight weeks on the reef waiting for rescue. During this time they built a cutter from the remains of their ship, which they called Hope. They were eventually rescued by a passing vessel and used Hope, under tow, to carry their belongings until it capsized in heavy seas.

The 474 ton, wooden, three-masted barque Jenny Lind was heading to Singapore when it struck Kenn Reefs during heavy weather. All hands managed to get ashore onto one of the sand cays where they created their own water distillation system to provide fresh water while building a small schooner from timbers salvaged from the wreck. They sailed the small boat to Moreton Bay. The expedition team, if time permits, will also look for the remains of the water distillation system on the sand cay.

This is the same dive team that in January 2009, located and identified the government schooner Mermaid wrecked in 1829, 20km south of Cairns and in 2012 found the Royal Charlotte wrecked on Frederick Reef in 1825.

This expedition is a joint project between the Australian National Maritime Museum, The Silentworld Foundation and the Great Barrier Reef Marine Park Authority.

* The Silentworld Foundation is a not-for-profit Foundation established to further Australian maritime archaeology and research, and to improve Australia’s knowledge of its early maritime history.