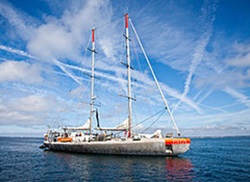 In collaboration with the Australian National Maritime Museum, Tara, the famous French research schooner, will be in Sydney from August 18th to 23rd for a stopover during the Tara Pacific expedition. After departing from Lorient (France) in May 2016, the boat has sailed nearly 50,000 km across the Pacific Ocean to explore corals reefs.

A press conference will be then held aboard at 11:00 am
followed by a boat visit with crew members.


PUBLIC VISITS ON BOARD TARA

August 19th & 20th, from 10am to 12pm, and 2pm to 5pm
Step on board for free public visits with Tara’s crew. Explore the schooner, learn about life and research on board as well as previous expeditions.

Registration is  is essential. For further details and to register visit www.anmm.gov.au/tara

Sunday 20th at 2pm
Learn about the importance of coral reefs, plankton and Tara’s mission in this free event with speakers including the scientists and crew of Tara.
For further details visit www.anmm.gov.au/tara

August 20th - from 1:30 pm to 2:30 pm and 3:30 pm to 4:30 pm
Children can learn to be marine scientists in free hands on workshops in which they will collect and examine plankton from the harbour.

August 18th, 2017 - 11:00 am
Darling Harbour Marina
Medias will be invited aboard to meet researchers
and the Tara crew at arrival, and visit the schooner.

Since 2003, Tara has sailed all the oceans of the globe, undertaking research to understand the impacts of climate and ecological changes to anticipate future crises. In the course of 11 expeditions covering more than 375,000 km, Tara and her scientific partners discovered nearly 100,000 microscopic marine species and millions of new genes. Research carried out by 117 international laboratories, including the CNRS, CEA, EMBL, MIT and PSL, has resulted in more than 120 scientific publications, 9 of them in the most prestigious journals. The schooner has completed the following expeditions: Tara Arctic (2006-2008) drifting in the Arctic ice pack during 507 days, Tara Oceans (2009-2013), revealing 80% of the unknown Ocean microscopic life, Tara Mediterranean (2014) on the impact of micro plastic pollution. Tara is now carrying out the Tara Pacific expedition (2016-2018) to better understand the biodiversity of coral reefs, from the gene to the ecosystem.

Tara’s current expedition Tara Pacific focuses on coral reefs in most of the Pacific Ocean. Coral reef health is crucial for the diversity of species, as well as for mankind. Coral reefs cover less than 0.2% of the oceans' surface, yet they host nearly 30% of known marine biodiversity, Australia is of course a major player with the Great Barrier Reef. An interdisciplinary team of scientists aboard Tara examines the biodiversity and evolution of coral reefs through an innovative approach in the context of major environmental disruptions linked to climate change and increasing stress from human activities.

The main objective of the Tara Pacific’s international team of scientists – biologists, oceanographers and plankton specialists – is to better understand coral communities of microbes, symbiotic algae and viruses through DNA sequencing and to discover the extent of this biodiversity by investigating their capacity to adapt to current global changes. This research is conducted over a very wide geographical area across the largest ocean on the planet. Such an approach has never yet been carried out at this scale.

This expedition is unique in covering such a huge geographic area, but also in focusing research on the internal exchanges between the coral colonies and plankton, as well as the external oceanographic context of the reefs.

SCIENCE AND EDUCATION FOR THE OCEAN

Beginning in 2003, Tara has been a wonderful theater to raise awareness of youth, general public and even policy makers. “I never dreamt that Tara would have achieved so much in the past thirteen years in highlighting the crucial issues of climate change and what is happening to our ocean environment in the twenty-first century,” says Lady Pippa Blake.

From the 18th to the 23rd of August, Tara will be berthed at the Australian National Maritime Museum in Darling Harbour Marina and the Foundation invites the general public aboard. “Sydney will be an opportunity to explain our work, share expertise with the Australian research community and again raise public awareness about the environment, with special attention to youth,” says Romain Troublé, executive director of the Tara Expeditions Foundation.