In a year when the impact of COVID-19 on the shipping industry has been widely publicised, one key object in the National Maritime Collection offers a poignant reminder of the role of seafarers and wharf labourers as essential workers.

"They used to call us 'The Brains Trust'. We used to play chess in the rain periods and smokos and so on. We had a very talented composer, Arnold Butcher … and people who were trying to write and act and all this sort of thing, all in the same gang."

The Sydney Wharfies mural in situ, wrapping around the canteen walls, 1990.

The Sydney Wharfies Mural was painted by waterside workers, commonly known as wharfies, in collaboration with nine artists. The project began as a way to liven up the walls of the workers lunchroom or canteen with some depictions of wharfies involvement in historical events. The canteen at the time, was right in the heart of the busiest docks and wharves in Sydney on the foreshores of Darling Harbour. The eastern shoreline – nowadays full of manicured parklands, restaurants, apartments and a casino at Barangaroo – was once known as the 'Hungry Mile'. It gained this name from when casual waterside labour and the unemployed would tramp along the docks each morning looking for work.

During the first half of the twentieth century, the wharfies had won significant pay and conditions through their strength as part of a trade union – the Waterside Workers Federation (WWF). The canteen wall mural was designed to reflect these struggles and victories. It began small in 1953, but by 1965 had wrapped around almost all the walls of the canteen – traversing doorways and windows. It expanded in scope as well, and positioned the story of the WWF in that of the larger history and politics of other trade unions and charted Australian industrial campaigns from the 1850s up to the Second World War. 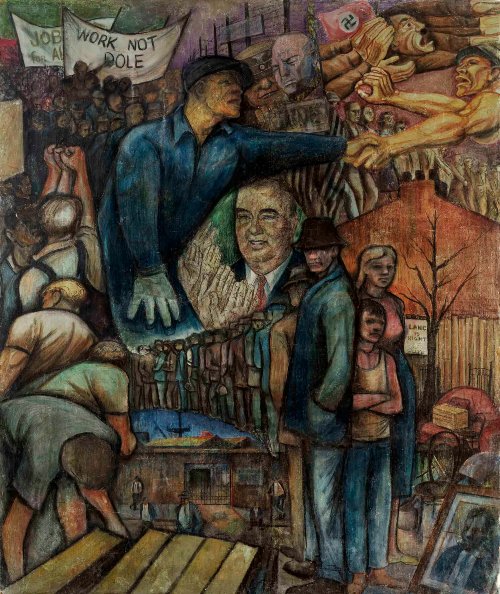 The WWF was formed in 1902 in response to dangerous work conditions maritime workers faced on the waterfront, handling huge amounts of heavy cargo. It became a national trade union under the leadership of future Australian Prime Minister William ‘Billy’ Morris Hughes, who negotiated for an agreement with employers for general uniformity of wages and conditions among shipping companies. The WWF Sydney Branch was subsequently established at 60 Sussex Street in the city.

During the 1950s, Sussex Street became a hive of activity for wharfies, artists, and intellectuals. This mix of workers and artists grew from the benefits granted to wharfies in the post war period – such as overtime limits – and an increase in union membership to 27,000 by 1957. Clem Milward and Harry Reade were two such artists who became wharfies and contributors to the mural. For them, casual employment on the wharves allowed for flexibility to focus on their artistic pursuits – packaged with the socially progressive politics that came as part of being involved in a militant union.

The WWF supported an ideal that encouraged the cultural and artistic self-development of its members – and formed a partnership with the Studio of Realist Art (SORA). This collective championed the artistic movement of socialist realism. Rod Shaw was a founding member of SORA, and it was Shaw that spurred the idea of the Wharfies Mural.

From the 1980s as Sydney Harbour transformed from an industrial port into a residential and tourist one, the wharfies moved to other places such as Port Botany and Wollongong. By the 1990s, when the area known as Patricks’ Wharves was to be redeveloped and the canteen torn down, the wharfies foresightedly decided to somehow keep the mural. It was drawn and painted into the plaster walls of the canteen and removing it was a daunting task. Thankfully, the foresight of the wharfies and their respect for history meant it was preserved for the future.

The mural was painstakingly removed from the walls of the canteen in 1991. It underwent significant conservation – paid for by the Maritime Union of Australia (MUA) – and then was donated to the Australian National Maritime Museum. The Sydney Wharfies Mural is now one of the museum’s most iconic treasures. Today, it is an intriguing window into the cultural movement that occurred among workers on the waterfront during the first half of the twentieth century.

In light of the theme for World Maritime Day 2021 ‘Seafarers: at the core of shipping's future’, the mural stands at the Australian National Maritime Museum as an historic object that continues to raise awareness of seafarers’ crucial and ongoing role in world trade.

Scenes represented in the two panels

View all posts by Dr Stephen Gapps and David O'Sullivan→
Posted in: Arts and Culture
↑