Marine research is set to enter an exciting new phase with the planned installation of scientific research station Proteus™. Marketed as the underwater version of the International Space Station, it is the brainchild of Fabien Cousteau.

Fabien Cousteau learned to dive when he was four years old. When he was 11, he joined his first expedition on board his grandfather Jacques-Yves Cousteau’s vessel Calypso. He has spent almost every day since engaged in increasing our connection to the ocean and fighting for its survival.

In July 2020, he made a stunning announcement. He unveiled plans for Proteus™, a scientific research station marketed as the underwater version of the International Space Station. Concept drawings by renowned architect Yves Béhar show a massive structure – more than four times the size of any previously known submerged habitat, with state-of-the-art research labs, sleeping quarters and a moon pool.

It can house up to 12 inhabitants for extended periods of time and includes the first underwater greenhouse, to produce fresh food at depth. Proteus™ is envisioned to be powered by a combination of wind, solar, and Ocean Thermal Energy Conversion. It will include a full-scale video production facility for documentary production, live links to the surface, and education. A site has been chosen for the $135 million project, at 18 metres water depth in a protected marine reserve within the waters of Curaçao in the Southern Caribbean. Discovery and planning are underway, with the aim of having the full station installed by 2024.

Proteus™ may seem impossible, but the Cousteaus are raised to think, dream and create under water. In 1962, Jacques-Yves Cousteau initiated the Precontinent Project, a multi-year expedition using habitats Conshelf I, II and III that tested the ability to conduct scientific research under water for up to one month, as memorialised in the documentary A World Without Sun (1964). 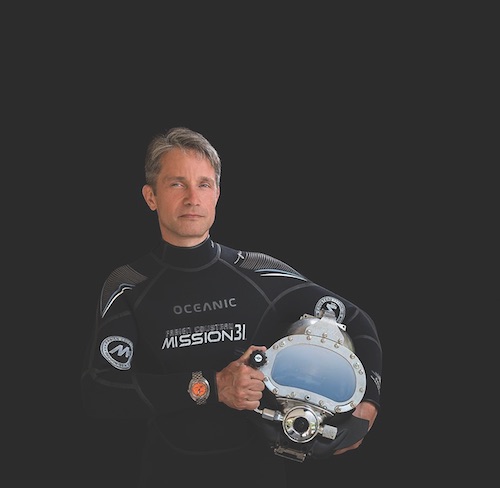 Fabien Cousteau is the grandson of Jacques-Yves Cousteau. In 2016 he founded the not-for-profit Fabien Cousteau Ocean Learning Center, based in New York. Photographer Carrie Vonderhaar

The results of these and other expeditions have provided critical information to the Proteus™ team for incorporating into their plans for the living quarters. Time at depth isn’t easy. Lack of sunlight results in low vitamin D. Voices are affected by circulated air, water doesn’t boil, and after a while, you can’t taste your food. Ear infections are common. Sickness can decimate an entire crew. Aquanauts can also suffer from ‘creeping crud’, a symptom of the almost constant damp that results in rashes and increased acne. After extended periods, pulmonary toxicity is a worry. Not to mention the boredom and isolation. But given the projection that Proteus™ aquanauts will be able to conduct research under water for eight to 12 hours per day, rather than the usual two to three hours on scuba, I’d still bet that most marine scientists will line up for the chance to go.
So, in 2014, Fabien Cousteau led a full lunar cycle (31-day) mission on Aquarius Reef Base, moored in 19 metres of water off Key Largo in the Florida Keys. Operated by Florida Atlantic University, Aquarius Reef Base is currently the only permanent underwater habitat in the world. This mission proved the viability of the Proteus™ concept, as Cousteau reported:1

By and large up until now, scientists have been studying these things by diving down from a boat or by sending an ROV. Those offer very finite moments [of observation]. What we are able to do [on Mission 31] is not only peek through the keyhole to try and figure things out, but also open the door and stick our foot in. We got a taste of what it could be like to really spend quality time at the bottom, and study these things day after day. To get a nice long data set that’s not just a month long, but maybe a year long. That would give us a much better pulse of what’s happening to the oceans.

During this expedition, Cousteau and his team performed three years of equivalent research in a month. It resulted in 12 published scientific studies and 9,800 scientific articles and reached more than 100,000 students via telepresence.2

To be protean – mutable, adaptable – is one of humanity’s greatest strengths. With the Bajau Laut in mind, we may still be centuries away from the physical adaptation of growing gills—but we are capable right now of feats of imagination and skill that can engineer the impossible. We have visionaries like SpaceX to return us to the moon, and we need dreamers like Fabien Cousteau to remind us that there is another world worth exploring here on Earth, a deep ocean world that may be even more vital than space to our continued survival on this planet. As Jacques-Yves Cousteau said, ‘The impossible missions are the only ones which succeed’. I have no doubt that Proteus™ will succeed, and in doing so, will take the next steps towards a new future for humans under water. 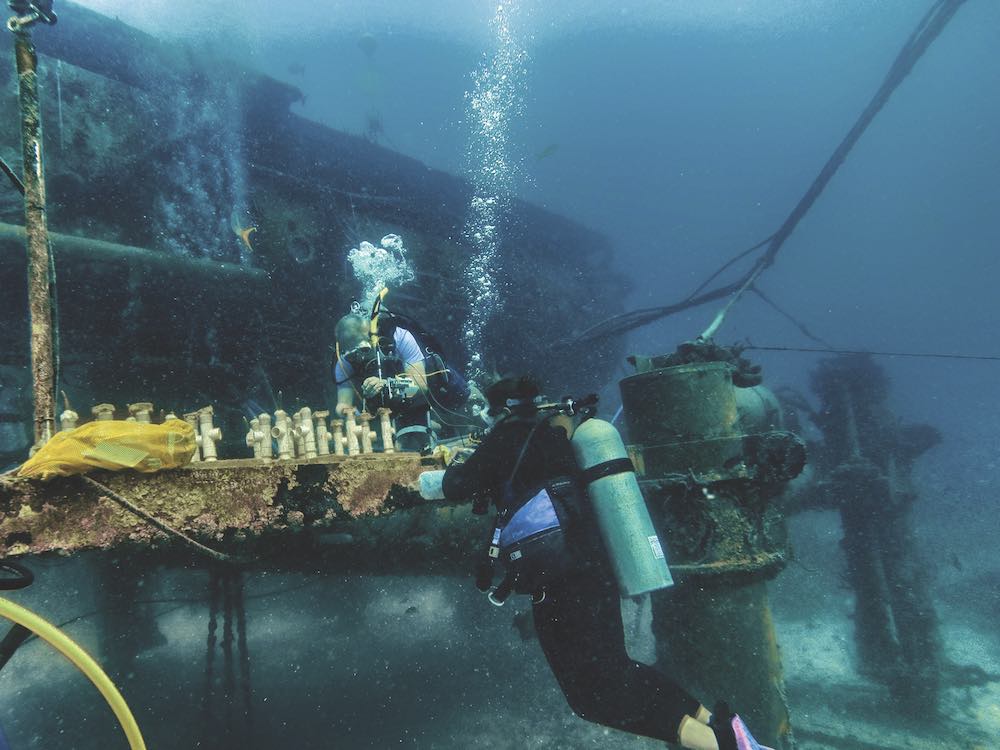 Mark Patterson and Sara Williams probing corals at Aquarius Reef Base, 2014. Operated by Florida Atlantic University, it is currently the only permanent underwater habitat in the world. Cousteau's 31-day mission in 2014 proved the viability of the Protues™ project. Photographer Christopher Marks