There are more than 10,000 objects in the museum’s collection relating to Australia’s rich immigration history. But the museum is also committed to contemporary collecting about immigration. Curator Kim Tao discusses three new acquisitions that explore the art of making through activism and sustainable socially engaged design.

Affixed to a pillar beneath the Western Distributor freeway in the Sydney suburb of Pyrmont, just down the road from the museum, is a striking poster featuring the Indian-born hawker Monga Khan. It’s a poster I stare at every afternoon on the way home, while waiting for the traffic lights to change. Monga Khan is dressed in a suit and turban and gazes, rather defiantly, into the distance in his profile portrait, which has been superimposed with the word ‘AUSSIE’ by Adelaide artist Peter Drew. 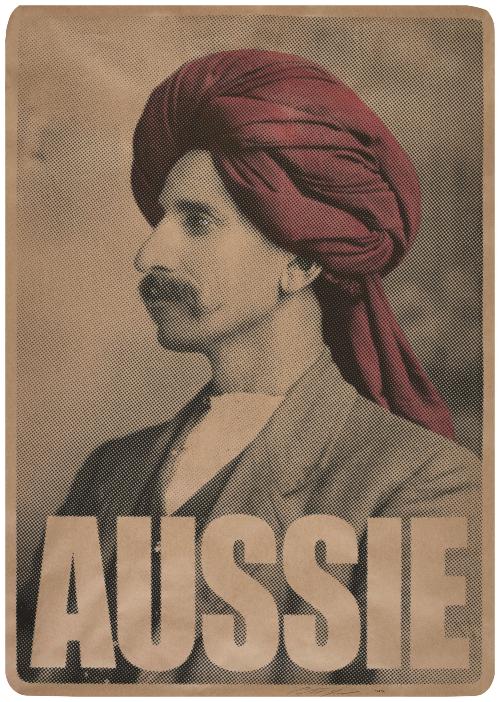 Since 2013, Peter Drew (born 1983) has been making his mark by installing hand-screenprinted posters in public spaces to raise awareness of contemporary issues such as immigration and Australian identity. His ‘Stop the boats’ and ‘Real Australians say welcome’ poster campaigns were a direct comment on the treatment of asylum seekers, but it is his iconic AUSSIE series that has captured the public imagination and provoked conversations about what epitomises a ‘real Australian’. To create the series, Drew mined the vast archive of Certificates of Exemption from the Dictation Test (CEDT) at the National Archives of Australia, which attests to the administration of the White Australia policy during the first half of the 20th century.

After Federation in 1901, the new Commonwealth government passed three pieces of legislation – the Immigration Restriction Act, Pacific Island Labourers Act and Post and Telegraph Act – together known as the White Australia policy. The central tenet was a dictation test that required non-European immigrants to write out a passage of 50 words in any European language (and later, any prescribed language), as dictated by the immigration officer. Since the choice of language was at the discretion of the officer, undesirable immigrants – namely those from Asia and the Pacific Islands – were destined to fail the test. They could then be declared prohibited immigrants and deported.

Non-European residents of Australia wishing to travel overseas temporarily could apply for a CEDT to re-enter the country without needing to sit the dictation test. These certificates of exemption, comprising biographical details and photographs, constitute an extraordinary body of records documenting the movements of thousands of Sikh hawkers, Chinese traders and Afghan cameleers, who were granted special permission to leave and re-enter Australia as their labour was regarded as essential to the nation’s growing economy. They are the faces of the White Australia policy.

Monga Khan, born in India in 1870, was one such exemption. He immigrated to Victoria in 1895 and worked as a hawker around Melbourne, Ballarat, Beaufort and Ararat, as evidenced on his application for a CEDT in 1916. Gladys Sym Choon was another. She was the owner of the China Gift Store in Adelaide’s Rundle Street, which sold exotic oriental goods such as embroidery, lace, lingerie and ornamental china sourced during her regular visits to China and Hong Kong. Although Gladys was born in Adelaide in 1905, and her father was born in the British colony of Hong Kong, she was still required to apply for a CEDT to re-enter Australia in the 1920s.

Drew uses the visually arresting medium of poster art to humanise these marginalised histories and complicate the traditional vision of national identity that dominates both media discourse and Australian folklore. His ‘AUSSIE’ posters restore agency to figures such as Monga Khan and Gladys Sym Choon as survivors of the White Australia policy. As part of the National Maritime Collection, they are an evocative example of poster art as protest art, and the emerging relationship between artists and activists responding to Australia’s changing immigration policies.

From boats to bags

Another recent acquisition, the mimycri rubber backpack, situates the themes of immigration and refugee policy and contemporary socially engaged design in a broader global context. The body of the black and red backpack is constructed from a 100 per cent rubber refugee boat collected on the Greek island of Chios, while the straps are made from car seatbelts. A close look at the material reveals the scars and scratches that bear witness to a compelling story of courage and hope. 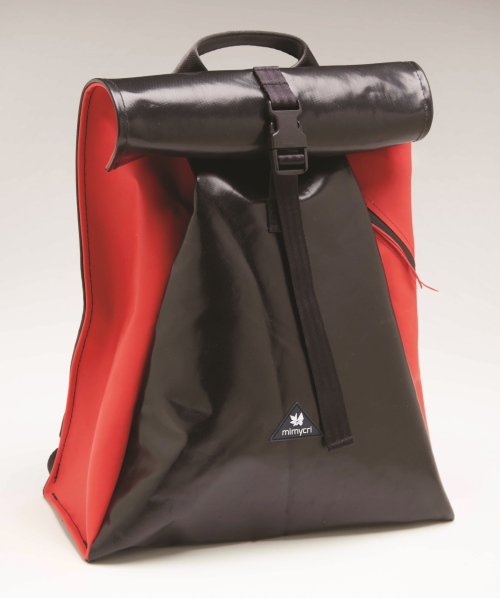 mimycri backpack made from a rubber refugee boat collected on the Greek island of Chios, 2015–17. National Maritime Collection

The backpack was produced by mimycri, a not-for-profit German organisation that fosters collaboration between designers and refugees to upcycle the scraps of history into handcrafted products embedded with meaning. The idea for mimycri was born in Chios, where the organisation’s Berlin-based co-founders Vera Günther and Nora Azzaoui volunteered during the refugee crisis of 2015–16, which saw more than one million people cross the Mediterranean into Europe, primarily from Syria, Afghanistan and Iraq. Günther and Azzaoui’s first-hand experience of this humanitarian crisis motivated them to turn a global challenge into an opportunity to change public perceptions about refugees. As they say:

We are convinced that social and economic participation are key to successful integration. Therefore we work in a diverse team, including newcomers from all around the globe. We also integrate meaningful products into our society and thereby create innovative ways to engage with the topic of migration.

For the museum, luggage, trunks, suitcases and bags have always been defining symbols of the migrant experience. But the concept of a backpack stitched from a broken refugee boat adds a more complex layer to this universal narrative of migration, encompassing notions of baggage – both physical and emotional – carried by migrants and refugees. It also allows the museum to explore the subject of environmental sustainability and the way in which mimycri is helping to reduce waste by reclaiming and repurposing discarded material. The mimycri backpack represents a positive partnership between socially engaged designers and refugees, providing a personal perspective on the global refugee crisis and the power of making history tangible by working together.

This ethos is also embodied in a collection of sealife-print garments recently acquired from The Social Outfit, a Sydney-based ethical trading social enterprise that offers training and work in the fashion industry for those from newly arrived refugee and immigrant backgrounds. Launched in 2014, The Social Outfit aims to empower women and young people to develop skills in clothing production, retail, design and marketing, and to discover employment pathways, while also facilitating their settlement in Sydney through a sense of belonging and purpose. 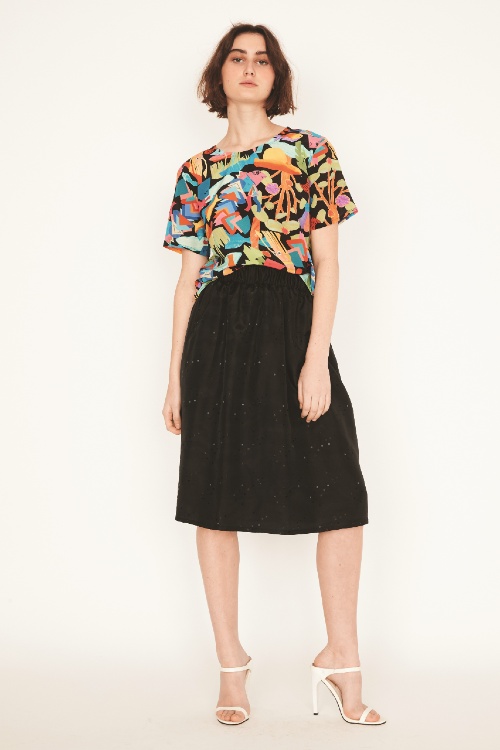 It’s a valid model, considering that many refugees and immigrants arrive in Australia with rich textile traditions, using their skills to make a living as seamstresses, pieceworkers or factory labourers. In recent years, mounting concerns about exploitation, fair wages and safe working conditions have placed a greater focus on ethical production methods. This matter gained notoriety in 2013, when more than 1,100 people died in the collapse of the Dhaka garment factory in Bangladesh, highlighting the detrimental impacts of the fast fashion industry on both producers and the environment.

The Social Outfit is the antithesis of fast fashion. All of their garments are ethically produced in small quantities and sewn onsite in a studio in Newtown, in Sydney’s inner west. The sewing technicians come from a range of cultural backgrounds, including Burmese, Afghan, Iranian and Syrian. For many, it is their first job in Australia. The majority of The Social Outfit’s products are made of deadstock fabric sourced from brands such as Seafolly, Cue, Ginger & Smart, Alice McCall and Carla Zampatti. This practice is key to ensuring a more sustainable and circular economy that prevents excess fabric from ending up in landfill.

Every year, The Social Outfit runs a digital print project to engage with young people from new refugee and immigrant communities in western Sydney. In 2019, they collaborated with 12 students from Fairfield High School Intensive English Centre to create artworks in painting, drawing, weaving and collage. The students’ work was then digitised to produce the sealife-themed ‘Fairfield’ print, which features fish, jellyfish and squid among a vivid backdrop of foliage and blossoms. The pattern appears throughout the Kinetic Bloom collection of women’s tops, dresses and scarves, locally printed on silk using low-impact water-based dyes. Now part of the National Maritime Collection, these eclectic pieces of social fabric reflect the intersection of maritime imagery and migrant enterprise, telling powerful human stories about new arrivals who have made Australia their home.

This article was originally published in Signals 132.