From humble beginnings in the inner-Sydney suburb of Redfern, Tribal Warrior Aboriginal Corporation has grown into Australia’s only maritime training organisation that is fully owned and run by Aboriginal people. It is dedicated to providing better opportunities for Aboriginal and Torres Strait Islander youth and educating the wider community about Australia’s First Peoples.

Sydney Harbour is one of the most recognisable harbours in the world, known for its vibrant blue waterways, beautiful beaches, iconic landmarks and strong boating culture. Thousands of boats ply the harbour: commuter ferries, historic sailing vessels, cruise ships, super yachts and everything in between, but two of these vessels stand out from the rest. Proudly flying large Aboriginal flags and covered in cultural designs, these special craft belong to the Tribal Warrior Aboriginal Corporation (Tribal Warrior), Australia’s only maritime training organisation that is fully owned and run by Aboriginal people. Tribal Warrior also offers cultural tours for national and international visitors, providing a strong reminder of Sydney’s rich Aboriginal heritage and the ongoing connection that First People have to the waters and land around the harbour. 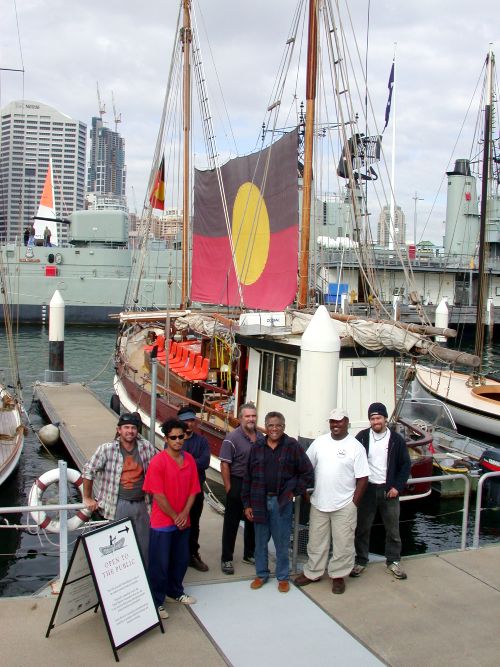 Crew of 'Tribal Warrior' beside the vessel at its mooring at the museum. Image Andrew Frolows

Tribal Warrior had its unlikely beginnings in the inner-city suburb of Redfern, which was well known for its sizeable Aboriginal community; the area had been a cultural hub for Aboriginal people for more than 200 years. In 1998, with ongoing tensions increasing between youth living in the area and local police, a group of elders met with local resident Daniel Ariel. Daniel offered to donate a boat to the community and to provide maritime training for young people. Daniel soon became a founding member of the Aboriginal corporation that would eventually carry the name of the donated boat – Tribal Warrior.

After its life as a pearling lugger, it was wrecked, rebuilt, refitted and then used by the United States Army in World War II before being adopted by the Ganabarr Morning Star Clan, the traditional people of the Gove Peninsula in Arnhem Land, Northern Territory. It passed to the Redfern community in the hope that it would be used to establish courses for young local men, providing them with maritime skills and enough training to enable them to find employment afterwards. Once the program had been developed, proved successful and shown ongoing benefits to the community, the Tribal Warrior Aboriginal Corporation was formed. As a change-of-hands initiation, the corporation invited elders to perform the cultural practice of a smoking ceremony on the vessel to cleanse it and heal past memories.

Shane Phillips is the CEO of Tribal Warrior, and has cultural connections to the Bundjalung, Wonnarua and Bidjigal peoples. Shane grew up in Redfern and was among the second group of boys that Tribal Warrior trained in maritime skills. Shane says, ‘These two old fellows turned up and fed us really cool stuff that made us start to think about things differently’. After completing the training program, Shane became involved in the operation of the company. He realised the opportunities that this program had given him and set out to help other people in the same position. The success of its training programs has enabled the Tribal Warrior Corporation to extend its training of at-risk youth across Australia, and many Aboriginal and Torres Strait Islander skippers have gained employment in the maritime industry both locally and nationally. These programs were developed, and still continue to run today, through self-generated funding.

Tribal Warrior Corporation still uses the gaff-rigged ketch Tribal Warrior for its courses, and the vessel is currently berthed at our museum. They now also own a retired ferry named Mari Nawi, which in the traditional language of the Sydney area means ‘big canoe’. Mari Nawi is very recognisable, with distinctive artwork of a whale on its bow. The whale has been a strong symbol of New South Wales east-coast Aboriginal peoples for many thousands of years, as their Saltwater Songlines attest.

Mari Nawi is used for cultural cruises and corporate charters on Sydney Harbour. Its crew comprises professionals, trainees and cultural educators and performers. The cultural cruises are part of the training program and are intended to teach and promote Aboriginal cultural practices and seamanship. They also aim to clarify common misconceptions about Aboriginal people and their history. These tours emphasise that many Aboriginal people are, and have always been, coastal people. A core component of them is to make visitors aware of Aboriginal people’s relationship to the land and sea and to pass on traditional names of places around the harbour. These cultural cruises attract tourists from all parts of the world. 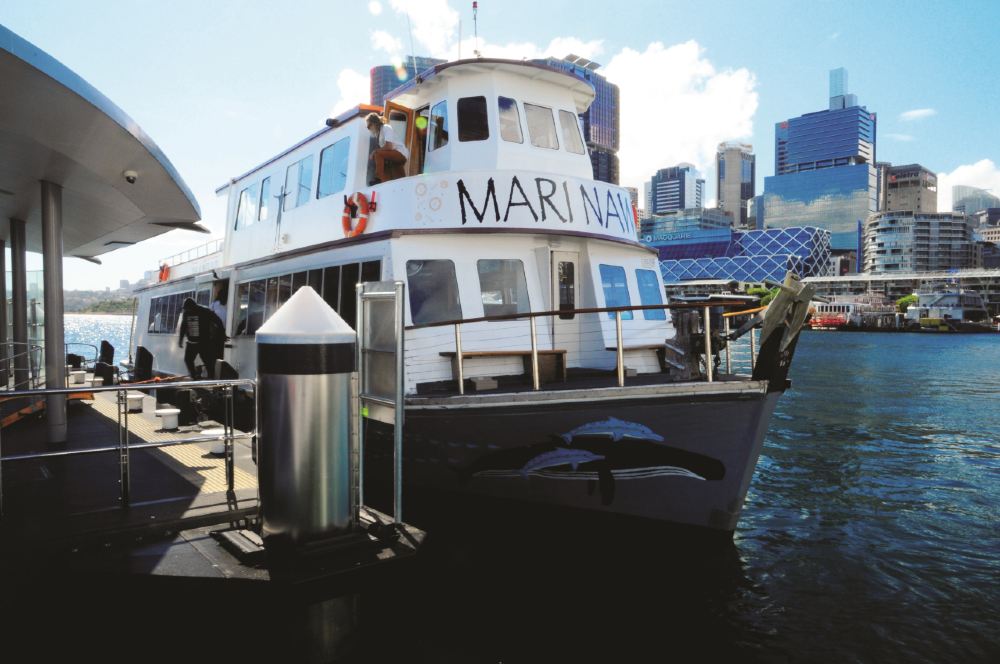 In addition to its training and cultural programs, Tribal Warrior Aboriginal Corporation has actively participated in numerous projects and events throughout Sydney and across Australia. One of the most notable of these came in August 2001, after the corporation had been operating for three years, when a crowd assembled at Cockle Bay Wharf in Sydney to see Tribal Warrior and its crew set off to circumnavigate Australia. Their aim was to encourage Aboriginal communities to become involved with the Tribal Warrior Association by engaging with those they visited and helping to establish a wider network of Aboriginal and Torres Strait Islander maritime training and tourism industries.

Just under two years later, in 2003, Tribal Warrior and its crew arrived back in Sydney Harbour, having sailed more than 25,750 kilometres, becoming the first-ever all-Aboriginal crew to circumnavigate Australia. During the trip, the team visited 120 coastal communities. In each one, gifts were exchanged, and community members engraved words or a work of art significant to their area into the wooden structures of the Tribal Warrior. These engravings can still be seen on the boat today.

The voyage sent a strong message promoting reconciliation, by reconnecting with saltwater traditions and establishing links with communities. For the crew and trainees, the trip was a momentous event and a significant step forward in Tribal Warrior’s maritime activities.

Since the circumnavigation, Tribal Warrior has developed, growing and establishing itself in a number of diverse projects. Their recent participation in the Sydney to Hobart Yacht Race proved to be one of the most difficult challenges they have undertaken. In 2016 the Tribal Warrior team had attempted to make history by entering the famous bluewater event, but they were forced to withdraw just a week before the race when their boat was damaged.

Three years later, the team had raised sufficient funds to take part in the 2019 Sydney to Hobart, aboard a leased racing yacht that was renamed Tribal Warrior for the event. They became the first Aboriginal and Torres Strait Islander crew to participate and officially cross the finish line, in a highly significant moment for the team. Aboriginal crewmember Naomi Cain – the only woman in the team – said, ‘Mother Nature and our Ancestors threw everything possible at us, but we made it here’. The challenging but rewarding experience of participating in this notoriously difficult voyage fulfilled the crew’s aim of encouraging more Aboriginal and Torres Strait Islander people to become involved in sailing. For the crew of Tribal Warrior, completing the race was a cause for celebration that extended to the wider Tribal Warrior community.

This history-making voyage was another positive step on the road towards reconciliation. It provided Tribal Warrior Aboriginal Corporation with further exposure and enabled it to connect and share with other businesses and organisations from across Australia. These connections are essential for the continued operation of Tribal Warrior Corporation and its programs and services, which are largely funded by its cruises, charters and cultural performances, as well as from donations and support from companies, non-government organisations, governments and individuals. 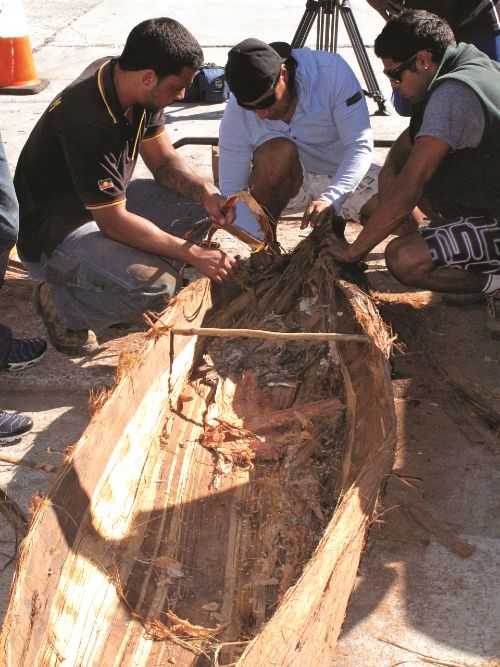 The museum has proudly supported Tribal Warrior in a number of its events and programs. In 2012 and 2017, Tribal Warrior Corporation was heavily involved in the Nawi Conferences hosted by and held at the museum. These explored Australia’s First Peoples watercraft, bringing together traditional watercraft builders, community members, historians, students and others from around the country to study the role, history and importance of the nation’s many and varied traditional watercraft.

Other successful collaborations with Tribal Warrior have been harbour tours for museum visitors aboard Mari Nawi to mark NAIDOC Week, and Science Week tours about Aboriginal and Torres Strait Islander peoples’ navigation by the stars. The museum has also been involved in numerous projects through Tribal Warrior’s mentor program, including building traditional bark canoes with the CEO Shane Phillips and some of the local youth. In 2019 Shane participated in a panel discussion as part of the museum’s Ocean Talks series. Speaking on Aboriginal perspectives of Sydney Harbour, he discussed the different ways in which Tribal Warrior interprets Sydney Harbour’s rich and diverse Aboriginal history, as well as the cultural connections still surviving and thriving today. Engaging with the Tribal Warrior Aboriginal Corporation and working with it on projects and events are steps in the museum’s commitment to supporting Indigenous maritime communities nationally and internationally.

Tribal Warrior’s many programs have opened the barriers of communication between Aboriginal and Torres Strait Islander communities and non-Indigenous people across Sydney’s cultural divide. This modern corporation draws upon a traditional outlook and practice to deliver programs that draw on the strength of Aboriginal identity and relationship with the land and sea. Its iconic vessels, a permanent fixture on Sydney Harbour, express pride in Aboriginal culture.

We look forward to future projects and partnerships with Tribal Warrior. Next time you are in Sydney, look out for Mari Nawi on the harbour, or come and visit the old pearling lugger Tribal Warrior at its mooring at the museum.

This article was originally published in Signals 132

View all posts by Indigenous Programs Unit→
Posted in: Indigenous