The late Henry Lippmann OAM had a long association with this museum, as the driving force behind the Dunera boys’ annual reunions and as founding editor of the Dunera News. Today his legacy is documented across the museum, in our collections and archives and on the Welcome Wall. To mark the 80th anniversary of Dunera's arrival, we look Henry's story and his journey on this infamous voyage.

Heinz (Henry) Lippmann (1921–2004) was one of 100 Jewish schoolboys evacuated from Germany to England just days before the outbreak of World War II. The eldest of two sons born to Leo and Ruth Lippmann, 17-year-old Henry was studying electrical engineering at a Berlin technical school operated by the Jewish Organisation for Rehabilitation and Training (ORT). On 27 August 1939, against a backdrop of escalating Nazi persecution, Henry said goodbye to his parents at Charlottenburg station in west Berlin. They would never meet again. 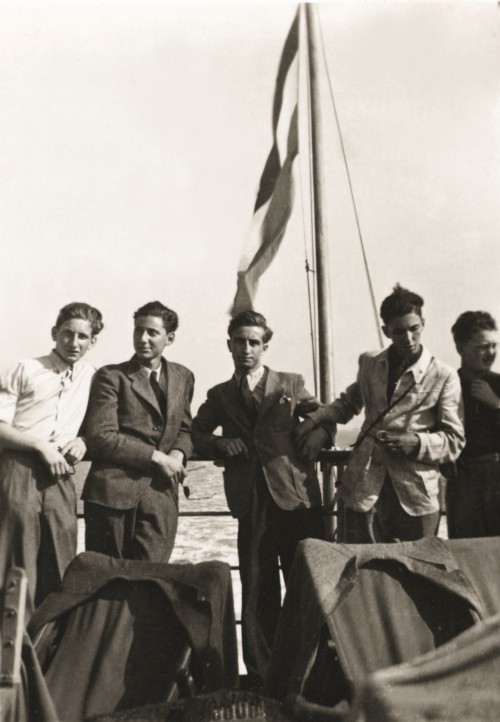 Henry Lippmann (second from left) on board the Dutch ferry 'Queen Emma', crossing from the Hook of Holland to Harwich, England, 1939. ANMM Collection ANMS0219[004], gift from Henry Lippmann

In England, Henry continued his studies at an ORT school in the northern city of Leeds, while the war unfolded in Europe. In June 1940, as France fell to Nazi Germany and Allied soldiers were evacuated from Dunkirk, the British government ordered the internment of all male ‘enemy aliens’ (unnaturalised people born in enemy countries) aged between 16 and 60. This included both long-term residents of Britain as well as more recent refugees fleeing Nazi oppression, all of whom were regarded as potential spies or Nazi sympathisers. The British government also sought to deport its enemy aliens overseas, to curtail their threat to the war effort and the nation’s security.

Henry and around 30 of his ORT classmates were classified as enemy aliens and interned, even though they had lost their German nationality and their sympathies were decidedly on the side of the Allies who had saved their lives. The internees were sent firstly to a small internment camp located in York, in England’s north-east. They were then transferred west to another camp on the Isle of Man, where they spent a few days before being taken to the port of Liverpool to be shipped to Canada.

On 10 July 1940, Henry was among 2,542 internees who embarked from Liverpool on the 12,615-ton Hired Military Transport (HMT) Dunera. Although most of the passengers were German or Austrian Jewish refugees, they were treated as prisoners. Also on board were nearly 500 German and Italian prisoners of war or Nazi sympathisers, some of whom were survivors from the transport ship Arandora Star, which was torpedoed by a German U-boat on 2 July, just hours after departing Liverpool.

HMT Dunera became known as the ‘hell ship’. Before the ship had even left port, the internees were subjected to brutal treatment and humiliation by their poorly trained British military guards. Henry recalled being pushed around by the guards, who stole the internees’ precious possessions and dumped their luggage overboard. Two days into the nightmare voyage, Dunera sustained minor damage after it was struck by a German torpedo in the Irish Sea.

Dunera was dangerously overcrowded and the internees were kept in quarters below deck, with limited access to fresh air or daylight. Conditions were unhygienic, with the putrid stench of vomit, urine and unwashed bodies. The internees suffered from poor rations, inadequate medical care and regular beatings from the British guards. Henry remembered that they were restricted to about 10 minutes of exercise per day, supervised by armed guards carrying bayonets. On one occasion, the guards forced the internees to run over broken glass in bare feet. 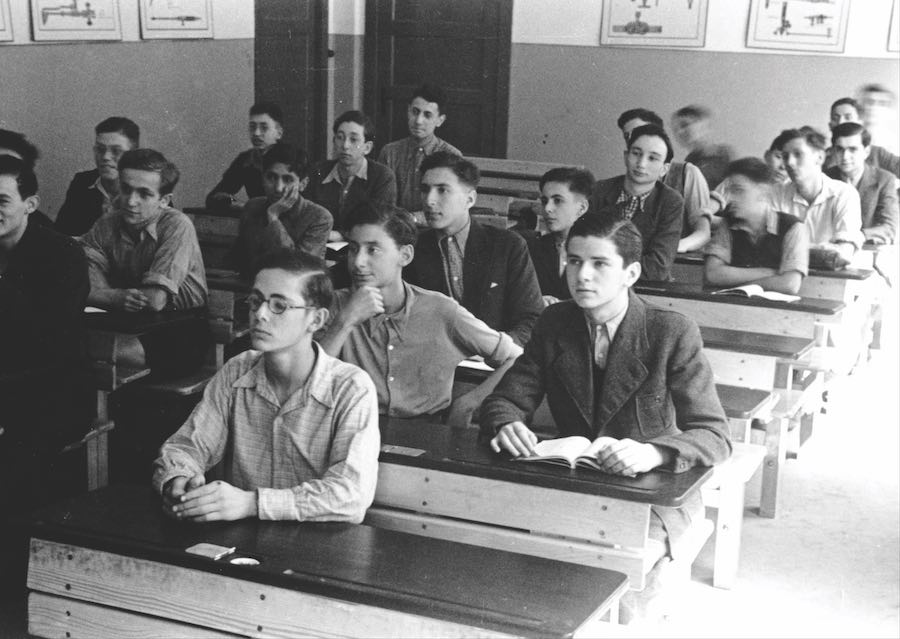 Henry Lippmann (centre, with hand on chin) during a lesson at the Jewish ORT school in Berlin, Germany, c 1939. ANMM Collection ANMS0219[007], gift from Henry Lippmann

Henry recalled that Dunera changed course frequently, which made it difficult to determine if they were tracking north, south, east or west. As the weather became increasingly warmer, and the ship took on provisions on the Gold Coast in West Africa, it was clear that they were not headed for Canada. One of Henry’s most vivid memories was berthing in Cape Town, South Africa, where everyone received an ice-cold Granny Smith apple. Henry savoured the taste of the fruit; many years later he still regarded it as the best apple he had ever eaten in his life.

As Dunera continued its passage across the Indian Ocean, it was apparent to Henry and his fellow internees that they were bound for Australia. On 27 August 1940, the ship docked in Fremantle, Western Australia, where the internees were fingerprinted and issued with identification cards. When Henry went to sign his card, he was surprised to be handed the German-made Montblanc fountain pen that was stolen from him by a guard at the start of the voyage. Sadly he was unable to retrieve the pen, a gift for his bar mitzvah when he turned 13.

Dunera proceeded to Port Melbourne, where around 500 internees disembarked and were taken to the Tatura camp in the Goulburn Valley region of Victoria. After Dunera departed Melbourne, Henry was directed to a small enclosure on deck, behind barbed wire, from where he caught his first glimpse of Sydney Harbour. On 6 September 1940, Dunera docked at Wharf 21 Pyrmont following a gruelling 58-day journey from Liverpool. When Australian medical army officer Alan Frost boarded the ship and witnessed the appalling conditions, he wrote a damning report that sparked vigorous debate in Australia and Britain. The British government later expressed its regret over the Dunera incident and laid charges against a number of the ship’s guards, including the commanding officer, Lieutenant Colonel William Scott.

After their arrival in Sydney’s Darling Harbour, the remaining 1,984 Dunera internees travelled by train to the Riverina town of Hay, in southwestern New South Wales. During the 19-hour journey, Henry remembered seeing kangaroos and bushfires, and being greeted by kind ladies who offered sandwiches and cups of tea as they passed through Mittagong and Goulburn.

In Hay, the internees were assigned to two of the town’s three 1,000-man camps, which were surrounded by triple barbed wire. The camps had 36 wooden huts that could each accommodate 28 men. The Hay camp quickly developed into a model of organised society, with internees governing their own affairs through a parliament comprising elected hut leaders. Every man had a job to do; Henry was the boiler man, responsible for boiling the hot water used for showers and dishwashing.

The internees fostered a lively intellectual and cultural life through lectures, newspapers and a music and theatre group. One of their shows was titled Hay Days are Happy Days, in reference to an ironic song written about the austere conditions and extreme heat in Hay. In May 1941, the internees were transferred to the more temperate climate of Tatura in northern Victoria, following a visit by Major Julian Layton of the British Home Office to arrange for their repatriation.

After the Japanese attacks on Pearl Harbor in December 1941, Major Layton persuaded the Australian government to permit internees to join an employment company of the Australian Military Forces to contribute to the war effort. Around 900 Dunera boys, including Henry, chose to remain in Australia. In January 1942, Henry was released from the Tatura camp and he enlisted in the 8th Australian Employment Company to work in ordnance and supply. He was discharged in September 1946 and three months later became a naturalised British subject.1

Now 24 years old, Henry was eager to begin a new life free from persecution, internment and military service. He returned to Sydney and found a job as a travelling sales agent with John Lewinnek, a pre-war German refugee who worked in the clothing trade. In 1952 Henry married dressmaker Julie Wakil. The couple had two sons, Michael and Ed, and started their own clothing manufacturing business, Florida Fashions. In the 2004 Queen’s Birthday honours Henry was awarded the OAM for his contribution to Australia through his Dunera activities.

When he registered for the 1999 launch of the Welcome Wall, Henry said that he never regretted being deported from England, having played his part as a proud citizen of Australia. Despite his wrongful internment as an enemy alien and his subsequent mistreatment on board Dunera, he always maintained his faith in British democracy and justice. While British wartime Prime Minister Winston Churchill described the Dunera scandal as ‘a deplorable and regrettable mistake’, Henry noted that Britain’s mistakes could never be compared to the atrocities committed by the Nazis in the concentration camps. For years, Henry believed that his parents and younger brother Kurt had died in the Warsaw Ghetto; only in the 1980s did he discover their ultimate fate at the Trawniki concentration camp in Poland.

In an interview with museum curator Helen Trepa in 1995, Henry Lippmann said:

There is tremendous pressure from not knowing, when actually you are alone and homesick. You left your place, you left your country, you left your people and you’re uncertain what happened to them. All that I had was my friends. And we [Dunera] boys, we stuck together, till now. That created a bond of very strong friendship, cause I’ve been together with these boys from Berlin till today. And we still stick together … if you keep on looking at the sad side, if you look only at documents, it’s very miserable. But if you look at what you can really do and how you can pull yourself out of misery, even at the worst possible moments, that is really something you can learn from. Something good can come out of it.

[1] Australians held the status of British subjects until the creation of Australian citizenship through the  Nationality and Citizenship Act 1948.

Honour your family's journey to Australia today by inscribing their name on the Welcome Wall.

This article originally appeared in Signals 132