On this day 51 years ago, HMAS Onslow arrived in Sydney after it was commissioned into the Royal Australian Navy (RAN) on 22 December 1969. Temporarily closed due to COVID-19, we thought it would be a great time to detail some of Onslow’s history highlights for its 51st anniversary.

Commissioned during the Cold War, Onslow is one of six Oberon class submarines that were in part a response to concerns surrounding the expansion of the Soviet Pacific fleet. Launched on 3 December 1968 by Princess Alexandra, Onslow played an important role in helping protect Australia throughout its 30-year service with the RAN.

Onslow clocked up more than 358,000 nautical miles as it participated in various international training exercises and represented Australia on goodwill visits. The silent patroller of the deep also undertook intelligence collection patrols and tracked Soviet submarines moving into the Arabian Gulf from Vladivostok via the Coral Sea and the Great Australian Bight.

The submarine participated in regular training exercises, including fighting fires, hydraulic system ruptures, floods, casualties and electrical failures. These type of exercises helped prepare the submarine for action at any given time.

Onslow also participated in large-scale training exercises both in Australian waters and internationally. For example, during the 1971 Rim of the Pacific Exercise (RIMPAC) with ships from the United States, New Zealand, Australia and Canada, Onslow was struck by a practice torpedo deployed by a US Coast Guard vessel. Lieutenant Commander Ryan said:1

We were submerged, running a couple of hundred feet below. We had been exercising since about 6am in operations involving helicopters and aircraft as well as the ships. All dropped torpedoes. The last one hit us. It just bounced off, making a dent about one half inch deep.

Luckily for Onslow the only damage was a small dent near its stern planes.

The submarine also participated in regular deployments to South-East Asia as part of the Five Power Defence Arrangements (Exercise STARFISH), as well as local military manoeuvres off the Australian east coast, west coast and across the Tasman Sea.

Recollections of life on board

For those who served aboard Onslow, strong memories include the camaraderie, fights over food and learning to live in a constant state of danger. As Gary Oakley who served 22 years in the RAN recalls:2

The submarine’s not even safe when it’s alongside – everything is underwater. So even when you’re not doing anything, every time you go down into that boat, you’re in danger.

The thing that makes submarines the powerful weapon they are is that you can’t see them. You can instantaneously turn a submarine away from collecting intelligence to becoming a weapon of war – it can probably fire its weapons and disappear before anyone even knows exactly where it is. 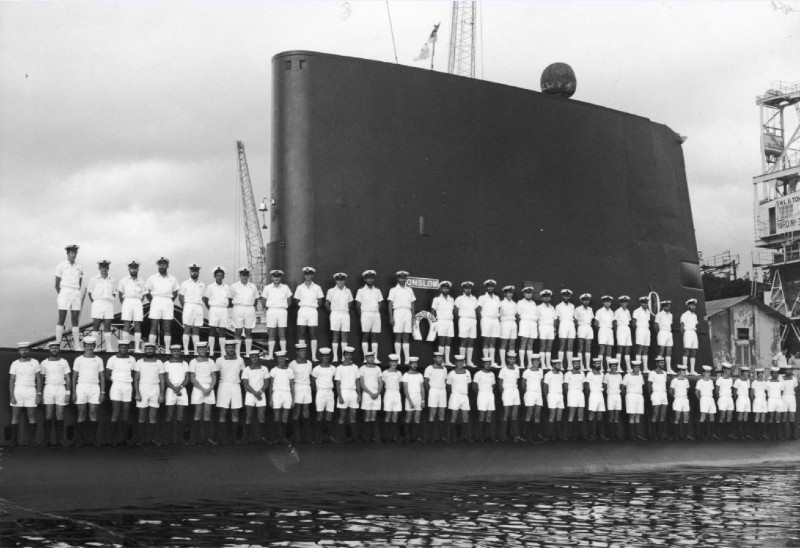 The crew of HMAS Onslow at the Singapore naval base in June 1974. National Maritime Collection gift from John Hodges, 00038504

Sometimes danger was internal and a lot less serious. Oakley remembers that a fight once broke out over a sausage:4

The tiniest little things could crack a person up and I’ve seen guys, sitting in the mess and one guy doesn’t want to eat anything and he’s got a sausage on his plate and another guy is watching and goes ‘Can I have your sausage?’ ‘No’. ‘But you’re not going to eat it!’ ‘I know, but you can’t have it.’ And a fight starts over a sausage, but it’s over in about 30 seconds.

One element of life on board that everyone seemed to hate was the strong smell of diesel fuel. As Lieutenant-Commander Geoff Anderson recalls:5

Gary Oakley likewise remembers that when he came home from work, all his clothes were soaked in diesel fumes. As a consequence, his wife would make him get showered and changed into clean clothing before he was allowed back in the house.6

Officer Victor Macintosh recalls the air quality in general on board was ‘disgusting’, and if you were on patrol, ‘you were basically going well over 12 hours a day without fresh air’.7

To be a submariner takes a fairly unique level of qualities … You live in a very confined space and you live on top of each other, and it doesn’t matter whether you’re the captain or the lowest of the seamen – the reality is, you’ve still got to get along with each other and live in that very confined space.

As we recognise the 51st anniversary of HMAS Onslow arriving in Sydney for the first time, we can’t wait for the vessel to re-open in the near future so you too can discover the danger and drama faced by those who served aboard.

View all posts by Laura Signorelli→
Posted in: Vessels
↑